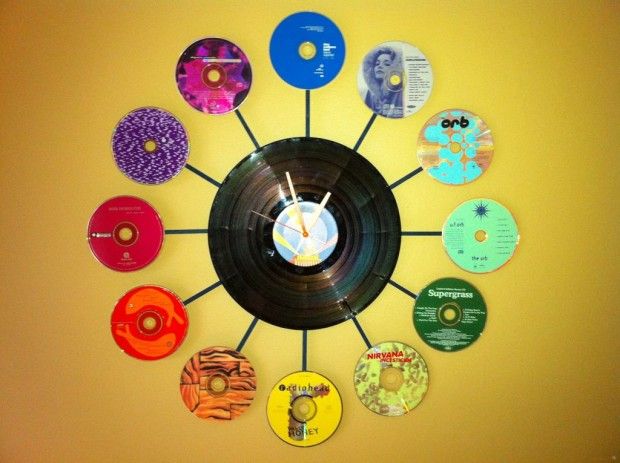 Do you still have a pile of compact discs? If so, why? When was the last time you listened to one? Like almost everyone else, you probably stream your music today. If you are just outdated, you listen to music you bought from iTunes or GooglePlay and store on your mobile device. But it would be considered prehistoric to tell people you carry around CDs for listening in your car – because you surely don’t own a portable CD player.

As the chart shows, CD sales exploded from nothing in 1983 to nearly 1B units in 2000. Now sales are less than 1/10th that number, due to the market shift expanded bandwidth allowed. 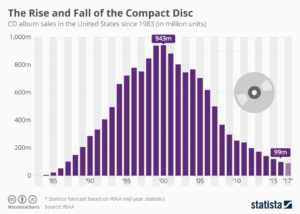 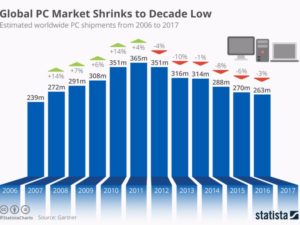 Do you still carry a laptop? If so, you are a dying minority. As PCs became more portable they became indispensable. Nobody left the office, or attended a meeting, without their laptop. That trend exploded until 2011, when PC sales peaked at 365M units. As the chart shows, in the 6 years since, PC sales have dropped by over 100M units, a 30% decline. The advent of mobile devices (smartphones and tablets) coupled with expanded connectivity and growing cloud services allowed mobility to reach entirely new levels – and people stopped carrying their PCs. And just like CDs are disappearing, so will PCs.

These charts dramatically show how quickly a new technology, or package of technologies, can change the way we behave. Simultaneously, they change the competitive landscape. Sony dominated the music industry, as a producer and supplier of hardware, when CDs dominated. But, as I wrote in 2012, the shift to more portable music caused Sony to fall into a rapid decline, and the company suffered 6 consecutive years (24 quarters) of falling sales and losses. The one-time giant was crippled by a technology shift they did not adopt. And they weren’t alone, as big box retailers such as Best Buy and Circuit City also faltered when these sales disappeared.

Once, Microsoft was synonymous with personal technology. Nobody maximized the value in PC growth more than Microsoft. But changing technology altered the competitive landscape, with Apple, Google, Samsung and Amazon emerging as the leaders. Microsoft, as the almost unnoticed launch of Windows 10 demonstrated, is struggling to maintain relevancy.

Too often we discount trends. Like Sony and Microsoft we think historical growth will continue, unabated. We find ways to discount market shifts, saying the products are “niche” and denigrating their quality. We will express our view that the market has “hiccuped” and will return to growth again. By the time we admit the shift is permanent new competitors have overtaken the lead, and we risk becoming totally obsolete. Like Toys-R-Us, Radio Shack, Sears and Motorola.

Aircraft stalls when not enough power to climb

The time for action is when the very first signs of shift happened. I’ve written a lot about “Growth Stalls” and they occur in just 2 quarters. 93% of the time a stalled company never again grows at a mere 2%/year. Look at how fast GE went from the best company in America to the worst. It is incredibly important that leadership react FAST when trends push customers toward new solutions, because it often takes very little time for the trend to make dying markets completely untenable.