How Google Stole the Show from Apple 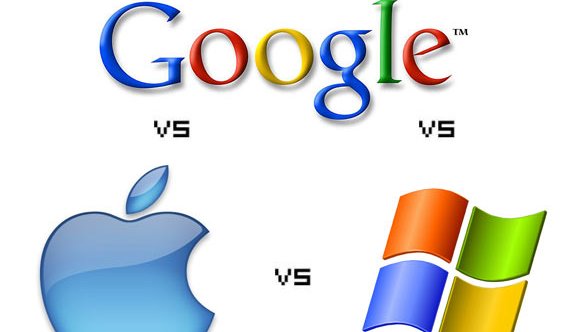 The three highest valued publicly traded companies today (2/3/16) are Google/Alphabet, Apple and Microsoft.  All 3 are tech companies, and they compete – although with different business models – in multiple markets. However, investor views as to their futures are wildly different.  And that has everything to do with how the leadership teams of these 3 companies have explained their recent results, and described their futures.

Looking at the financial performance of these companies, it is impossible to understand the price/earnings multiple assigned to each. Apple clearly had better revenue and earnings performance in all but the most recent year.  Yet, both Alphabet and Microsoft have price to earnings (P/E) multiples that are 3-4 times that of Apple.

Much was made this week about Alphabet’s valuation exceeding that of Apple’s.  But the really big story is the difference in multiples. If Apple had a multiple even half that of Alphabet or Microsoft it’s value would be much, much higher.

But, as we can see, investors did the best over both 2 years and 5 years by investing in Microsoft.  And Apple investors have fared the poorest of all 3 companies regardless of time frame.  Looking at investment performance, one would think that the revenue and earnings performance of these companies would be the reverse of what’s seen in the first chart.

The missing piece, of course, is future expectations.  In this column a few days ago, I pointed out that Apple has done a terrible job explaining its future.  In that column I pointed out how Facebook and Amazon both had stratospheric P/E multiples because they were able to keep investors focused on their future growth story, even more than their historical financial performance.

Alphabet stole the show, and at least briefly the #1 valuation spot, from Apple by convincing investors they will see significant, profitable growth.  Starting even before earnings announcements the company was making sure investors knew that revenues and profits would be up.  But even more they touted the notion that Alphabet has a lot of growth in non-monetized assets.  For example, vastly greater ad sales should be expected from YouTube and Google Maps, as well as app sales for Android phones through Google Play.  And someday on the short horizon profits will emerge from Fiber transmission revenues, smart home revenues via Nest, and even auto market sales now that the company has logged over 1million driverless miles.

This messaging clearly worked, as Alphabet’s value shot up.  Even though 99% of the company’s growth was in “core” products that have been around for a decade!  Yes, ad revenue was up 15%, but most of that was actually on the company’s own web sites.  And most was driven by further price erosion.  The number of paid clicks were up 30%, but price/click was actually down yet another 15% – a negative price trend that has been happening for years. Eventually prices will erode enough that volume will not make up the difference – and what will investors do then?  Rely on the “moonshot” projects which still have almost no revenue, and no proven market performance!

But, the best performer has been Microsoft.  Investors know that PC sales have been eroding for years, that PC sales will continue eroding as users go mobile, and that PC’s are the core of Microsoft’s revenue.  Investors also knows that Microsoft missed the move to mobile, and has practically no market share in the war between Apple’s iOS and Google’s Android.  Further, investors have known forever that gaming (xBox,) search and entertainment products have always been a money-loser for Microsoft.  Yet, Microsoft investors have done far better than Apple investors, and long-term better than Google investors!

Microsoft has done an absolutely terrific job of constantly trumpeting itself as a company with a huge installed base of users that it can leverage into the future.  Even when investors don’t know how that eroding base will be leveraged, Microsoft continually makes the case that the base is there, that Microsoft is the “enterprise” brand and that those users will stay loyal to Microsoft products.

Microsoft trumpeted that its Surface tablet sales rose 22% in the last quarter!  Yay! Of course there was no mention that in just the last 6 weeks of the quarter Apple’s newly released iPad Pro actually sold more units than all Surface tablets did for the entire quarter!  Or that Microsoft’s tablet market share is barely registerable, not even close to a top 5 player, while Apple still maintains 25% share.  And investors are so used to the Microsoft failure in mobile phones that the 49% further decline in sales was considered acceptable.

Instead Microsoft kept investors focused on improvements to Windows 10 (that’s the one you can upgrade to for free.)  And they made sure investors knew that Office 365 revenue was up 70%, as 20million consumers now use the product.  Of course, that is a cumulative 20million – compared to the 75million iPhones Apple sold in just one quarter.  And Azure revenue was up 140% – to something that is almost a drop in the bucket that is AWS which is over 10 times the size of all its competitors combined.

To many, this author included, the “growth story” at Microsoft is more than a little implausible.  Sales of its core products are declining, and the company has missed the wave to mobile.  Developers are writing for iOS first and foremost, because it has the really important installed base for today and tomorrow.  And they are working secondarily on Android, because it is in some flavor the rest of the market.  Windows 10 is a very, very distant third and largely overlooked.  xBox still loses money, and the new businesses are all relatively quite small.  Yet, investors in Microsoft have been richly rewarded the last 5 years.

Meanwhile, investors remain fearful of Apple.  Too many recall the 1980s when Apple Macs were in a share war with Wintel (Microsoft Windows on Intel processors) PCs.  Apple lost that war as business customers traded off the Macs ease of use for the lower purchase cost of Windows-based machines.  Will Apple make the same mistake?  Will iPad sales keep declining, as they have for 2 years now?  Will the market shift to mobile favor lower-priced Android-based products?  Will app purchases swing from iTunes to Google Play as people buy lower cost Android-based tablets?  Have iPhone sales really peaked, and are they preparing to fall?  What’s going to happen with Apple now?  Will the huge Apple mobile share be eroded to nothing, causing Apple’s revenues, profits and share price to collapse?

This would be an interesting academic discussion were the stakes not so incredibly high.  As I said in the opening paragraph, these are the 3 highest valued public companies in America.  Small share price changes have huge impacts on the wealth of individual and institutional investors.  It is rather quite important that companies tell their stories as good as possible (which Apple clearly has not, and Microsoft has done extremely well.)  And likewise it is crucial that investors do their homework, to understand not only what companies say, but what they don’t say.