Why Everyone Knows TV is Dying, Yet Marketing Leaders Over-spend on TV 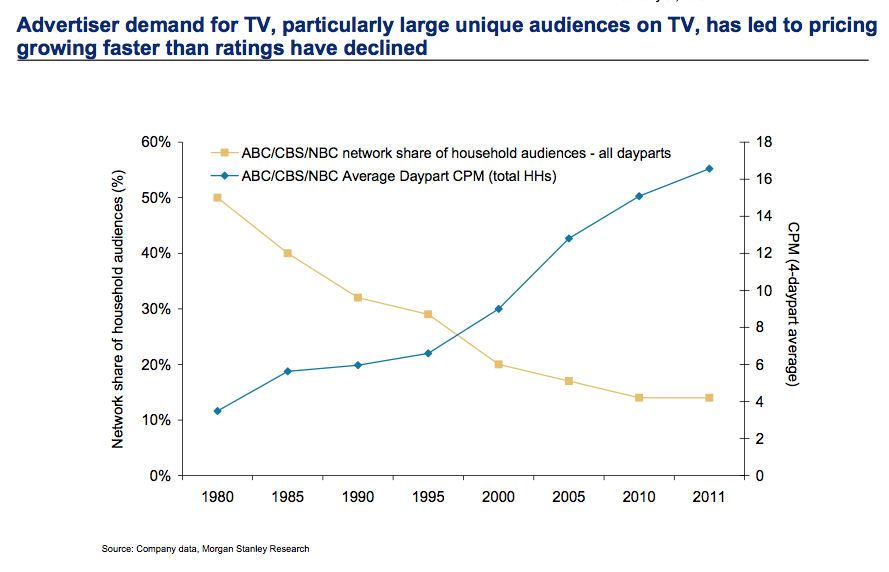 The trend toward the death of broadcast TV as we’ve known it keeps moving forward.  This trend may not happen as fast as the death of desktop computers, but it is a lot faster than glacier melting.

This television season (through October) Magna Global has reported that even the oldest viewers (the TV Generation 55-64) watched 3% less TV.  Those 35-54 watched 5% less.  Gen Xers (25-34) watched 8% less, and Millenials (18-24) watched a whopping 14% less TV.  Live sports viewing is not even able to maintain its TV audience, with NFL viewership across all networks down 10-19%.

Everyone knows what is happening.  People are turning to downloaded entertainment, mostly on their mobile devices.  With a trend this obvious, you’d think everyone in the media/TV and consumer goods industries would be rethinking strategy and retooling for a new future.

But, you would be wrong.  Because despite the obviousness of the trend, emotional ties to hoping the old business sticks around are stronger than logic when it comes to forecasting. 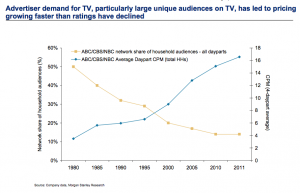 CBS predicted at the beginning of 2014 TV ad revenue would grow 4%.  Oops.  Now CBS’s lead forecaster is admitting he was way off, and adjusted revenues were down 1% for the year.  But, despite the trend in viewer behavior and ad expenditures in 2014, he now predicts a growth of 2% for 2015.

That, my young friends, is how “hockey stick” forecasts are created.  A lot of old assumptions, combined with a willingness to hope trends will be delayed, and you can ignore real data while promising people that the future will indeed look like the past – even when it defies common sense.

To compensate for fewer ads the networks have raised prices on all ads.  But how long can that continue?  This requires a really committed buyer (read more about CMO weaknesses below) who simply refuses to acknowledge the market has shifted and the dollars need to shift with it.  That cannot last forever.

Meanwhile, us old folks can remember the days when Nielsen ratings determined what was programmed on TV, as well as what advertisers paid.  Nielsen had a lock on measuring TV audience viewing, and wielded tremendous power in the media and CPG world.

But now AC Nielsen is struggling to remain relevant.  With TV viewership down, time shifting of shows common and streaming growing like the proverbial weed Nielsen has no idea what entertainment the public watches.  They don’t know what, nor when, nor where.  Unwilling to move quickly to develop tools for catching all the second screen viewing, Nielsen has no plan for telling advertisers what the market really looks like – and the company looks to become a victim of changing markets.

Which then takes us to looking at those folks who actually buy ads that drive media companies.  The Chief Marketing Officers (CMOs) of CPG companies.  Surely these titans of industry are on top of these trends, and rapidly shifting their spending to catch the viewers with the most ads placed for the lowest cost.

Unfortunately, because these senior executives are in the oldest age groups, they are a victim of their own behavior.  They still watch TV, so assume others must as well.  If there is cyber-data saying they are wrong, well they simply discount that data.  The Nielsen’s aren’t accurate, but these execs still watch the ratings “because it’s the best info we have” – a blatant untruth by the way.  But Nielsen does conveniently reinforce their built in assumptions, and their hope that they won’t have to change their media spend plans any time soon.

Further, very few of these CMOs actually use social media.  The vast majority watch their children, grandchildren and young employees use mobile devices constantly – and they bemoan all the activity on YouTube, Facebook, Instagram and Twitter – or for the most part even Linked-in.  But they don’t actually USE these products.  They don’t post information.  They don’t set up and follow channels.  They don’t connect with people, share information, exchange photos or tell stories on social media. Truthfully, they ignore these trends in their own lives.  Which leaves them woefully inept at figuring out how to change their company marketing so it can be more relevant.

The trend is obvious.  The answer, equally so.  Any modern marketer should be an avid user of social media.  Most network heads and media leaders are farther removed from social media than the Pope! They don’t constantly download entertainment, and exchanging with others on all the platforms.  They can’t manage the use of these channels when they don’t have a clue how they work, or how other people use them, or understand why they are actually really valuable tools.

Are you using these modern tools? Are you actually living, breathing, participating in the trends?  Or are you, like these outdated execs, biding your time wasting money on old programs while you look forward to retirement?  And likely killing your company.

When trends emerge it is imperative we become part of that trend.  You can’t simply observe it, because your biases will lead you to hope the trend reverts as you continue doing more of the same.  A leader has to adopt the trend as a leader, be a practicing participant, and learn how that trend will make a substantial difference in the business.  And then apply some vision to remain relevant and successful.