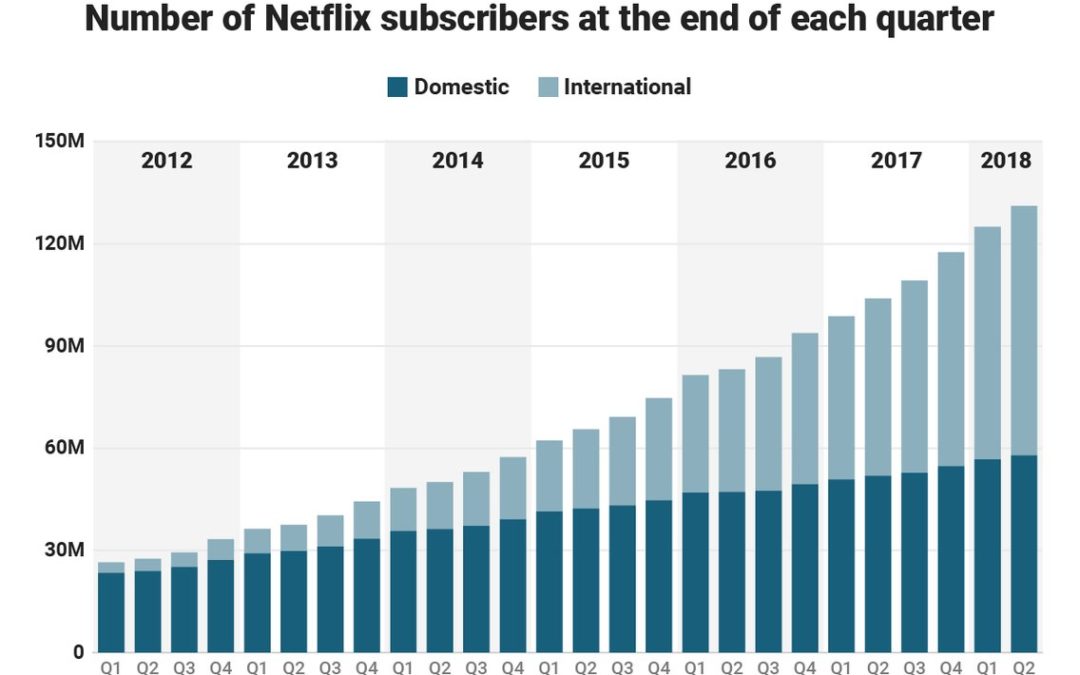 Netflix announced new subscriber numbers last week – and it exceeded expectations. Netflix now has over 130 million worldwide subscribers. This is up 480% in just the last 6 years – from under 30 million. Yes, the USA has grown substantially, more than doubling during this timeframe. But international growth has been spectacular, growing from almost nothing to 57% of total revenues. International growth the last year was 70%, and the contribution margin on international revenues has transitioned from negative in 2016 to over 15% – double the 4th quarter of 2017. 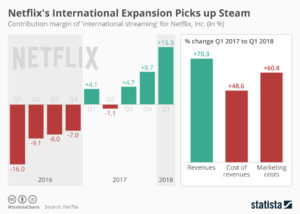 Accomplishing this is a remarkable story. Most companies grow by doing more of the same. Think of Walmart that kept adding stores. Then adding spin-off store brand Sam’s Club. Then adding groceries to the stores. Walmart never changed its strategy, leaders just did “more” with the old strategy. That’s how most people grow, by figuring out ways to make the Value Delivery System (in their case retail stores, warehouses and trucks) do more, better, faster, cheaper. Walmart never changed its strategy.

But Netflix is a very different story. The company started out distributing VHS tapes, and later DVDs, to homes via USPS, UPS and Fedex. It was competing with Blockbuster, Hollywood Video, Family Video and other traditional video stores. It won that battle, driving all of them to bankruptcy. But then to grow more Netflix invested far outside its “core” distribution skills and pioneered video streaming, competing with companies like DirecTV and Comcast. Eventually Netflix leaders raised prices on physical video distribution, cannibalizing that business, to raise money for investing in streaming technology. Streaming technology, however, was not enough to keep growing subscribers. Netflix leadership turned to creating its own content, competing with moviemakers, television and documentary producers, and broadcast television. The company now spends over $6B annually on content.

Think about those decisions. Netflix “pivoted” its strategy 3 times in one decade. Its “core” skill for growth changed from physical product distribution to network technology to content creation. From a “skills” perspective none of these have anything in common.

How did Netflix do that? By focusing on its Value Proposition. By realizing that it’s Value Proposition was “delivering entertainment” Netflix realized it had to change its skill set 3 times to compete with market shifts. Had Netflix not done so, its physical distribution would have declined due to the emergence of Amazon.com, and eventually disappeared along with tapes and DVDs. Netflix would have followed Blockbuster into history. And as bandwidth expanded, and global networks grew, and dozens of providers emerged streaming purchased content profits would have become a bloodbath. Broadcasters who had vast libraries of content would sell to the cheapest streaming company, stripping Netflix of its growth. To continue growing, Netflix had to look at where markets were headed and redirect the company’s investments into its own content.

This is not how most companies do strategy. Most try to figure out one thing they are good at, then optimize it. They examine their Value Delivery System, focus all their attention on it, and entirely lose track of their Value Proposition. They keep optimizing the old Value Delivery System long after the market has shifted. For example, Walmart was the “low cost retailer.” But e-commerce allows competitors like Amazon.com to compete without stores, without advertising and frequently without inventory (using digital storefronts to other people’s inventory.) Walmart leaders were so focused on optimizing the Value Delivery System, and denying the potential impact of e-commerce, that they did not see how a different Value Delivery System could better fulfill the initial Walmart Value Proposition of “low cost.” The Walmart strategy never took a pivot – and now they are far, far behind the leader, and rapidly becoming obsolete.

That fundamental strategy flaw is killing companies right and left – Radio Shack, Toys-R-Us and dozens of other retailers. Who needs maps when you have smartphone navigation? Smartphones put an end to Rand McNally. Who needs an expensive watch when your phone has time and so much more? Apple Watch sales in 2017 exceeded the entire Swiss watch industry. Who needs CDs when you can stream music? Sony sales and profits were gutted when iPods and iPhones changed the personal entertainment industry. (Anyone remember “boom boxes” and “Walkman”?)

I’ve been a huge fan of Netflix. In 2010, I predicted it was the next Apple or Google. When the company shifted strategy from delivering physical entertainment to streaming in 2011, and the stock tanked, I made the case for buying the stock. In 2015 when the company let investors know it was dumping billions into programming I again said it was strategically right, and recommended Netflix as a good investment. And I redoubled my praise for leadership when the “double pivot” to programming was picking up steam in 2016. You don’t have to be mystical to recognize a winner like Netflix, you just have to realize the company is using its strategy to deliver on its Value Proposition, and is willing to change its Value Delivery System because “core strength” isn’t important when its time to change in order to meet new market needs.