Netflix Valuation is Not a “House of Cards” 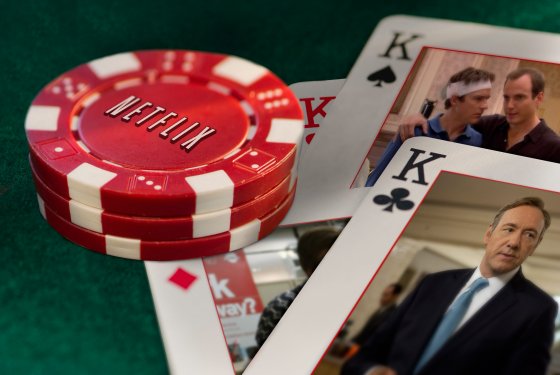 The Netflix hit series “House of Cards” was released last night.  Most media reviewers and analysts are expecting huge numbers of fans will watch the show, given its tremendous popularity the last 2 years.  Simultaneously, there are already skeptics who think that releasing all episodes at once “is so last year” when it was a newsworthy event, and no longer will interest viewers, or generate subscribers, as it once did.  Coupled with possible subscriber churn, some think that “House of Cards” may have played out its hand.

So, the success of this series may have a measurable impact on the valuation of Netflix.  If the “House of Cards” download numbers, which are up to Netflix to report, aren’t what analysts forecast many may scream for the stock to tumble; especially since it is on the verge of reaching new all-time highs.  The Netflix price to earnings (P/E) multiple is a lofty 107, and with a valuation of almost $29B it sells for just under 4x sales. 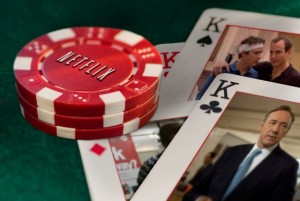 But investors should ignore any, and in fact all, hype about “House of Cards” and whatever analysts say about Netflix.  So far, they’ve been wildly wrong when making forecasts about the company.  Especially when projecting its demise.

That is the definition of volatility.

Netflix is a disruptive innovator.  And, simply put, stock analysts don’t know how to value disruptive innovators. Because their focus is all on historical numbers, and then projecting those historicals forward.  As a result, analysts are heavily biased toward expecting incumbents to do well, and simultaneously being highly skeptical of any disruptive company.  Disruptors challenge the old order, and invalidate the giant excel models which analysts create.  Thus analysts are very prone to saying that incumbents will remain in charge, and that incumbents will overwhelm any smaller company trying to change the industry model.  It is their bias, and they use all kinds of historical numbers to explain why the bigger, older company will project forward well, while the smaller, newer company will stumble and be overwhelmed by the entrenched competitor.

And that leads to volatility.  As each quarter and year comes along, analysts make radically different assumptions about the business model they don’t understand, which is the disruptor.  Constantly changing their assumptions about the newer kid on the block, they make mistake after mistake with their projections and generally caution people not to buy the disruptor’s stock.  And, should the disruptor at any time not meet the expectations that these analysts invented, then they scream for shareholders to dump their holdings.

Netflix first competed in distribution of VHS tapes and DVDs.  Netflix sent them to people’s homes, with no time limit on how long folks could keep them.  This model was radically different from market leader Blockbuster Video, so analysts said Blockbuster would crush Netflix, which would never grow.  Wrong.  Not only did Blockbuster grow, but it eventually drove Blockbuster into bankruptcy because it was attuned to trends for convenience and shopping from home.

As it entered streaming video, analysts did not understand the model and predicted Netflix would cannibalize its historical, core DVD business thus undermining its own economics.  And, further, much larger Amazon would kill Netflix in streaming.  Analysts screamed to dump the stock, and folks did.  Wrong.  Netflix discovered it was a good outlet for syndication, created a huge library of not only movies but television programs, and grew much faster and more profitably than Amazon in streaming.

Then Netflix turned to original programming.  Again, analysts said this would be a huge investment that would kill the company’s financials. And besides that people already had original programming from historical market leaders HBO and Showtime.  Wrong.  By using analysis of what people liked from its archive, Netflix leadership hedged its bets and its original shows, especially “House of Cards” have been big hits that brought in more subscribers.  HBO and Showtime, which have depended on cable companies to distribute their programming, are now increasingly becoming additional programming on the Netflix distribution channel.

Investors should own Netflix because the company’s leadership, including CEO Reed Hastings, are great at disruptive innovation.  They identify unmet customer needs and then fulfill those needs.  Netflix time and again has demonstrated it can figure out a better way to give certain user segments what they want, and then expand their offering to eat away at the traditional market.  Once it was retail movie distribution, increasingly it is becoming cable distribution via companies like ComCast, AT&T and Time Warner.

And investors must be long-term.  Netflix is an example of why trading is a bad idea – unless you do it for a living.  Most of us who have full time day jobs cannot try timing the ups and downs of stock movements.  For us, it is better to buy and hold.  When you’re ready to buy, buy. Don’t wait, because in the short term there is no way to predict if a stock will go up or down.  You have to buy because you are ready to invest, and you expect that over the next 3, 5, 7 years this company will continue to drive growth in revenues and profits, thus expanding its valuation.

Netflix, like Apple, is a company that has mastered the skills of disruptive innovation.  While the competition is trying to figure out how to sustain its historical position by doing the same thing better, faster and cheaper Netflix is figuring out “the next big thing” and then delivering it.  As the market shifts, Netflix is there delivering on trends with new products – and new business models – which push revenues and profits higher.

That’s why it would have been smart to buy Netflix any time the last 13 years and simply held it.  And odds are it will continue to drive higher valuations for investors for many years to come.  Not only are HBO, Showtime and Comcast in its sites, but the broadcast networks (ABC, CBS, NBC) are not far behind.  It’s a very big media market, which is shifting dramatically, and Netflix is clearly the leader.  Not unlike Apple has been in personal technology.