Tesla Model 3 – This is What a “Game Changer” Looks Like 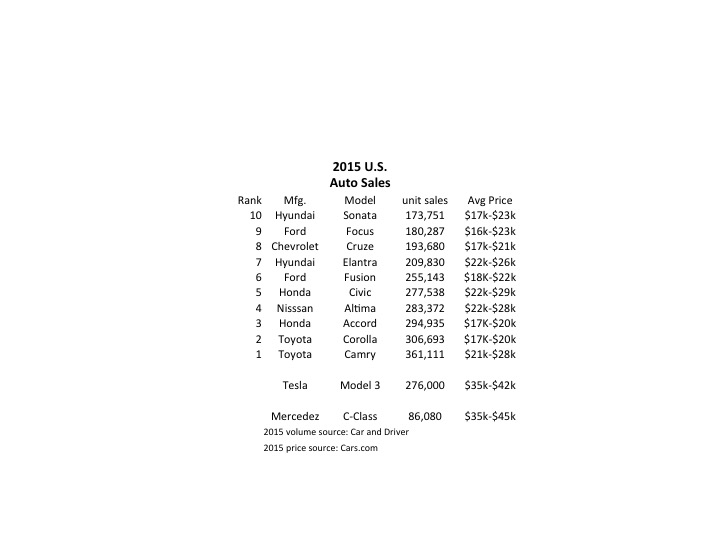 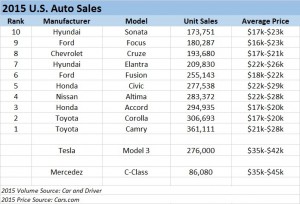 Remarkably, the Model 3 would rank as the 6th best selling vehicle all of last year!  And with just a few more orders, it will likely make the top 5 – or possibly top 3! And those are orders placed in just one week, versus an entire year of sales for the other models.  And every buyer is putting up a $1,000 deposit, something none of the buyers of top 10 cars did as they purchased product widely available in inventory. [Update 7 April – Tesla reports sales exceed 325,000, which would make the Model 3 the second best selling car in the USA for the entire year 2015 – accomplished in less than one week.]

Tesla has historically been selling much more expensive cars, the Model S being its big seller in 2015.  So if we classify Tesla as a “luxury” brand and compare it to like-priced Mercedes Benz C-Class autos we see the volumes are, again, remarkable.  In under 1 week the Model 3 took orders for 3 times the volume of all C-Class vehicles sold in the U.S. in 2015.

Although this has surprised a large number of people, the signs were all pointing to something extraordinary happening.  The Tesla Model S sold 50,000 vehicles in 2015 at an average price of $70,000 to $80,000.  That is the same number of the Mercedes E-Class autos, which are priced much lower in the $50,000 range.  And if you compare to the  top line Mercedes S-Class, which is only slightly more expensive at an average $90,0000, the Model S sold over 2 times the 22,000 units Mercedes sold.  And while other manufacturers are happy with single digit percentage volume growth, in Q4 Tesla shipments were 75% greater in 2015 than 2014.

In other words, people like this brand, like these cars and are buying them in unprecedented numbers.  They are willing to plunk down deposits months, possibly years, in advance of delivery.  And they are paying the highest prices ever for cars sold in these volumes.  And demand clearly outstrips supply.

Yet, Tesla is not without detractors.  From the beginning some analysts have said that high prices would relegate  the brand to a small niche of customers.  But by outselling all other manufacturers in its price point, Tesla has demonstrated its cars are clearly not a niche market.  Likewise many analysts argued that electric cars were dependent on high gasoline prices so that “economic buyers” could justify higher prices.  Yet, as gasoline prices have declined to prices not seen for nearly a decade Tesla sales keep going up.  Clearly Tesla demand is based on more than just economic analysis of petroleum prices.

People really like, and want, Tesla cars.  Even if the prices are higher, and if gasoline prices are low.

Emerging is a new group of detractors.  They point to the volume of cars produced in 2015, and first quarter output of just under 15,000 vehicles, then note that Tesla has not “scaled up” manufacturing at anywhere near the necessary rate to keep customers happy.  Meanwhile, constructing the “gigafactory” in Nevada to build batteries has slowed and won’t meet earlier expectations for 2016 construction and jobs. Even at 20,000 cars/quarter, current demand for Model S and Model 3 They project lots of order cancellations would take 4.5 years to fulfill.

Which leads us to the beauty of sales growth.  When products tap an under- or unfilled need they frequently far outsell projections.  Think about the iPod, iPhone and iPad.  There is naturally concern about scaling up production.  Will the money be there?  Can the capacity come online fast enough?

Of course, of all the problems in business this is one every leader should want.  It is certainly a lot more fun to worry about selling too much rather than selling too little.  Especially when you are commanding a significant price premium for your product, and thus can be sure that demand is not an artificial, price-induced variance.

With rare exceptions, investors understand the value of high sales at high prices.  When gross margins are good, and capacity is low, then it is time to expand capacity because good returns are in the future.  The Model 3 release projects a backlog of almost $12B.  Booked orders at that level are extremely rare.  Further, short-term those orders have produced nearly $300million of short-term cash.  Thus, it is a great time for an additional equity offering, possibly augmented with bond sales, to invest rapidly in expansion.  Problematic, yes.  Insolvable, highly unlikely.

On the face of it Tesla appears to be another car company.  But something much more significant is afoot.  This sales level, at these prices, when the underlying economics of use seem to be moving in the opposite direction indicates that Tesla has tapped into an unmet need.  It’s products are impressing a large number of people, and they are buying at premium prices.  Based on recent orders Tesla is vastly outselling competitive electric automobiles made by competitors, all of whom are much bigger and better resourced.  And those are all the signs of a real Game Changer.