McDonald’s: Here’s Why Your New Big Mac Is Doomed

McDonald’s has been trying for years to re-ignite growth. But, unfortunately for customers and investors alike, leadership keeps going about it the wrong way. Rather than building on new trends to create a new McDonald’s, they keep trying to defend extend the worn out old strategy with new tactics.

Recently McDonald’s leadership tested a new version of the Big Mac,first launched in 1967. They replaced the “special sauce” with Sriracha sauce in order to make the sandwich a bit spicier. They are now rolling it out to a full test market in central Ohio with 128 stores. If this goes well – a term not yet defined – the sandwich could roll out nationally.

This is a classic sustaining innovation. Take something that exists, make a minor change, and offer it as a new version. The hope is that current customers keep buying the original version, and the new version attracts new customers. Great idea, if it works. But most of the time it doesn’t.

Unfortunately, most people who buy a product like it the way it is. Slower Big Mac sales aren’t due to making bad sandwiches. They’re due to people changing their buying habits to new trends. Fifty years ago a Big Mac from McDonald’s was something people really wanted. Famously, in the 1970s a character on the TV series Good Times used to become very excited about going to eat his weekly Big Mac.

People who are still eating Big Macs know exactly what they want. And it’s the old Big Mac, not a new one. Thus the initial test results were “mixed” – with many customers registering disgust at the new product.  Just like the failure of New Coke, a New Big Mac isn’t what customers are seeking.

After 50 years, times and trends have changed. Fewer people are going to McDonald’s, and fewer are eating Big Macs. Many new competitors have emerged, and people are eating at Panera, Panda Express, Zaxby’s, Five Guys and even beleaguered Chipotle. Customers are looking for a very different dining experience, and different food. While a version two of the Big Mac might have driven incremental sales in 1977, in 2017 the product has grown tired and out of step with too many people and there are too many alternative choices.

Similarly, McDonald’s CEO’s effort to revitalize the brand by adding ordering kiosks and table service in stores, in a new format labeled the “Experience of the Future,” will not make much difference.  Due to the dramatic reconfiguration, only about 500 stores will be changed – roughly 3.5% of the 14,500 McDonald’s. It is an incremental effort to make a small change when competitors are offering substantially different products and experiences.

When a business, brand or product line is growing it is on a trend. Like McDonald’s was in the 1960s and 1970s, offering quality food, fast and at a consistent price nationwide at a time when customers could not count on those factors across independent cafes. At that time, offering new products – like a Big Mac – that are variations on the theme that is riding the trend is a good way to expand sales.

But over time trends change, and adding new features has less and less impact. These sustaining innovations, as Clayton Christensen of Harvard calls them, have “diminishing marginal returns.” That’s an academic’s fancy way of saying that you have to spend ever greater amounts to create the variations, but their benefits keep having less and less impact on growing, or even maintaining, sales. Yet, most leaders keep right on trying to defend & extend the old business by investing in these sustaining measures, even as returns keep falling.

Over time a re-invention gap is created between the customer and the company. Customers want something new and different, which would require the business re-invent itself. But the business keeps trying to tweak the old model. And thus the gap. The longer this goes on, the bigger the re-invention gap. Eventually customers give up, and the product, or company, disappears. 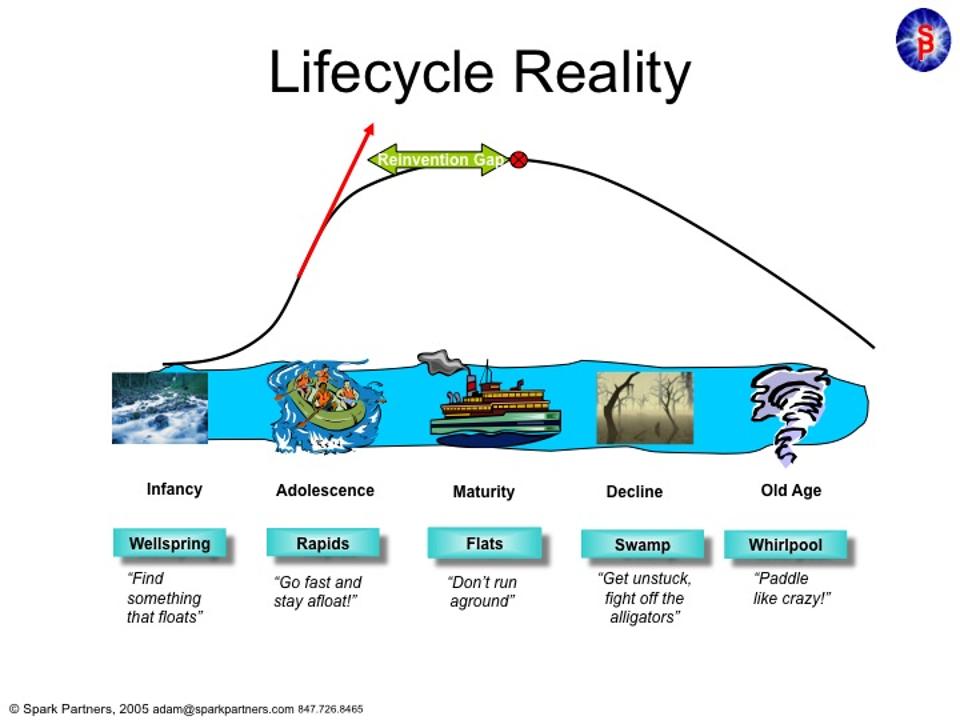 Think about portable hand held AM radios. If someone gave you the best one in the world you wouldn’t care. Same for a really good portable cassette tape player. Now you listen to your portable music on a phone.  Companies like Zenith were destroyed, and Sony made far less profitable, as the market shifted from radios and cathode-ray televisions to more portable, smarter, better products.

Motorola, one of the radio pioneers, survived this decline by undertaking a “strategic pivot.”  Motorola invested in cell phone technology and transformed itself into something entirely new and different – from a radio maker into a pioneer in mobile phones. (Of course leadership missed the transition to apps and smart phones, and now Motorola Solutions is a ghost of the former company.)

McDonald’s could have re-invented itself a decade ago when it owned Chipotle’s. Leadership could have stopped investing in McDonald’s and poured money into Chipotle’s, aiding the cannibalization of the old while simultaneously capturing a strong position on the new trend. But instead of pivoting, leadership sold Chipotle’s and used the money to defend & extend the already tiring McDonald’s brand.

Strategic pivots are hard.  Just look at Netflix, which pivoted from sending videos in the mail to streaming, and is pivoting again into original content. But, they are a necessity if you want to keep growing. Because eventually all strategies become out of step with changing trends, and sustaining innovations fail to keep customers.

McDonald’s needs a very different strategy. It has hit a growth stall, and has a very low probability of ever growing consistently at even 2%. The company needs a lot more than sriracha sauce on a Big Mac if it is to spice up revenue and profit growth.