Innovation – Why Bezos Succeeded, While Lampert Failed at Sears 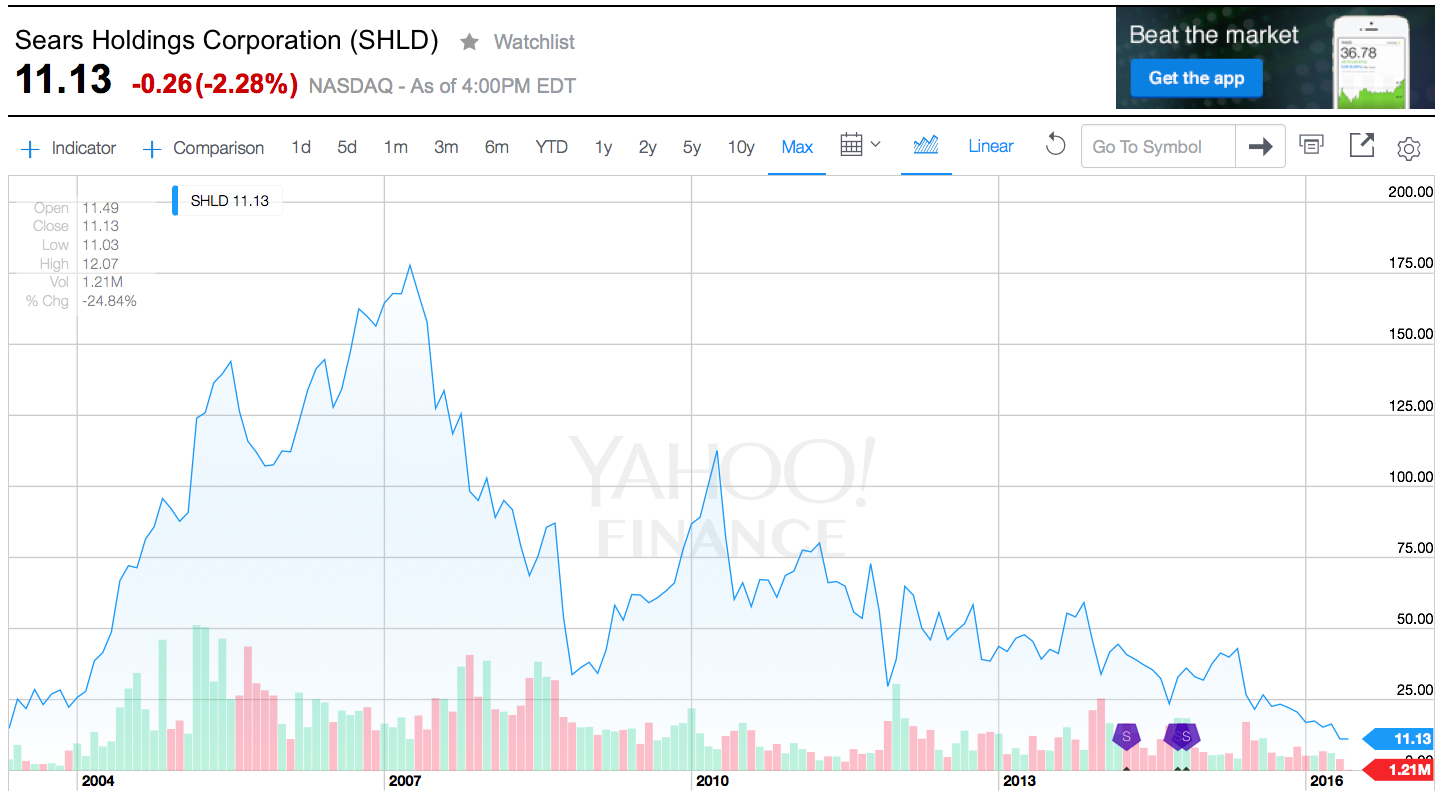 Last week Sears announced sales and earnings.  And once again, the news was all bad.  The stock closed at a record, all time low.  One chart pretty much sums up the story, as investors are now realizing bankruptcy is the most likely outcome. 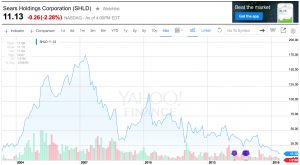 Quick Rundown:  In January, 2002 Kmart is headed for bankruptcy.  Ed Lampert, CEO of hedge fund ESL, starts buying the bonds.  He takes control of the company, makes himself Chairman, and rapidly moves through proceedings.  On May 1, 2003, KMart begins trading again.  The shares trade for just under $15 (for this column all prices are adjusted for any equity transactions, as reflected in the chart.)

Lampert quickly starts hacking away costs and closing stores.  Revenues tumble, but so do costs, and earnings rise.  By November, 2004 the stock has risen to $90.  Lampert owns 53% of Kmart, and 15% of Sears.  Lampert hires a new CEO for Kmart, and quickly announces his intention to buy all of slow growing, financially troubled Sears.

In March, 2005 Sears shareholders approve the deal.  The stock trades for $126.  Analysts praise the deal, saying Lampert has “the Midas touch” for cutting costs. Pumped by most analysts, and none moreso than Jim Cramer of “Mad Money” fame (Lampert’s former roommate,) in 2 years the stock soars to $178 by April, 2007.  So far Lampert has done nothing to create value but relentlessly cut costs via massive layoffs, big inventory reductions, delayed payments to suppliers and store closures.

Homebuilding falls off a cliff as real estate values tumble, and the Great Recession begins.  Retailers are creamed by investors, and appliance sales dependent Sears crashes to $33.76 in 18 months.  On hopes that a recovering economy will raise all boats, the stock recovers over the next 18 months to $113 by April, 2010.  But sales per store keep declining, even as the number of stores shrinks.  Revenues fall faster than costs, and the stock falls to $43.73 by January, 2013 when Lampert appoints himself CEO.  In just under 2.5 years with Lampert as CEO and Chairman the company’s sales keep falling, more stores are closed or sold, and the stock finds an all-time low of $11.13 – 25% lower than when Lampert took KMart public almost exactly 13 years ago – and 94% off its highs.

Sears became a retailing juggernaut via innovation.  When general stores were small and often far between, and stocking inventory was precious, Sears invented mail order catalogues.  Over time almost every home in America was receiving 1, or several, catalogues every year.  They were a major source of purchases, especially by people living in non-urban communities.  Then Sears realized it could open massive stores to sell all those things in its catalogue, and the company pioneered very large, well stocked stores where customers could buy everything from clothes to tools to appliances to guns.  As malls came along, Sears was again a pioneer “anchoring” many malls and obtaining lower cost space due to the company’s ability to draw in customers for other retailers.

To help customers buy more Sears created customer installment loans. If a young couple couldn’t afford a stove for their new home they could buy it on terms, paying $10 or $15 a month, long before credit cards existed.  The more people bought on their revolving credit line, and the more they paid Sears, the more Sears increased their credit limit. Sears was the “go to” place for cash strapped consumers.  (Eventually, this became what we now call the Discover card.)

In 1930 Sears expanded the Allstate tire line to include selling auto insurance – and consumers could not only maintain their car at Sears they could insure it as well.  As its customers grew older and more wealthy, many needed help with financia advice so in 1981 Sears bought Dean Witter and made it possible for customers to figure out a retirement plan while waiting for their tires to be replaced and their car insurance to update.

To put it mildly, Sears was the most innovative retailer of all time.  Until the internet came along.  Focused on its big stores, and its breadth of products and services, Sears kept trying to sell more stuff through those stores, and to those same customers.  Internet retailing seemed insignificantly small, and unappealing.  Heck, leadership had discontinued the famous catalogues in 1993 to stop store cannibalization and push people into locations where the company could promote more products and services. Focusing on its core customers shopping in its core retail locations, Sears leadership simply ignored upstarts like Amazon.com and figured its old success formula would last forever.

But they were wrong. The traditional Sears market was niched up across big box retailers like Best Buy, clothiers like Kohls, tool stores like Home Depot, parts retailers like AutoZone, and soft goods stores like Bed, Bath & Beyond.  The original need for “one stop shopping” had been overtaken by specialty retailers with wider selection, and often better pricing.  And customers now had credit cards that worked in all stores.  Meanwhile, for those who wanted to shop for many things from home the internet had taken over where the catalogue once began.  Leaving Sears’ market “hollowed out.”  While KMart was simply overwhelmed by the vast expansion of WalMart.

What should Lampert have done?

There was no way a cost cutting strategy would save KMart or Sears.  All the trends were going against the company.  Sears was destined to keep losing customers, and sales, unless it moved onto trends.  Lampert needed to innovate.  He needed to rapidly adopt the trends.  Instead, he kept cutting costs. But revenues fell even faster, and the result was huge paper losses and an outpouring of cash.

To gain more insight, take a look at Jeff Bezos.  But rather than harp on Amazon.com’s growth, look instead at the leadership he has provided to The Washington Post since acquiring it just over 2 years ago. Mr. Bezos did not try to be a better newspaper operator.  He didn’t involve himself in editorial decisions.  Nor did he focus on how to drive more subscriptions, or sell more advertising to traditional customers.  None of those initiatives had helped any newspaper the last decade, and they wouldn’t help The Washington Post to become a more relevant, viable and profitable company.  Newspapers are a dying business, and Bezos could not change that fact.

Mr. Bezos focused on trends, and what was needed to make The Washington Post grow.  Media is under change, and that change is being created by technology.  Streaming content, live content, user generated content, 24×7 content posting (vs. deadlines,) user response tracking, readers interactivity, social media connectivity, mobile access and mobile content — these are the trends impacting media today.  So that was where he had leadership focus.  The Washington Post had to transition from a “newspaper” company to a “media and technology company.”

So Mr. Bezos pushed for hiring more engineers – a lot more engineers – to build apps and tools for readers to interact with the company.  And the use of modern media tools like headline testing.  As a result, in October, 2015 The Washington Post had more unique web visitors than the vaunted New York Times.  And its lead is growing.  And while other newspapers are cutting staff, or going out of business, the Post is adding writers, editors and engineers. In a declining newspaper market The Washington Post is growing because it is using trends to transform itself into a company readers (and advertisers) value.

CEO Lampert could have chosen to transform Sears Holdings.  But he did not.  He became a very, very active “hands on” manager.  He micro-managed costs, with no sense of important trends in retail.  He kept trying to take cash out, when he needed to invest in transformation.  He should have sold the real estate very early, sensing that retail was moving on-line.  He should have sold outdated brands under intense competitive pressure, such as Kenmore, to a segment supplier like Best Buy.  He then should have invested that money in technology.  Sears should have been a leader in shopping apps, supplier storefronts, and direct-to-customer distribution.  Focused entirely on defending Sears’ core, Lampert missed the market shift and destroyed all the value which initially existed in the great retail merger he created.

Every company must understand critical trends, and how they will apply to their business.  Nobody can hope to succeed by just protecting the core business, as it can be made obsolete very, very quickly.  And nobody can hope to change a trend.  It is more important than ever that organizations spend far less time focused on what they did, and spend a lot more time thinking about what they need to do next.  Planning needs to shift from deep numerical analysis of the past, and a lot more in-depth discussion about technology trends and how they will impact their business in the next 1, 3 and 5 years.

Sears Holdings was a 13 year ride.  Investor hope that Lampert could cut costs enough to make Sears and KMart profitable again drove the stock very high.  But the reality that this strategy was impossible finally drove the value lower than when the journey started.  The debacle has ruined 2 companies, thousands of employees’ careers, many shopping mall operators, many suppliers, many communities, and since 2007 thousands of investor’s gains. Four years up, then 9 years down. It happened a lot faster than anyone would have imagined in 2003 or 2004.  But it did.

And it could happen to you.  Invert your strategic planning time.  Spend 80% on trends and scenario planning, and 20% on historical analysis.  It might save your business.