Will Living Wage Trend Kill or Make McDonald’s and Walmart? 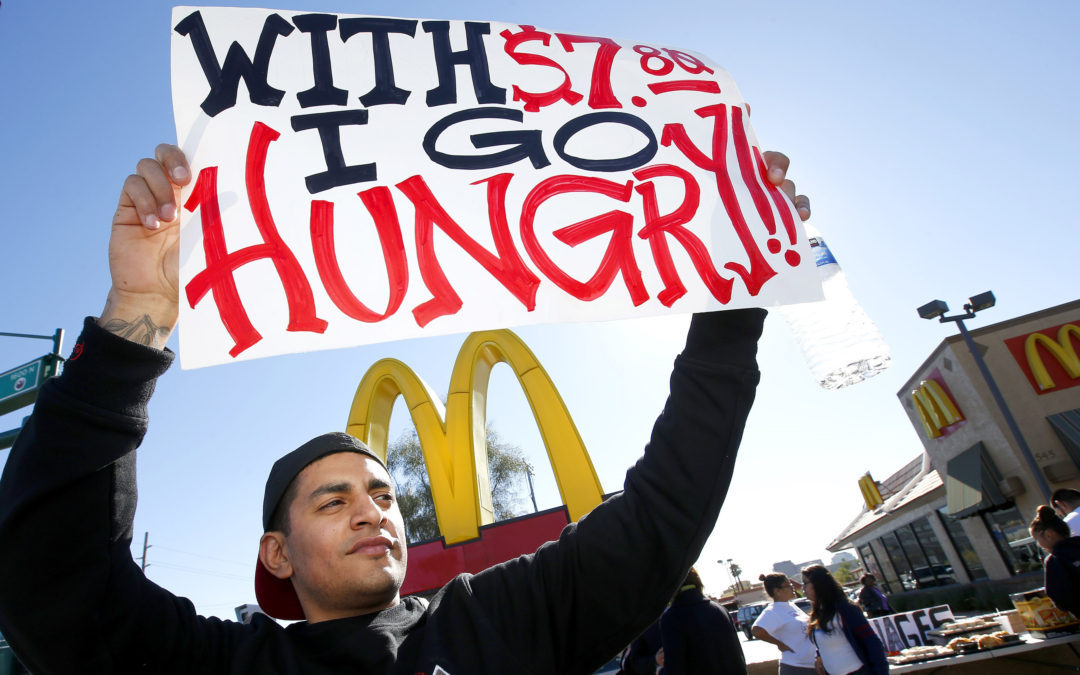 Alex Robles protests in front of a McDonald’s in 2013, in Phoenix. (AP Photo/Ross D. Franklin)

Horatio Alger wrote books in the 1800s about young poor boys who became wealthy via clean living and hard work.  Americans loved the idea that anyone can become rich, and loved those stories.  We love them as much today as then, clinging to the non-rich roots of successes like Steve Jobs.

Unfortunately, such possibilities have been growing tougher in America.  Today U.S. income inequality is among the highest in the world, while income mobility is among the lowest.  You are more likely to go from rags to riches in France or Germany than the USA.  Net/net – in current circumstances your most important decision is who will be your parents, because if you are born rich you will likely live a rich life, while if  you are born poor you’ll probably die poor.

Organizations like Occupy Wall Street have tried to bring the problem of inequality and jobs to the face of America – with mixed results.  But the truth is that 80% of Americans will face poverty and unemployment in their lifetimes.  And the biggest growth in poverty, declining marriage rates and single mother households all belong to white Americans today.  These poverty related issues are no longer tied to skin color or immigration they way they once were.

It’s safe to say that a lot of Americans are sounding like the famous Howard Beale phrase from the 1976 movie “Network” and starting to say “I’m mad as hell, and I’m not going to take this any more!”

This situation has given birth to a new trend – frequently referred to as the “living wage.”  A living wage allows one parent to earn enough money from a single 40 hour per week job to feed, cloth, educate, transport and otherwise lead a decent life for a family of 4.  Today in America this is in the range of $13.50-$15.00 per hour.

This, of course, should not be confused with the minimum wage which is a federally (or state) mandate to pay a specific minimum hourly wage.  Because the minimum wage is lower than living wage, a movement has been started to match the two numbers – something which would roughly double today’s $7.25 federal minimum wage.

This concept would have been heresy just 40 years ago.  America’s Chamber of Commerce and other pro-business groups have long attempted to abolish the minimum wage, and have fought hard against any and every increase.

As the income inequality gap has widened popularity has grown for this movement, however, and now 70% of Americans support higher minimum wages, almost 3 times those who don’t.  Whether effective or not, this week fast food employees took to old fashioned strikes and picket lines in New York City, Chicago, St. Louis, Milwaukee and Detroit for higher wages.

Regardless of your opinion about the economics (or politics) of such a move, the trend is definitely building for taking action.

The biggest industries affected by such an increase would be fast food and retail.  And if these companies don’t do something to adapt to this trend the results could be pretty severe.

McDonald’s is the largest fast food company.  And it definitely does not pay a living wage.  The company recently published for employees a budget for trying to live on a McDonald’s income, and it translated into requiring employees work 2 full-time jobs.  Rancor about the posted budget was widespread, as even pro-business folks found it amazing a company could put out such a document while its CEO (and other execs) make many multiples of what most employees earn.

Estimates are that a wage increase to $15/hour for employees would cost McDonald’s $8B.  McDonald’s showed $10B of Gross Income in 2012, and $8B of Pre-Tax Income.  Obviously, should the living wage movement pass nationally McDonald’s investors would see a devastating impact.  Simultaneously, prices would have to increase hurting customers and suppliers would likely be pinched to the point of losses.

Couple this with McDonald’s laissez-faire attitude about obesity trends, and you have two big trends that don’t bode well for rising returns for shareholders.  Yet, other than opposing regulations and government action on these matters McDonald’s has shown no ability to adapt to these rather important, and impactful, trends.  Hoping there will be no legislation is a bad strategy.  Fighting against any change, given the public health and economic situation, is as silly as fighting against regulations on tobacco was in the 1960s.  But so far there has been no proposed adaptation to McDonald’s 50 year old success formula offered to investors, employees, customers or legislators.

WalMart is America’s largest retailer.  And the most vitriolic opposing higher wages.  Even though a living wage increase would cost customers only $12/year.  When Washington, DC passed a requirement retailers pay a living wage WalMart refused to build and open 4 proposed new stores.  Even though the impact would be only $.46/customer visit (estimated at $12.50/customer/year.)

It would seem such harsh action, given the small impact, is a bit illogical.  Given that WalMart is already out of step with the trend toward on-line shopping, why would the company want to take such an additional action fighting against a trend that affects not only its profits, but most of its customers — who would benefit from a rise in income and buying power?

In 1914 Henry Ford was suffering from high turnover and a generally unhappy workforce.  He reacted by doubling pay – with his famous “$5 day”.  Not only did he reduce turnover, he became the perferred employer in his industry – and rather quickly it became clear that employees who formerly could not afford an automobile were able to now become customers at the new, higher pay scale.  Apparently nobody at WalMart is familiar with this story.  Or they lack the will to apply it.

Fighting trends is expensive. Yet, most leadership teams become stuck defending & extending an old strategy – an old success formula – even after it is out of date.  Most companies don’t fail because the leadership is incompetent, but rather because they fail to adapt to trends and changing circumstances.  Long-lived companies are those which build for future scenarios, rather than trying to keep the world from changing by spending on lobbyists, advertising and other efforts to halt (or reverse) a trend.

McDonald’s and WalMart (and for that matter Yum Brands, Wendy’s, JCPenney, Sears, Best Buy and a whole host of other companies) are largely unwilling to admit that the future is likely to look different than the past.  Will that kill them?  It sure won’t help them.  But investors could feel a lot more comfortable (as would employees, suppliers and customers) if they would develop and tell us about their strategies to adapt to changing circumstances.

Are you looking at trends, developing scenarios about the future and figuring out how to adapt in ways that will help you profitably grow?  Or are you stuck defending and extending an old success formula even as markets shift and trends move customers in different directions?