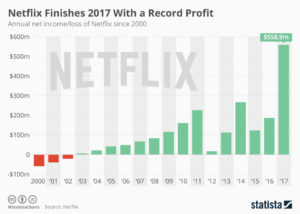 Back in 2004 I wrote that Blockbuster was dead meat – because by going after streaming Netflix would make Blockbuster obsolete. Netflix was using external data to project its future, and thus its strategy was not to defend & extend its DVD rental business but to spend strongly to grow the replacement. In 2010 I wrote that Netflix had projected the complete demise of DVDs by 2013, and was thus investing all its resources into streaming in order to be the market leader. At the time NFLX was $15.68. Over the next year it took off, tripling in value to $42.16. By cannibalizing DVDs it’s strategy was to leave its competition in a dying marketplace.

But, investors weren’t as sure of the Netflix strategy as I was. They feared cannibalizing DVDs would cut out the “core” of Netflix and kill the company. By October, 2011 the stock had tumbled to $12 (a drop of over 70%.) But, with the stock at new lows after a year of declines I optimistically wrote “The Case for Buying Netflix. Really.” I told readers the stock analysts were wrong, and the Netflix strategy was spot-on.

Netflix went nowhere for the next year, trading between $9 and $12. But then in December, 2012 investors started seeing the results of Netflix strategy, with fast growing streaming subscriber rates. By January, 2014 the stock was trading north of $52, so those who bought when my article published made a 400% return in just over 2 years! By March, 2015 NFLX was up another 23%, to $62 when I told readers “Netflix Valuation Was Not a House of Cards.” The Netflix strategy to dominate streaming by offering its own content may have shocked a lot of people, due to the investment size, but it was the strategy that would allow Netflix to grow subscribers globally. That has driven the last jump, to $250 in just under 3 years – another 400%+ return!

Strategy matters- to company performance, and thus long-term investor returns. Netflix has been a volatile stock, and it has had plenty of naysayers. These were people looking only short-term, and fearful of strategic pivots that have proven highly valuable. If you want your company, and your investment portfolio, to succeed it is imperative you understand external trends and use them to develop the right strategy. And heed my forecasts.