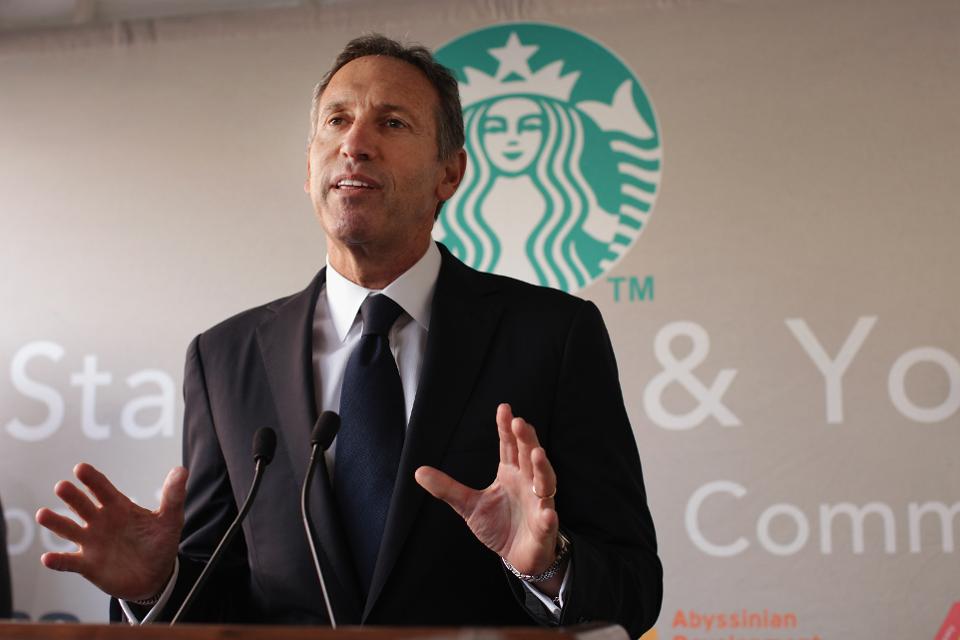 Howard Schultz is one of those CEO legends.   Like Steve Jobs, Larry Ellison, Jeff Bezos and Mark Zuckerberg, he turned a startup into a huge, mega-billion dollar company – and in the process created an entirely new market. This isn’t easy to do, and that’s why business acolytes and the media turn these people into heroes.

But, is it right to hand-wring over Schultz’s departure as CEO? After all, things have not been pretty for investors since Mr. Jobs turned over Apple to his hand-picked successor Tim Cook. However, could this change mean something better is in store for shareholders?

First, let’s address the very popular myth that when Mr. Schultz left Starbucks in 2000 his successors nearly destroyed the company – and Starbucks was saved only by Mr. Schultz returning with his tremendous creativity and servant leadership. While it is great propaganda for making the Schultz as hero story more appealing, it isn’t exactly accurate.

Starting in 1982, Howard Schultz built Starbucks from four stores to over 2,800 (and over $2 billion revenue) in 16 years. That was a tremendous success. And he is to be lauded. But when he left, Starbucks had only 35o stores outside the USA. It was an American phenomenon, a place to buy and drink coffee, with every store company owned, every employee company trained, and not an ounce of variability in the business model. Not exactly diversified. At the time, the stock traded for roughly (split adjusted) $4 per share.

His successor, Orin Smith, far outperformed Mr. Schultz, more than tripling the chain to over 9,000 stores and expanding revenue to over $5 billion in just four years! He expanded the original model internationally, began adding many new varieties of coffee and other drinks, and even added food.  These enhancements were tremendously successful at bringing in additional revenue, even if the average store revenue fell as smaller stores were added in places like airports, hotels and entertainment venues.

In 2005, Jim Donald replaced Mr. Smith. By 2007 (in just teo years) he added a staggering additional 4,000 stores. He expanded the menu. And he even branched out to selling branded Starbucks coffee on airplanes, in hotels and even retailed in grocery stores. Further, he launched a successful international coffee liqueur under the Starbucks brand. And he moved the company into entertainment, creating an artist representation company and even producing movies (Akeelah and the Bee) which won multiple awards.

But Mr. Schultz did not like the diversification, even if it produced more revenue and profit. He joined the chorus of analysts that beat down the P/E ratio, and the stock price, as the company expanded beyond its “core” coffee store business.

When the Great Recession hit, and people realized they could live without $4 per cup of coffee and a $50 per day habit, revenues plummeted, as they did for many restaurants and retailers. Mr. Schultz seized the opportunity to return to his old job as CEO. That the downturn in Starbucks had far more to do with the greatest economic debacle since the 1930s was overlooked as Mr. Schultz blamed everything on the previous CEO and his leadership team – firing them all.

What returning CEO Schultz did was far from creative.   He simply stopped all the projects that didn’t fit  his definition of the “core” Starbucks he created. And he closed 600 stores in 2009 then 300 more in 2010 – making the chain smaller as new store openings stopped. Although the popular myth is that Starbucks stagnated under Mr. Schultz successors, the opposite was true. The chain expanded both its “core” and new incremental revenues from 2000 though 2008. But as Mr. Schultz returned as CEO from 2008 through 2011 Starbucks actually did stagnate , with virtually no growth.

But, more realistically one should compare the price today to that of 2006, before the entire market crashed and analysts turned negative on the profitable Starbucks diversification and business model expansion. That gain is a more modest 300% – basically a tripling over a decade – far less a gain for investors than happened under the 2000-2006 era of Mr. Schultz’s successors.

Mr. Schultz succeeded in returning Starbucks to its “core.” But now he’s leaving a much more vulnerable company. As my fellow Forbes contributor Richard Kestenbaum has noted, retail success requires innovation. Starbucks is now almost everywhere, leaving little room for new store expansion. Yet it has abandoned other revenue opportunities pioneered under Messrs. Smith and Donald. And competition has expanded dramatically – both via direct coffee store competitors and the emergence of new gathering spots like smoothie stores, tech stores and fast casual restaurants that are attracting people away from a coffee addiction.

At some point Starbucks and its competition will saturate the market. And tastes will change. And when that happens, growth will be a lot harder to find. As McDonald’s and WalMart have learned, business models grow tired and customers switch . Exciting new competitors emerge, like Starbucks once was, and Amazon.com is increasingly today.

Mr. Schultz has said he is vastly more confident in this change of leadership than he was the last time he left – largely because he feels this hand-picked team (as if he didn’t pick the last team, by the way) will continue to remain tightly focused on defending and extending Starbucks “core” business. This approach sounds all too familiar – like Jobs selection of Cook – and the risks for investors are great.

A focus on the core has real limits. Diminishing returns do apply. And P/E compression (from the very high 30+ today) could cause Starbucks to lose any investor upside, possibly even cause the stock to decline. If Mr. Schultz’s departure was opening the door for more innovation, new business expansion and a change to new trends that sparked growth one could possibly be excited. But there is real reason for concern – just as happened at Apple.