Bah Humbug Investors In Retail: As Goes Sears, So Will Go Most Traditional Retailers

Sears recently announced it is closing another big batch of stores.  Yawn. Who cares? Sears losses since 2010 are nearly $10 billion, with a $.75 billion loss in just the third quarter. As revenue fell another 13% overall and comparable store sales declined 7.4% investors have fled the stock for years.

Five years ago Sears had 3,510 stores. Now it has 1,687.  It has 750 with leases expiring in the next five years and CFO Jason Hollar has said 550 of those are short-term enough they will let those close.

What’s striking about this statement is that Sears is a perfect candidate to file bankruptcy, renegotiate those leases, and start with a new plan for the future. Unless it has no plan.  Lacking a plan to make its business successful and return those stores to profitability, the CFO is admitting the company has no choice but to keep shrinking assets as Sears simply disappears. Investors should view Sears as a microcosm of trends in traditional brick-and-mortar retailing across the industry. The business is shrinking. Fast 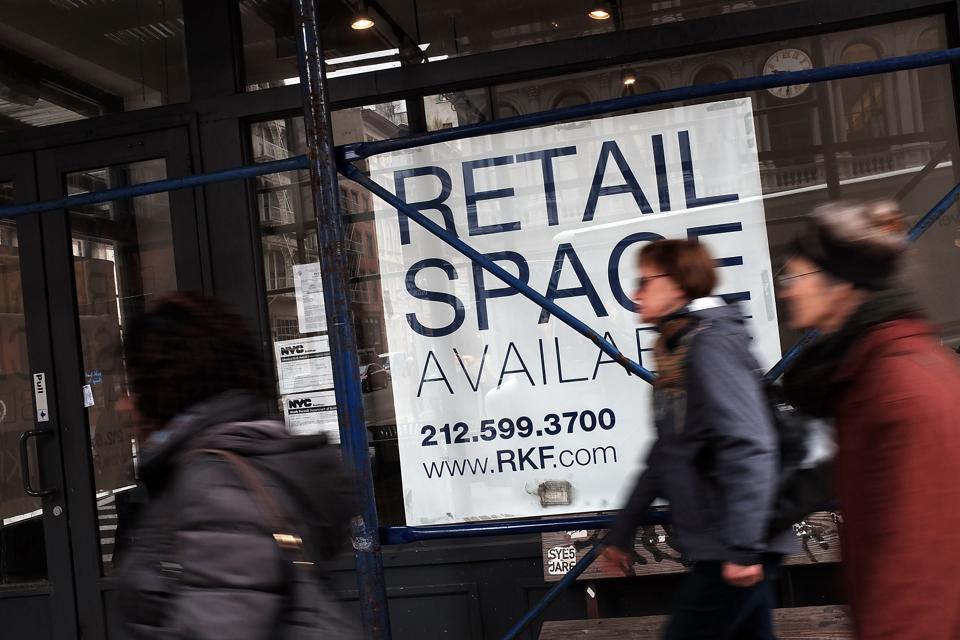 A closed retail store is viewed in Manhattan. (Photo by Spencer Platt/Getty Images)

Sears’ death is the proverbial “canary in the coal mine.”

Just look at retail employment.  Amidst another strong jobs report for November, retail employment actually shrank. This previously only happened in recessions – and 2016 is definitely not a recession year. And all the losses were in traditional store retailing. Kohl’s said it is hiring almost 13% fewer seasonal workers, and Macy’s says it is hiring 2.4% fewer.

Of course, Amazon seasonal hiring is up 20%.

In January, 2015 I wrote how the trend to e-commerce had taken hold, and traditional retailing would never again be the same. For the 2014 holiday season online retail grew 17%, but brick-and-mortar sales actually declined.  This was a pivotal event. It clearly indicated a sea change in the marketplace, and it was clear valuations would be shifting accordingly.  Surprising many, but not those who really understood the trends and market shifts, six months later (July, 2015) Amazon’s market cap exceeded that of much larger Wal-Mart.

ALL trends (including mobile use) reinforce on-line growth, brick and mortar decline.

And this trend is going to continue amplifying as more people do more shopping from mobile devices, which they all  have in their hands most of the day, every day .  E-commerce apps are making the on-line experience constantly better.  On Thanksgiving day 70% of all on-line retail traffic was mobile, and for the first time ever 53% of on-line orders were from mobile devices – exceeding the orders placed on PCs.  With this kind of access, and easy shopping, the need to travel to physical stores accelerates their decline.

Sears is beyond rescue. Unfortunately, there are a number of retailers already so challenged by the on-line competition that they are “the walking dead.” They will falter, and fail, just like the former Dow Jones Industrial retailing giant. They will not make the shift to on-line effectively. They are unwilling to dramatically change their business model, unwilling to cannibalize store sales to create an aggressively competitive on-line business. Expect bad things at JCPenney, Kohl’s, Pier 1 – and weakness at giants Wal-Mart and even Target.

Christmas used to be the time when investors in traditional retail cheered.  Results for the quarter could create great gains in stock values.  But that time is long gone – passed during the 2014 inflection when traditional started declining while e-commerce continued double digit growth.  One can understand the Scrooge-like mentality of those investors, who dread seeing the shift in customers, and valuation, away from their companies and toward the Amazon’s who embrace trends and  market shifts.