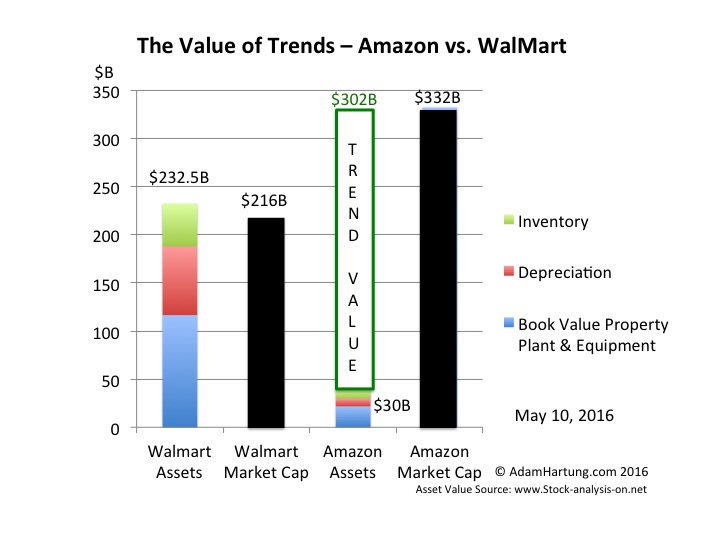 WalMart announced 1st quarter results on Thursday, and the stock jumped almost 10% on news sales were up versus last year.  It was only $1.1B on $115B, about 1%, but it was UP!  Same store sales were also up 1%, but analysts pointed out that was largely due to lower prices to hold competitors at bay.

While investors cheered the news, at the higher valuation WalMart is still only worth what it was in June, 2012 (just under $70/share.)  From then through August, 2015 WalMart traded at a  higher valuation – peaking at $90 in January, 2015.  Subsequent fears of slower sales had driven the stock down to $56.50 by November, 2015.  So this is a recovery for crestfallen investors the last year, but far from new valuation highs.

Unfortunately, this is likely to be just a blip up in a longer-term ongoing valuation decline for WalMart.  And that value will be captured by those who understand the most important, undeniable trend in retail. 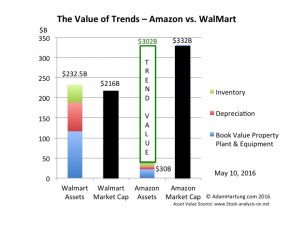 Although the numbers for WalMart’s valuation are a bit better than when the associated chart was completed last week, as you can see WalMart’s assets are greater than the company’s total valuation.  This is because the return on its assets, today and projected, are so low that WalMart must borrow money in order to make them overall worthwhile. And the fact that on the balance sheet, at book value, the assets appear to be some $50B lower due to depreciation, and the difference be cost and market value.

This is because WalMart competes almost entirely in the intensely competitive and asset-dense market of traditional brick-and-mortar retail.  This requires a lot of land, buildings, shelves and inventory.  And that market is barely growing.  Maybe 1-2%/year.

Compare t his with Amazon.  Amazon has about $30B of assets.  Yet its valuation is over $330B.  So Amazon captures an extra value of $300B by competing in the asset sparse market of on-line retailing where it needs little land, few buildings, far less shelving and a lot less inventory.  And it is competing in a market the Commerce Department says is growing at 15%/year.

The trend to on-line sales is extremely important, as it has entirely different customer acquisition and retention requirements, and very different ways of competing.  Amazon understands those trends, and continues to lead its rivals.  Today on-line retail is 10.5% of all non-restaurant, non-bar retail.  And that 15% growth rate accounts for 60% of ALL the growth in this retail segment.  Amazon keeps advancing, growing as fast (or faster) than the industry average, especially in key categories.  Meanwhile, despite its vast resources and best efforts WalMart admitted its on-line sales growth is only 7% – half the segment growth rate – and its growth is decelerating.

By understanding this one trend – a very big, important, powerful trend – Amazon captures more value than the current value of ALL the Walmart stores, distribution centers and their contents.  With all those assets WalMart can only convince investors it is worth about $200B.  With about 13% of the assets used by WalMart, Amazon convinces investors it is worth 33% more than WalMart – over $330B.  That’s $300B of value created just by knowing where the market is headed, and how to deliver for customers in that future market.

Yes, Amazon has other businesses, such as AWS cloud services and tech products in tablets, smartphones and smart speakers.  But these too (some not nearly as successful as others, mind you) are very much on trends.  WalMart once dominated retail technology with its massive computer systems and enormous databases.  But WalMart limited itself to using its technology to defend & extend its core traditional retail business via store forecasts, optimized distribution and extensive pricing schemes.  Amazon is monetizing its technology prowess by, again, leveraging trends and making its services and products available to others.

How does this apply to you?  When someone asks “If you could have anything you want, what would  you ask for?” most of us would start with health, happiness, peace and similar intangibles for us, our families and mankind.  But if forced to make a tangible selection, we would ask for an asset.  Buildings, equipment, cash.  Yet, as WalMart and Amazon show us, those assets are only as valuable as what you do with them.  And thus, it is more valuable to understand the trends, and how to use assets wisely for greatest value, than it is to own a pile of assets.

So the really important question is “Do you know what trends are going to be important to your business, and are you implementing a strategy to leverage those key trends?”  If you are trying to protect your assets, you will likely be overwhelmed by the trend leader.  But if you really understand the trends and are ready to act on them, you could be the one to capture the most value in your marketplace, and likely without adding a lot more costly assets.