Why the ‘Amazon Effect’ Is So Huge In The USA, And Not In Other Countries 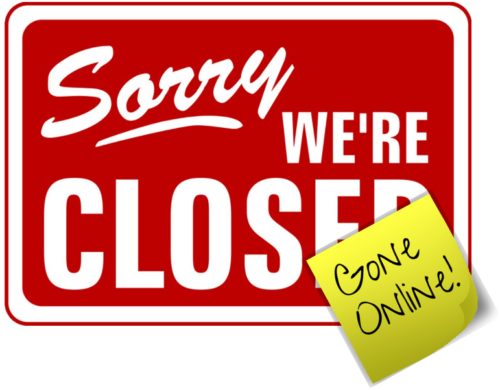 On the day after Memorial Day Amazon stock hit $1,000/share — a new record high. Amazon is up about 40% the last year. It’s market capitalization doubles Wal-mart. And the vast majority of investment analysts expect Amazon to rise further. 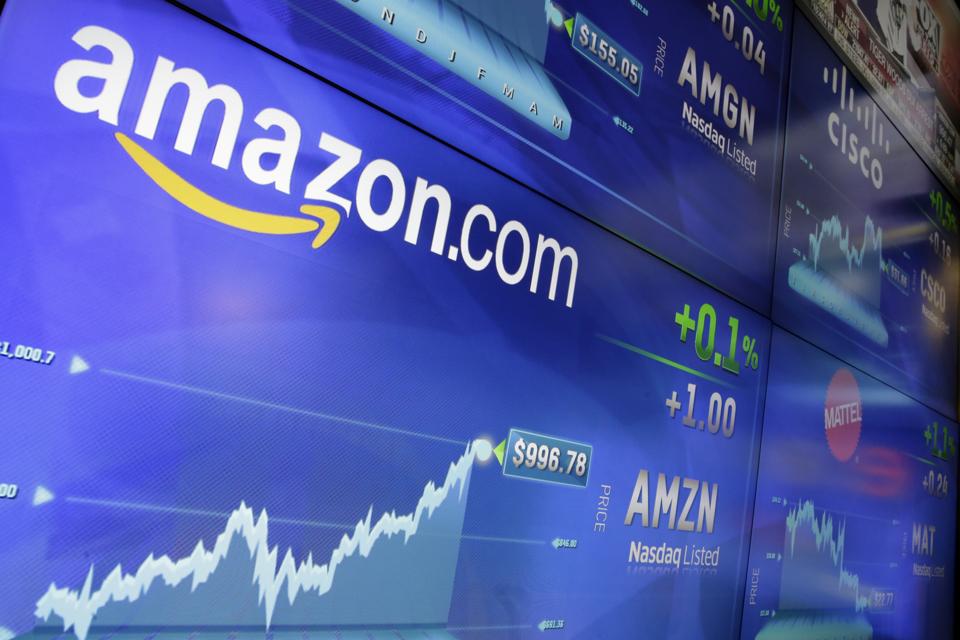 The Amazon logo is displayed at the Nasdaq MarketSite, in New York’s Times Square, Tuesday, May 30, 2017. Online retail giant Amazon.com traded above $1,000 a share for the first time. (AP Photo/Richard Drew)

Amazon competes in dozens of international markets, as do many on-line retailers, yet the ‘Amazon Effect’ is far greater in the USA than anywhere else. And there’s a good reason — America is vastly over-served when it comes to traditional retail. 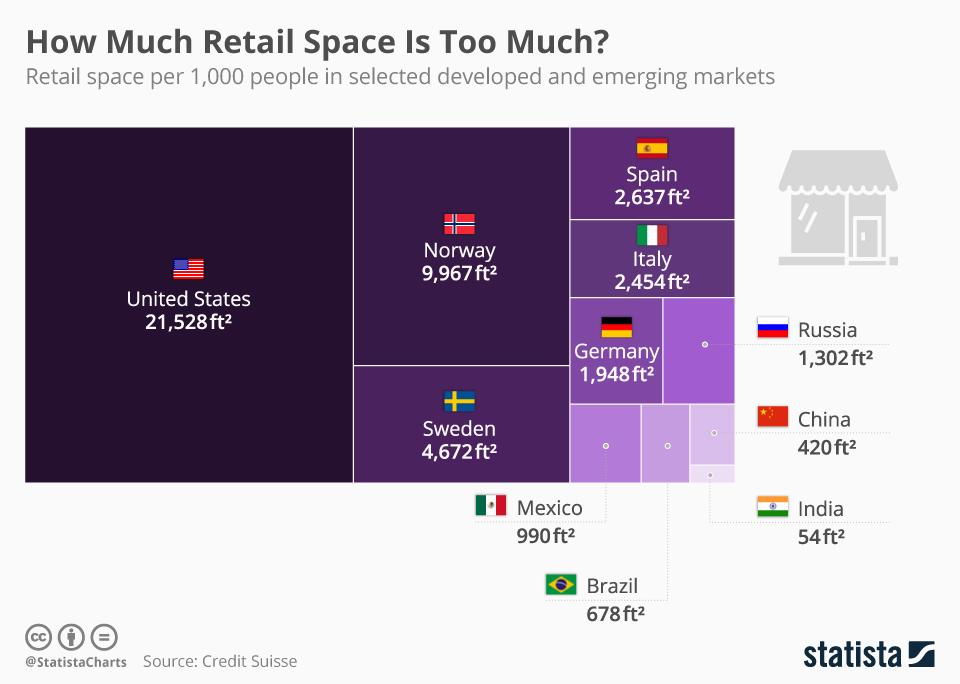 Looking at square feet of retail space per 1,000 people, this infographic shows that, adjusted for population size, the USA has 8x the retail of Spain, 9x the retail of Italy, 11x the retail of Germany, 22x the retail of Mexico, 51x the retail of China and 400x the retail of India! Overall, this is remarkable. I’ve been to all of these countries, and in none did I feel that I was unable to buy things I needed. Clearly, the USA has had such a robust retail sector that it has dramatically over-expanded – with individual stores, suburban strip malls, elaborate horizontal malls, vertical urban malls and multi-floor urban retail complexes far outpacing the needs of American shoppers.

All these stores created a very competitive retail environment. This competition, and the lack of any sort of national value added tax (VAT,) kept prices for most things in America among the lowest in the world. Simultaneously according to the Department of Labor, Retail is the third largest employer in America. Couple that with the enormous wholesale distribution networks of warehouses and truck fleets — and selling things becomes the country’s largest employer — even bigger than the sum total of all federal, state and local government employees .

Additionally, retail has produced the largest local taxes of any industry, combining local sales taxes with property taxes, which has funded schools and public works projects for decades. And this retail space has helped drive demand for all kinds of support services from utilities to maintenance.

U.S. retail consumers are tremendously over-served, and the market is set to collapse

Net/net, America’s consumers are now over-served by retailers. There is too much space, and inventory. And now that store-to-home distribution has faded as a problem, with multiple carriers offering overnight service, people are increasingly happy to avoid stores altogether, greatly exacerbating the overcapacity problem. Thus, the ‘Amazon Effect’ has emerged, where stores are closing at a rapid rate and many retailers are failing altogether leaving vast amounts of empty retail space.

Foreign markets are under-served, and benefit from Amazon’s entry

Contrarily, in other countries consumers were to some extent under-served. They actually dealt with local stock-outs on desirable items. And frequently lived in a world with a lot less product choice. And, generally, international consumers expected to travel farther to shop at the few larger stores, malls and urban shopping centers with greater selections.

In those countries local economies became far less dependent on retail real estate for jobs — and for taxes. Most have little or no property taxes as deployed in the USA. Additionally, rather than adding a local sales tax to the price of goods, most countries use some sort of national VAT to collect the tax during distribution. When Amazon starts distributing in these markets it is seen as a good thing! Consumers have more choice, less hassle and often better service. Also, Amazon collects the VAT so no taxes are lost.

Contrarily, American communities could never stop adding retail space. Whenever Walmart or Best Buy wanted a new store, no community leaders turned down the potential local economic gains. But it led to too much space being built for a healthy sector, and certainly far too much given the market shift to on-line retail. Now retail is a classic over-served market, sort of like the need for stagecoaches and livery barns after the railroads were built.

How much retail space could go vacant in the USA?  Just invert the multiples from above. For the USA to have the same retail space as Spain implies an 87.5% reduction, Italy -89%, Germany -91%, Mexico -95.5%. Thus it is not hard to imagine a full 50-67% of America’s retail space to be empty in just 5 or 10 years. Americans would still have 2-3 times the retail space of other developed markets.

There is no doubt Amazon is a good employer, and on-line sales growth will employ hundreds of thousands at Amazon, and millions across the marketplace. Further, most of those jobs will pay a lot better than traditional retail jobs. But there is no sugar-coating the huge impact the ‘Amazon Effect’ will have on local economies and jobs. America is vastly overbuilt and over-supplied by retailers. There will be a huge shake-out, with dozens of retail failures. And there will be enormous amounts of vacant property sitting around, looking for some kind of alternative use. And local communities will find it difficult to meet constituent needs as sales tax and property tax receipts fall dramatically.

As I wrote in my column on February 28, this is going to be an enormous shift. Far bigger than the offshoring of manufacturing. The ‘Amazon Effect’ is automating retailing in ways never imagined by those who built all that retail space. As people keep buying on-line there will be a collapse of retail space pricing, and a collapse of industry participants.  Industry players always greatly under-estimate these shifts, so they aren’t projecting retail armaggedon. But in short order the need for retail will be like the need for dedicated, raised-floor computer centers to house mainframes, and later network hubs. It’s just going to go away.