Warren Buffett’s Painful IBM Lesson – Have You Learned It?

This February, Warren Buffett admitted he had no faith in IBM. After accumulating a huge position, by 4th quarter of 2017 he sold out almost the entire Berkshire Hathaway position. He lost faith in the IBM CEO Virginia (Ginni) Rometty, who talked big about a turnaround, but it never happened.

Mr. Buffett would have been wise to stopped having “faith” long ago. All the way back in May, 2014 I wrote that IBM was not going to be a turnaround. CEO Rommetty was spending ALL its money on share buybacks, rather than growing its business. The Washington Post made IBM the “poster child” for stupid share buybacks, pointing out that spending over $8B on repurchases had maintained earnings-per-share, and propped up the stock price, but giving IBM the largest debt-to-equity ratio of comparable companies.

IBM was already in a Growth Stall, something about which I’ve written often. Once a company stalls, its odds 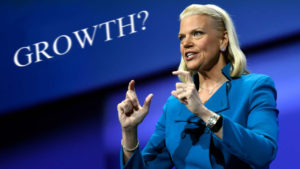 of growing at 2%/year fall to a mere 7%. But it was clear then that the CEO was more interested in financial machinations, borrowing money to repurchase shares and prop up the stock, rather than actually investing in growing the company. The once great IBM was out of step with the tech market, and had no programs in place to make it an industry leader in the future.

By April, 2017 it was clear IBM was a disaster. By then we had 20 consecutive quarters of declining revenue. Amazing. How Rometty kept her job was completely unclear. Five years of shrinkage, while all investments were in buying the stock of its shrinking enterprise – intended to hide the shrink! CEO Rometty continued promising a turnaround, with vague references to the “wonderful” Watson program. But it was clear, Buffett (and everyone else) needed to get out in 2014. So Berkshire ate its losses, took the money and ran.

Have you learned your lesson? As an investor are you holding onto stocks long after leadership has shown they have no idea how to grow revenues? If so, why? Hope is not a strategy.

As a leader, are you still forecasting hockey stick turnarounds, while continuing to invest in outdated products and businesses? Are you hoping your past will somehow create your future, even though competitors and markets have moved on? Are you leading like Rometty, hoping you can hide your failures with financial machinations and Powerpoint presentations about how things will turn your way in the future – even though those assumptions are made out of hole cloth?

It’s time to get real about your investments, and your business. When revenues are challenged, something bad is happening. It’s time to do something. Fast. Before a bad quarter becomes 20, and everyone is giving up.