The No. 1 Trend For Planning — Demographics — And Why People Are Fleeing Illinois

Trend analysis is the most critical part of planning.

Some trends are hard to spot, because people think they are just a fad. Many folks think electric cars fit that category.

Other trends are hard to accept because they imply a big shift in how we live or work – or how we run our business. Scores of IT people who have written me over the years saying mobile devices on common networks (telecom to AWS) will never replace PCs connected to server farms. The implications of this trend are severely negative related to demand for their skills, so they ignore it.

But every plan should be built on trends, because these forecasts are critical for decision-making. It’s the future that matters, not the past. Too often plans are built on history, when trends clearly indicate that things are going to change, and old assumptions are outdated.

Demographic trends are easy to forecast, and important.

While some trends are hard to forecast, some trends are really easy to spot and forecast. And the easiest trend to understand is demographics. If you don’t use any other trends in your planning, you should have demographic trends at the core of your assumptions.

Take for example the movement of people across the United States. Ever since the wagon train people have been moving west. And, like my friend Buckley Brinkman (executive director and CEO of the Wisconsin Center for Manufacturing and Productivity) likes to say, “ever since the invention of air conditioning people have been moving south.” Yet, I’m startled how few organizations plan for this shift and adjust their strategies and tactics to be more successful. 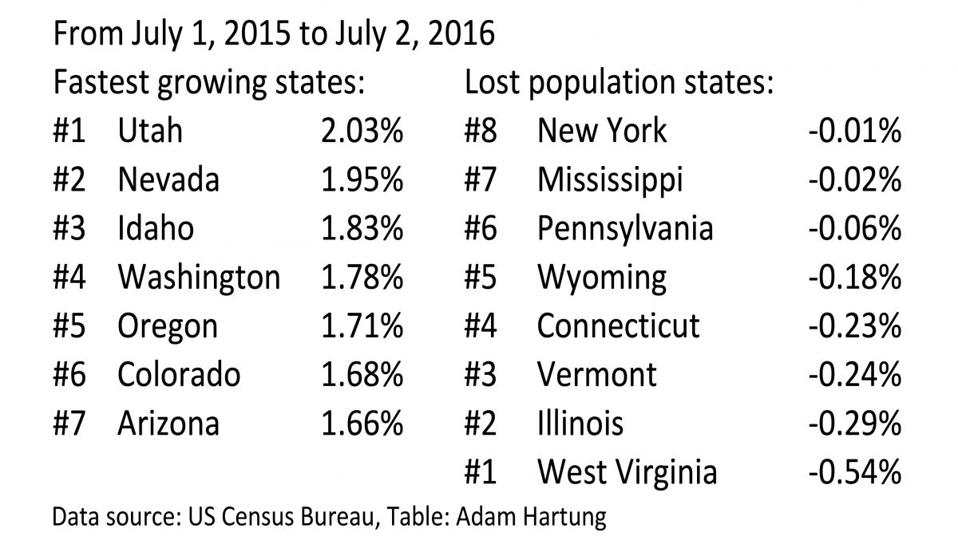 Growth is sublime, decline is disastrous.

Bruce Henderson, founder of the Boston Consulting Group, used to say that if you want to hunt or farm you’re far better off in the Amazon than you are in the Arctic. Basically, where there are resources, and lots of growth, it’s a lot easier to succeed.

For business, this means that if you want to grow your business – whether you’re installing HVAC systems or building a state-of-the-art battery manufacturing plant – you’ll find it relatively easier in faster growing states.  It doesn’t mean there is no competition, but it does mean that growth makes it easier for competitors to succeed.

Contrastingly, there were eight states that lost population in this same 12 months.

This means that competition is intensifying in these states. As people move out there are fewer customers to buy what each business sells, so these companies have to fight harder, and price lower, to grow – or even maintain.  As the population declines taxes have to go up because there are fewer taxpayers to cover government costs. These states become less desirable places for business.

The businesses in Illinois, for example, are in the middle of a bare-knuckle brawl over the state budget that has gone on for two years. The Governor and the legislature cannot agree on how to manage costs, or revenues.  Bond ratings have been slashed as costs to borrow have gone up.  Several services have been shut down, and student costs at universities have gone up while programs have been gutted or discontinued.

Governor Rauner (R – IL) has repeatedly said he wants Illinois to be more like Indiana, its neighbor to the east.  Perversely people apparently are listening, because Illinois is shrinking, while Indiana grew a healthy 0.31%. For residents remaining in Illinois this worsens a host of maladies:

• the state’s jobs situation struggles as the number of paying jobs declines, making it harder to recruit new talent, or even keep its own university graduates;
• Illinois’ pension problems worsen,  as there are fewer people paying into the pension funds while those drawing out funds keep increasing;
• Illinois is unable to fund schools properly, especially Chicago, due to less income – forcing up property taxes;
• taxes keep rising due to fewer people and businesses (when adding property taxes, sales taxes and income taxes Illinois is now the highest tax state in the country);
• new highways are being built with federal funds, but other infrastructure is in trouble, as city, county and state roads are pothole ridden. Trains and subways become outdated and fall into disrepair. And one-time budget Hail Mary’s, like Chicago selling its parking structures and meters in order to balance the budget for one year, strip citizens of future revenues while they watch parking (and other) service costs skyrocket;
• and Chicago has suffered the lowest real estate recovery rate of the top 30 major U.S. cities –not even returning to prices in 2008.

Growth solves a multitude of sins.

On the other hand, shrinking can become like the whirlpool over a drain. As the problems increase more people decide to leave, making the problems worsen. As more people go, there are fewer people left behind to make things better. Jobs go away, wages fall, demand drops, real estate prices drop, infrastructure projects stop, services stop and yet taxes have to be raised on the fewer remaining residents.

Few trends are more important for planning than understanding demographics. Demographics affect demand for everything, and planning for changes offers businesses the opportunity to be in the right place, at the right time, to be more successful. And, demographic trends are some of the easiest to predict:

Plans should be based on trends, not history. Understanding trends, and their trajectory, can help you be in the right market, at the right time, with the right product in order to succeed. There are lots of trends, but one that is fairly obvious, and incredibly important, is simply understanding demographics. Is this built into your planning system?