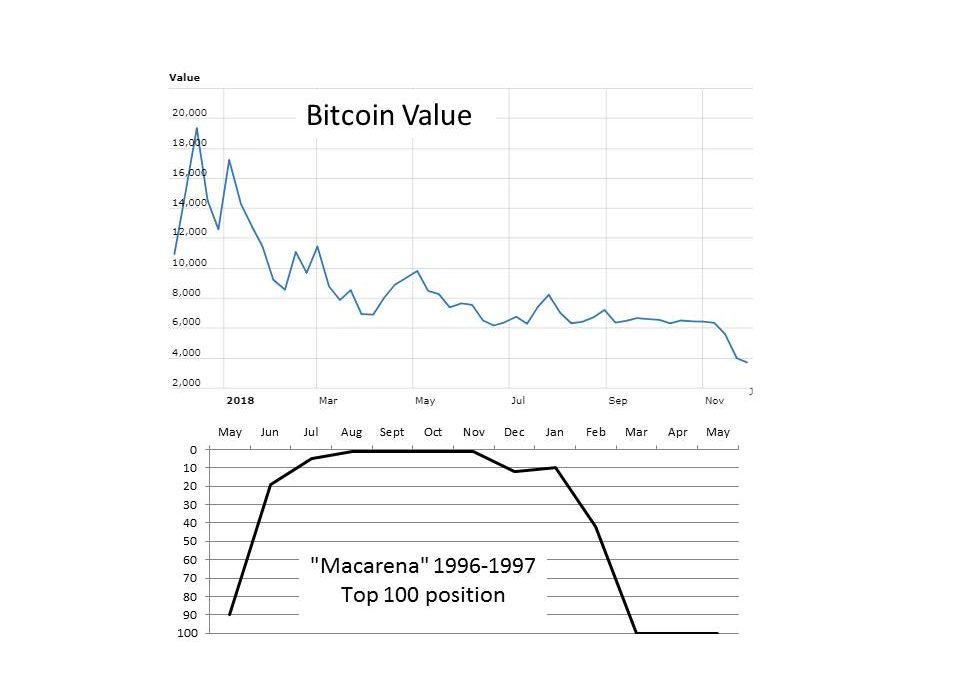 It was August 15, 2017 when I wrote the column “A Bitcoin Is Worth $4,000 – Why You Probably Should Not Own One.” At the time Bitcoin’s value had increased in value by 750% in just one year, and some investors were becoming very excited about Bitcoins. Journal articles were nearly all bullish, with some big Bitcoin owners projecting they would increase in value to over $250,000 each – or possibly into the millions!

But I was far more pragmatic. I pointed out that Bitcoins had no inherent value – unlike a Picasso painting, for example. There will be no more original Picasso’s, and no more signed Picasso prints. The supply is completely known, and the price is determined by what people will pay for the artistic history of them. But anybody can make a Bitcoin. And even though there was some theoretical limit of 21 million, why anybody would want to own these non-physical data bits was unclear. Were people going to say “come, look at this hard drive. It contains 400,000 Bitcoins. Isn’t it cool?” Bitcoins were a lot more like Pokemon cards. There are a LOT of them, more coming all the time, and their value was only to people who wanted to play the Bitcoin game.

And I had a very low opinion of the necessity of Bitcoins as a currency. Everyone is pretty happy to use dollars, yen, euros, etc. And if you fear inflation there is an open market to exchange any currency for any other, so you can quickly keep your savings in the currency of your choice. The only valuable use of Bitcoins was as a currency for illegal activity you don’t want traced – such as sex trafficking, drug trafficking or gun running. While the outlaws in those occupations my enjoy a non-government currency, those folks are relatively few and far between, and the need for such currency is therefore pretty weak. Not to mention illegal.

It was pretty clear that Bitcoin was a fad. Like the famous Dutch Tulip Bulb fad that drove the price of a Tulip bulb higher than a house. While a fad the value went up, but because there was no inherent value to the bulb greater than a flower, it’s value was sure to collapse. And the same would happen to Bitcoins. To a long-term trend watcher, and person skilled at understanding trends for planning, Bitcoin had all the signs of a fad.

I remember this well because when I published this column in Forbes there was a Bitcoin editor that went ballistic. This person had no background in economics, banking, currency, stock markets, or art; the editor was a journalist who had decided Bitcoin was “the next big thing.” Bitcoin was going to overtake traditional currencies, and save the world from central banks dead-set on destroying free trade and economic growth.

Honestly, I never understood the argument. Baseless, and senseless. Bitcoin was a fad, I said clearly, and no investor should be buying them – especially small investors. And it was a fools folly to spend money becoming a Bitcoin miner. Simply invest somewhere else where trends supported growth.

But the editorial staff at Forbes landed on me like a herd of elephants coming down the Himalayas. Apparently Forbes was buying into the Bitcoin craze, and they didn’t want anyone writing bad things about Bitcoin. I pointed out that in 9 years my predictions about the future of Netflix, Amazon, Tesla – and GE, Sears, and Windows 8 and 10 – had all turned out to be accurate.

I tended to be very early with my predictions, and quite contrarian, but within 2 years I was proven right. I knew the difference between a trend and a fad, and it was important to help readers understand the difference. Bitcoins had no inherent value, and they were/are not an investment vehicle.

In the end the rancor about my Bitcoin prediction, and my unwillingness to reverse my position, caused a break between myself and Forbes. Even as Bitcoins soared in value to $19,000 by December, 2017 I held firm to the position that no sound, long-term investor should touch them. If Forbes couldn’t understand my surety, then it was their problem.

This week Bitcoins traded for $4,400. Where they traded on August 20, 2017 just as my prediction went public. Bitcoins were/are a fad. Now, there are a slew of authors writing about the lack of any reason for Bitcoins to exist. Almost all are predicting the value will continue eroding, as more and more people see there was never any value in them to begin with. Many predict this will not end until Bitcoins are worth nothing, or possibly a few cents, and all the Bitcoin miners disappear.

The important lesson is that it is not impossible to know the difference between a trend and a fad. Trends are based upon behaviors that have a basis in gain. We trended away from physical stores and toward e-commerce because the latter was more convenient, and sometimes cheaper. We trended away from PC’s with hard drives and toward mobile devices connected to the cloud because they made our lives more convenient, and often cheaper. We are watching more entertainment via on-line downloads, and less on television, because it is more convenient, and often better. These are trends. They are observable, measurable and good trends generate a better outcome for people, while bad trends are due to consumer movement toward new solutions.

When you work a job all week trying to get more done better, faster, cheaper you may not have time to study trends. When you see something new it can seem hard to know whether it is a fad, or trend. Or if a trend, how fast it will “take hold” and alter behavior. That is understandable.

And that’s where people like me make a difference. I focus on trends. Demographics, regulations, technology – all kinds of trends. I watch them, measure them, and project outcomes for the trend, and those who adopt the trend. I build scenarios that stretch out the trend, and look for when more people are following a trend than doing things the “old way.” And because I do that all day, every day, for 20 years it is possible to forecast with high accuracy what the future will look like.

Almost always it takes a bit longer than I think, but likewise it almost always takes a lot less time than almost everyone else thinks. I didn’t think it would take 5 quarters for Bitcoins to peak and then fall back to $4,400. But most people were projecting the value of Bitcoins would go up for YEARS. They couldn’t visualize the peak. Even though it happened just 4 months after I said “don’t buy Bitcoins.” Only a very, very lucky trader would have bought in August, and sold in December. For true investors, this was a roller coaster ride with an unhappy ending.

I don’t meet many company executives that do future scenario planning. They are too busy running their business to do trend analysis, projections and make long-term forecasts. But that doesn’t mean these things aren’t important. It just means you need to look for outsiders, who specialize in trend analysis and long-term scenario planning, to help you guide your business in the right direction. Because you’d much rather be Microsoft, shifting from PC’s to cloud and holding onto your value, than GE or Sears. You need a partner to help you forecast – and grow.