March Jobs Report: 10 Impacts On You, Including Falling Unemployment And Rising Wages

The Labor Department March jobs report came out last week, and it disappointed a lot of people. At 98,000 new jobs, the number was about half what economists predicted. Simultaneously, the report revised January and February down a combined 38,000 jobs. Retail workers lost 30,000 jobs in March, which combined with February means 56,000 retailers lost jobs in just two months. There was ample disappointment to go around.

But, if we take a longer-term view the trend is much more pronounced, and we can easily see that overall the jobs market is very, very healthy – forcing employers to raise wages. 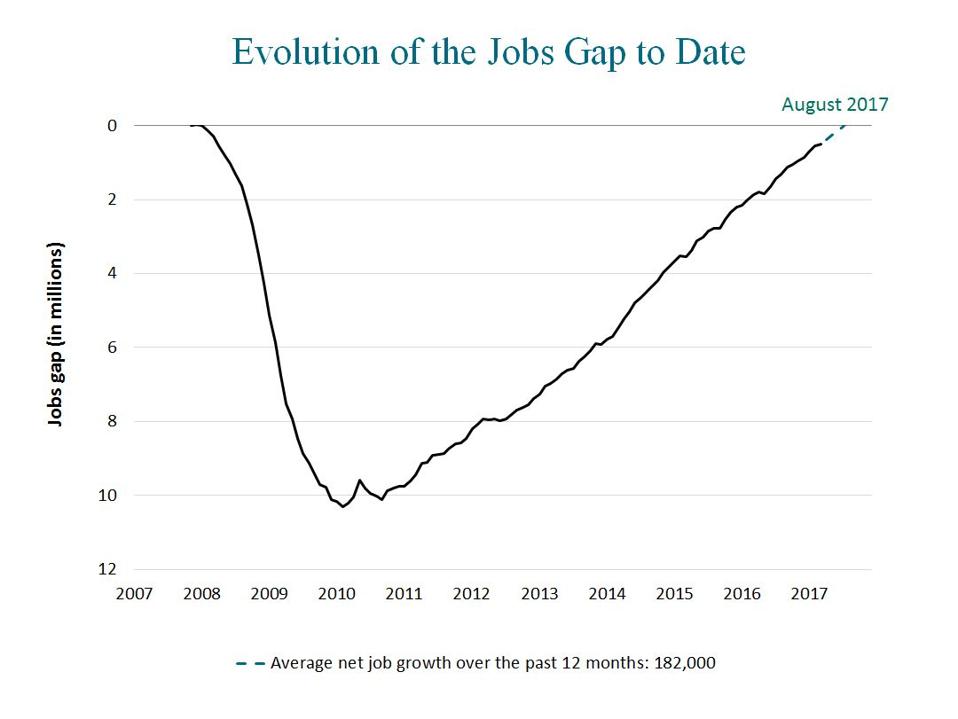 As the chart above indicates, America has recreated almost all the jobs lost in the Great Recession (chart courtesy of Kriston McIntosh of The Hamilton Project – Brookings). Almost 10 million jobs were lost between 2008 and 2010 as the financial crisis wiped out banks, and lending. That was a staggering decline of about 420,000 jobs per month.

Because businesses were loath to re-invest following the economic meltdown, the rate of job creation has been considerably slower than the speed with which executives laid off employees. However, since the end of 2011 the U.S. has been adding jobs at the rate of over 200,000 per month – a dramatic growth in job creation over an extraordinarily long-term period. Literally, unprecedented.

And, if we average the job creation rate the first three months of 2017 it comes to 178,000 per month. At this lower pace the jobs market will have fully recovered within the next four months (by August, 2017).  This jobs growth rate may be less than the last six years, but it is far more than is necessary to maintain employment rates – including population gains.

We see this very healthy improvement in the jobs situation in other statistics. Those in part-time positions seeking full-time positions fell to the lowest in several years at 8.9%. And, unemployment declined to 4.5% from 4.7% – a clear indication that there were more people finding work than losing work, pulling more people into the workforce for yet another month. At 4.5%, this is the lowest unemployment rate in a decade.

Net/net, America is rapidly approaching “full employment” – a term that means everyone who wants a job either has one, or is intentionally looking for a job and reasonably expects to find one in three months. Or, in other words, if you know somebody complaining they can’t find a job it is either because they aren’t really trying, or they are picky about what they want to do, or they can find a job but won’t take it because they want higher pay.

And hourly pay continues to rise, increasing 2.7% versus March, 2016. This is less than in good times, when pay tends to rise at 3-4%/year – but the fact that pay is going up means the labor market is tightening. And as the economy reaches higher levels of employment, and lower levels of unemployment, companies will have to pay more to find new workers – and increase wages on current workers to keep them from leaving. Thus, it is a surety that pay will rise throughout 2017, and probably into the foreseeable future.

Whether you liked President Obama or not, the policies of the last six years allowed America to escape the Great Recession. Today 78.5% of all working age people are in the workforce – that is the highest labor participation rate of working age people since 2008 – indicating a complete recovery from the job collapse.

Thus, it is time for changes in economic policy. To keep calling for job creation is, classically, “fighting the last war.” Even as government is reducing employment, and some industries (like traditional retail) are collapsing employment, there are other parts of the economy growing jobs. Amazon.com, for example, has announced it will be adding 100,000 U.S.  jobs by the middle of 2018.

It’s time to get over the constant complaining about a job shortage. And here’s what this means for you:

1. After a long decade of stagnation, we can expect everyone to receive higher pay.
2. Job mobility will improve.  If you don’t like your current job you can probably find another one.
3. Employers will have to stop burning out employees and do more to keep them as unemployment rates decline.
4. Immigration will be less of an issue, because America will need people to fill jobs (many employers are already complaining about changes to H1-B visa rules).
5. Employers will pay more for employee training and retraining.
6. People 30 and younger have struggled to build careers and start families during the recovery. Expect that situation to reverse.
7. More jobs, more money, a faster growing economy is better for tax receipts. This will relieve stress on government budgets.
8. Higher real estate prices. Some markets are already back to pre-recession levels, yet others have languished.  Expect across the board increases.
9. Interest rates will go up (from record lows). Lock-in your mortgage now. Adjust your portfolio from bonds to stocks.
10. Expect the dollar to remain strong, so imports will be cheap and exporting will continue to be more difficult. It’s a good time to visit foreign destinations, and it will be a struggle to attract international tourists.

Look beyond short-term numbers. Month-to-month, even quarter-to-quarter, numbers often yield little analytical value. Look at the long-term trend. Then make sure you, and your business, are ready. Don’t keep fighting the last war, prepare to capture the next opportunity.