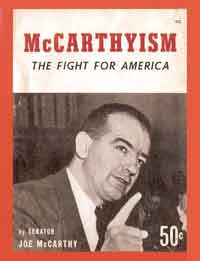 “Those who cannot remember the past are doomed to repeat it”

There seems to be nothing Donald Trump will not say.  Or at least imply.

Take for example his recent comment that evangelicals should not trust Ted Cruz because his father is from Cuba, and Cubans are mostly Catholic.  He didn’t say Mr. Cruz wasn’t an evangelical, he just inferred that Mr. Cruz must not be, due to his origins.  That Mr. Cruz’s father is a “born again Christian” and Bible-belt evangelical minister is simply ignored, regardless of its relevance.

Or, take for example the notion that Mr. Cruz is not eligible to be President because he was born in Canada, even though his mother is an American citizen.  Mr. Trump doesn’t say Mr. Cruz isn’t a natural born citizen, he just implies that possibly he is not and therefore he may not be a legitimate candidate.  Maybe Mr. Cruz really isn’t the American he claims to be?

Or, implying all Muslims are bad, because some followers of Islam have implemented bad acts. Mr. Trump has denounced all Muslims, and would deny all Muslims entry into the USA, because of the actions of a few.  After all, why not?  If you can’t tell the good from the bad, why not condemn them all?  If he were doing the same to Jewish believers we would call Mr. Trump’s language antisemitic.  Could you imagine denying all Jews entry into the USA – for any reason?

These are just a few of the outrageous things Mr. Trump has said, and yet he has people who think he is an admirable business leader suitable to be a political leader.  Recently a good friend of mine was quite eloquent in her praise for how well Mr. Trump “plays the media like a church organ.”  Even if she didn’t like some of his messages, she thought it admirable how he obtains media attention, and keeps it focused on himself, and lures people into listening to him.

Which takes me to my opening quote.  Mr. Trump is great at practicing McCarthyism – and yet nobody seems to care.  And if we don’t do something, we may repeat a part of history that was a very black eye.

Senator Joe McCarthy was a conservative Senator from Wisconsin in the early 1950s.  To achieve fame and glory, he famously developed a great skill for feeding the news media bits of information that would bring attention to himself.  Senator McCarthy excelled at building on the public’s FUD – Fears, Uncertainties and Doubts.

At the time, Americans were terribly afraid of communists, fearful they would ruin the U.S. social order and make the country into the next Soviet Union.  So Senator McCarthy conveniently blamed all social ills on communist infiltrators – people working in government jobs who were set on destroying the country.  He then would accuse those he didn’t like of being communists.  Or, if that accusation was proven baseless, he would accuse those he saw as political opponents of sympathizing with communists – claims that amounted to “you are guilty unless you can prove yourself innocent.”  He didn’t have to prove someone was bad, just that they might look bad, sound bad or know someone who was possibly bad.

Eventually, Senator McCarthy was exposed as the blowhard that he truly was.  Full of innuendo and attack, but lacking in any real policy skills or ability to govern.  The word “McCarthyism” was born to “describe reckless, unsubstantiated accusations, as well as demagogic attacks on the character or patriotism of political adversaries.” (Wikipedia)  Famous broadcaster Edward R. Murrow eventually exposed the baselessness of Senator McCarthy, leading to his Senatorial censure and media decline.

Few have ever demonstrated the skills of McCarthyism better than Mr. Trump.  Feeding the public FUD, Mr. Trump doesn’t say President Obama is a Muslim – but he accepts the notion from an audience member’s shout out at a public rally.  Just like McCarthy called members of the State Department “sympathizers” as he tried to ruin their careers, Mr. Trump says that the investigation of Benghazi implies that former Secretary of State Clinton did something wrong – even though the investigation results were that there was no wrong-doing by the Secretary or her staff.  The “investigation” is held out as evidence, when it is nothing more than an inference.  And attacks on whole groups of people, like Muslims, is the definition of demagoguery.

Mr. Trump may be good at media management, but that is not to be admired.  Being good at a skill is admirable only if that skill is used for good.  We admire magicians for slight-of-hand, but not pickpockets.  We admire forest rangers for skillful use of burns, but not arsonists.  We admire locksmiths for knowing how locks work, but not thieves.  We admire artists for great brushwork, but not forgers.  We admire hard working business people for their skills, but not skillful lawbreakers like Skillling of Enron, Ebbers of Worldcom or investment advisor Bernie Madoff.

Mr. Trump clearly knows how to identify the Fear, Uncertainty and Doubts that plague many Americans.  And he is quick with a phrase to make people even more fearful, uncertain and doubtful.  And he is well spoken enough to know how to obtain the attention of all media outlets, plus clever enough to know how to appeal to their need for quotes and images to meet the daily news cycle.  But, he does all of this as the heir apparent to demagogue Senator “Tailgunner Joe” McCarthy.

Mr. Trump is not a to be admired, he is not a leader, he is a demagogue.  And shame on us for letting him repeat a part history we surely regret.