General Electric’s Chairman and CEO Jeffrey Immelt announced last week that his next big step as leader will be to sell off the company’s real estate assets and the balance of its financial services business.  This is a massive $300B asset sale.  It follows the very large spin-off of GE’s retail banking unit as Synchrony Financial in 2014, and the sale of NBC/Universal in 2013.  When it comes to shrinking a company, few CEOs have ever been as successful as Mr. Immelt!

The money is not going into developing any new markets or new products.  It is not being used to finance growth of GE at all.  Rather, Mr. Immelt will immediately begin a massive $50B stock buyback program in order to prop up the stock price for investors. 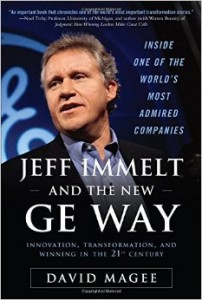 When Mr. Immelt took the job of CEO GE sold for about $40/share.  Last week it was trading for about $25/share.  A decline of 37.5%.  During that same time period the Dow Jones Industrial Average, of which GE is the oldest component, rose from 9,600 to 17,900.  An increase of 86.5%.  This has been a very, very long period of quite unsatisfactory performance for Mr. Immelt.

Prior to Mr. Immelt GE was headed by Jack Welch.  During his tenure at the top of GE the company created more wealth for its investors than any company ever in the recorded history of U.S. publicly traded companies.  GE’s value increased 40-fold (4000%) from 1981 to 2001. He expanded GE into new businesses, often far removed from its industrial manufacturing roots, as market shifts created new opportunities for growing revenues and profits.  From what was mostly a diversified manufacturing company Mr. Welch lead GE into real estate as those assets increased in value, then media as advertising revenues skyrocketed and finally financial services as deregulation opened the market for the greatest returns in banking history.

Jack Welch was the Steve Jobs of his era.  Because he had the foresight to push GE into new markets, create new products and grow the company.  Growth that was so substantial it kept GE constantly in the news, and investors thrilled.

But Mr. Immelt – not so much.  During his tenure GE has not developed any new markets.  He has not led the company into any growth areas.  As the world of portable technology has exploded, making a fortune for Apple and Google investors, GE missed the entire movement into the Internet of Things.  Rather than develop new products building on new technologies in wifi, portability, mobility and social Mr. Immelt’s GE sold the appliance division to Electrolux and spent the $3.3B on stock buybacks.

Mr. Immelt’s tenure has been lacked by a complete lack of vision. Rather than looking ahead and preparing for market shifts, Immelt’s GE has reacted to market changes – usually for the poorer.  Unprepared for things going off-kilter in financial services, the company was rocked by the financial meltdown and was only saved by an infusion from Berkshire Hathaway.  Now it is exiting the business which generates nearly half its profits, claiming it doesn’t want to deal with regulations, rather than figuring out how to make it a more successful enterprise.  After accumulating massive real estate holdings, instead of selling them at the peak in the mid-2000s it is now exiting as fast as possible in a recovering economy – to let the fund managers capture gains from improving real estate.

GE is now repatriating some $36B in foreign profits, on which it will pay $6B in taxes.  Investors should realize this is happening at the strongest value of the dollar since Mr. Immelt took office.  If GE needed these funds, which have been in offshore currencies such as the Euro, it could have repatriated them anytime in the last 3 years and those funds would have been $50B instead of $36B!  To say the timing of this transaction could not have been poorer ….

The only thing into which Mr. Immelt has invested has been GE stock.  And even that has been a lousy spend, as the price has gone down rather than up!   Smart investors have realized that there is no growth in Immelt’s GE, and they have dumped the stock faster than he could buy it.  Mr. Immelt’s Harvard MBA gave him insight to financial engineering, but unfortunately not how to lead and grow a major corporation.  After 15 years Immelt will leave GE a much smaller, and as he said in the press release, “simpler” business.  Apparently it was too big and complicated for him to run.

In the GE statement Mr. Immelt states “This is a major step in our strategy to focus GE around its competitive advantage.”  Sorry Mr. Immelt, but that is not a strategy.  Identifying growing markets and technologies to create strong, high profit positions with long-term returns is a strategy.  Using vague MBA-esque language to hide what is an obvious effort at salvaging a collapsing stock price for another 2 years has nothing to do with strategy.  It is a financial tactic.

The Immelt era is the story of a GE which has reacted to events, rather than lead them.  Where Steve Jobs took a broken, floundering company and used vision to guide it to great wealth, and Jack Welch used vision to build one of the world’s most resilient and strong corporations, Jeffrey Immelt and his team were overtaken by events at almost every turn.  CEO Immelt took what was perhaps the leading corporation of the last century and will leave it in dire shape, lacking a plan for re-establishing its once great heritage.  It is a story of utterly failed leadership.