Tuesday American celebrates Independence Day, and the decision to break away as a colony from England.  Since then America has been on quite a growth journey, and today most Americans cannot imagine a world where the USA is not the dominant power.  They were born post World War II and simply believe that America was once the great world power, and always will be.  Like it is some God-given immutable right. 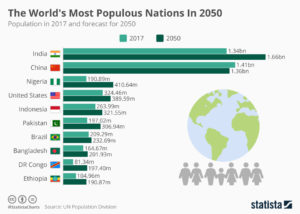 From the early 1800s well into the middle 1900s America had one of the fastest population growth rates in the world.  “Bring us your tired, your poor, your huddled masses yearning to breathe free” is on the Statue of Liberty for no small reason – America accepted floods of immigrants from around the world as westward expansion and the industrial age created huge opportunity for everyone.  People flooded America, and many people had very large families.  Well into the 1900s it was not uncommon for people to have 6, 8 or 10 siblings.

When the boomers were born America was rich in natural resources, had a growing economy, and had avoided the devastation that was left behind in Japan, Europe parts of southeast Asia and north Africa.  India was an emerging country, finding its way after refuting colonialism.  And China was off the world stage due to the inwardly focused leadership.  So Americans  have lived a very long time thinking that the world will always be a Christian, capitalist, democratic place where the USA’s domination could not be challenged.

But many things have changed dramatically, and many more changes are coming soon enough.  In a few short years population growth will make America a relatively far smaller country.  And both technology skill development and understanding how to use capitalism have unleashed dramatic growth in what were formerly derisively referred to as “emerging” countries.  “Emerging” implying that America had nothing to concern itself as regards these countries.

Zulu were some of the most feared warriors in Africa.  But, they had a practice of being inwardly focused.  As they looked inward they did not fear external enemies, but only those who came into their inner circle.  Approaching their internal circle could invite attack, and demolition.  But, eventually the external enemies became too many, and too far reaching, and the inwardly focused Zulu were attacked on multiple fronts from a growing host of enemies.  The Zulu lost their domination as Africa’s military leaders.

Americans must address their inclination for inwardly focusing on “what’s good for America.” It is naively affixing self-blinders to think policy decisions can be made independently of the world community, and without harmful retribution.  There are a lot more “of them” than their are “of us.”  And the majority of “them” have nuclear weapons just as powerful as “ours.”  And “their” economies are just as strong as “ours.”  In many cases actually a lot stronger. These countries can stand on their own without U.S. support, and they can implement policies which can be very destructive to U.S. economic interests globally.  And they can form their own coalitions to avoid working with America.

As other countries grow, those that choose to ignore immigration and the global movement of people will be big losers.  Today Japan is struggling, losing economic power annually, because it refuses to endorse a robust immigration policy.  Unfortunately, the same thing cold happen to America as its population growth rate falls, and its economic growth falls with it.  Outlawing sanctuary cities that help immigrants merge into American society is a misbegotten policy based on false assumptions about America’s lack of need for immigrants to remain globally competitive.

If America chooses to start all-out trade wars to protect its economy, America could be isolated and likely lose more than it gains. Where once American resources and technology were essential, that is far less true today.  European countries have every bit the technology and investment skills of Americans, as do the Chinese and many other countries.  Just look at how many of your beloved products, such as mobile phones, computers, TVs, and game consoles, are not made in America at all.  There are ample trade opportunities between all countries to supply each other with goods and products, including commodities such as wheat, coal, oil, lumber and gold, that could bypass America entirely.

If America starts a shooting war it is far from clear that it will be as untouched as WWII.  And far from clear who will “win,” especially if nuclear war ensues.

And while it is tempting to think that God is on the side of Christians, ignoring the growth of Islam is as foolish as the Romans attempting to ignore the growth of Christianity.  Thinking that the growth of Islam is a “Middle Eastern problem” is a dramatic understatement of the situation.  Population growth rates of Muslims are far greater globally than other religions.  It is ridiculous to think that Islam will not be a major part of the world religious landscape.  Thinking that Islam is a problem is hyperbole.  Thinking America can isolate itself from Islam is simply an hallucination.

Demographic trends are powerful forecasters.  They are very easy to predict, and almost always correct.  And they foretell a lot about how we will live and work in the future.  The key to good policy making is understanding these trends and working to take advantage of them for growth.  Ignoring them is a perilous journey that always ends very badly.  Since many of the trends are obvious, isn’t it time to plan for them effectively?