I’m a believer in Disruptive Innovation.  For almost 100 years economists have been writing about “Creative Destruction,” in which new technologies come along making old technologies — and the companies built on them — obsolete.  In the last 20 years, largely thanks to the initial insights of the faculty at Harvard Business School, we’ve seen a dramatic increase in understanding how new companies use new technologies to disrupt markets and wipe out the profitability of companies that were once clearly successful.  In a large way, we’ve come to accept that Disruptive Innovation is good, and the concomitant creative destruction of the old players leads to more rapid growth for the economy, increasing jobs and the wherewithal of everyone.

But, not really everyone.  The trickle to lots of people can be a long time coming.  When market shifts happen, and people lose jobs to new competitors — domestic or offshore — they only know that their life, at least short term, is a lot worse.  As they struggle to pay a mortgage, and find a new job, they often learn their skills are outdated.  There are jobs, but these folks are not qualified.  As they take lesser jobs, their incomes dwindle, and they may well lose their homes.  And their healthcare.

Economists call this workplace transition “temporary economic dislocation.”  Fancy term.  They claim that eventually folks do enter the workplace who are properly trained, and those folks make more money than the workers associated with the previous, now inferior, technology.

That’s great for economists.  But terrible for the folks who lost their jobs.  As someone once said “a recession is when your neighbor loses his job.  A depression is when you lose your job.”  And for a lot of people, the market shift from an industrial economy to an information economy has created severe economic depression in their lives.

A person learns to be a printer, or a printing plate maker, in the 1970s when they are 20-something.  Good job, makes a great wage.  Secure, as printing demand just keeps rising.  But then along comes the internet with PDF and JPEG documents that people read on a screen, and folks simply quit needing, or wanting, printed documents.  In 2016, now age 50-something, this printer or plate-maker no longer has a job.  Demand is down, and its really easy to send the printing to some offshore market like Thailand, Brazil or India where printing is cheaper.

What’s he or she to do now?  Go back to school you may say.  But to learn how to do what?  Say it’s on-line (or digital) document production.  OK, but since everyone in the 20s has been practicing this for over a decade it takes years to actually be competitive.  And then, what’s the pay for a starting digital graphic artist?  A lot less than what they made as a printer.  And who’s going to hire the 58-62 year old digital graphic artist, when there are millions of well trained 20 somethings who seem to be quicker, and more attuned to what the publishers want (especially when the boss ordering the work is 35-42, and really uncomfortable giving orders and feedback to someone her parents’ age.)  Oh, and when you look around there are millions of immigrants who are able to do the work, and willing to do it for a whole lot less than anyone native born to your country. 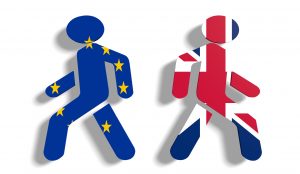 In England last week these disaffected people made it a point to show their country’s leadership that their livelihoods were being “creatively destroyed.”  How were they to keep up their standard of living with the flood of immigrants?  And with the wealth of the country constantly shifting from the middle class to the wealthy business leaders and bankers?  While folks who have done well the last 25 years voted overwhelmingly to remain in the EU (such as those who live in what’s called “The City”), those in the suburbs and outlying regions voted overwhelmingly to leave.  Sort of like their income gains, and jobs, left.

To paraphrase the famous line from the movie Network, “they were mad as Hell and they weren’t going to take it any longer.”  Simply put, if they couldn’t participate in the wonderful economic growth of EU participation, they would take it away from those who did.  The point wasn’t whether or not the currency might fall 10% or more, or whether stocks on the UK exchange would be routed.  After all, these folks largely don’t go to Europe or America, so they don’t care that much what the Euro or dollar costs.  And they don’t own stocks, because they aren’t rich enough to do so, so what does it hurt them if equities fall?  If this all puts a lot of pain on the wealthy – well just maybe that is what they really wanted.

America is seeing this in droves.  It’s called the Donald Trump for President campaign.  While unemployment is a remarkably low 5%, there are a lot of folks who are working for less money, or simply out of work entirely, because they don’t know how to get a job.  They may laugh at Robert DiNero as a retired businessman now working for free in “The Intern.”  But they really don’t think it’s funny.  They can’t afford to work for free.  They need more income to pay higher property taxes, sales taxes, health care and the costs of just about everything else.  And mostly they know they are rapidly being priced out of their lifestyle, and their homes, and figuring they’ll be working well into their 70s just to keep from falling into poverty.

These people hate President Obama.  They don’t care if the stock market has soared during his Presidency – they don’t own stocks (and if they do in a 401K or similar program they don’t care because it does them no good today.) They don’t care that he’s created more jobs than anyone since Reagan or Roosevelt, because they see their jobs gone, and they blame him if their recent college graduate doesn’t have a well-paying job.  They don’t care if we are closing in on universal health care, because all they see is that health care is becoming ever more expensive – and often beyond their ability to pay.  For them, their personal America is not as good as they expected it to be – and they are very, very angry.  And the President is a very identifiable symbol they can blame.

Creative Destruction, and disruptive innovations, are great for the winners.  But they can be wildly painful to the losers.  And when the disruptions are as big, and frequent, as what’s happened the last 30 years – globalized economy, nationwide and international super banks, outsourcing, offshoring and the entirety of the Internet of Things – it has left a lot of people really concerned about their future.  As they see the top 1% live opulent lifestyles, they struggle to keep a 12 year old car running and pay the higher license plate fees.  They really don’t care if the economy is growing, or the dollar is strong, or if unemployment is at near-record lows.  They know they are on the losing end of the stick.  For them, well, America really isn’t all that great anymore.

So, hungry for revenge, they are happy to kill the goose for dinner that laid the golden eggs.  They will take what they can, right now, and they don’t care if the costs are astronomical.

Despite their hard times, does this not sound at the least petty, and short-sighted?  Doesn’t it seem rather selfish to damn everyone just because your situation isn’t so good?

Some folks will think that government policy really doesn’t matter that much.  That actions like Brexit won’t stop they improvements coming from innovation.  They think all will work out OK.  They so long for a return to a previous time, when they perceived things were much better, that they are ready to stop the merry-go-round for everyone.

And they can do this.  Brexit will create a Depression for the UK.  The economy not only won’t grow, it will shrink.  Probably for another decade.  There will be fewer jobs, meaning less wealth for everyone.  Those with assets will ride it out.  Those who already struggled will struggle more.  Lacking investment funds, private and public, there will be less investment in infratructure and the means of production, making life harder for everyone.  There will be less, if any, money to invest in innovation, so there will be fewer new products to enjoy, and fewer improvements in lifestyle and productivity.  The currency will be lower, so there will be fewer imports, making the cost of everything go up.  In short, it will be very, painful, and costly, for everyone now that those who felt left out of the economic expansion have had their day at the polls.

Growth is a great thing.  Growth creates jobs, a better lifestyle, higher productivity, more income and more wealth for everyone.  But growth is NOT a given.  Policies, and government actions, can stop growth dead in its tracks.  The innovations we’ve all been fascinated by, and made part of our everyday lives, from smartphones to autos that last hundreds of thousands of miles and tens of years,  to low cost air conditioning, to electricity nearly everywhere, to miracle drugs and gene-based bio-pharmaceuticals that have extended our lives by 30%+ in just one generation — all of these things can come to a screeching, terrible halt.

All it takes to stop the gains of innovation are policies that try to return us to a previous time.  In the process of making our countries great again, we can absolutely destroy them.  It is impossible to go back in time.  It is not impossible to kill the means of economic growth.  All we have to do is focus on constructing walls instead of creating jobs, protecting industries instead of free trade, and wrapping ourselves in the flag of sovereignty instead of collaborating globally to maximize growth.  By focusing on ourselves we can absolutely hurt a lot of other people.

The politicians getting attention now are those espousing a return to some bygone era.  Those who denounce the gains of innovation, and offer pity to those who’ve struggled with market disruptions.  But these are not the leaders who will help people improve their lives.  Those who focus on promoting innovation, attacking the concentration of wealth at the top, providing more incentives to infrastructure development, and mobilizing resources for training and new job creation can make life better for everyone.

Let’s hope everyone watches what happens in the UK last week, this week and going forward learn the long-term lesson of short-term thinking.  Let’s hope that we can return to favoring growth, even a the cost of disruption and creative destruction.