As Immelt Leaves GE, Investors And Employees Have Little To Cheer 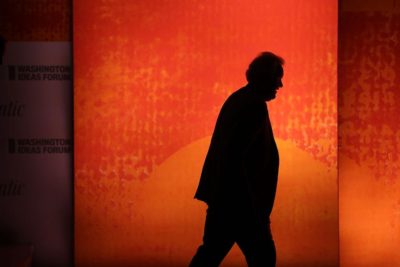 GE Chairman and CEO Jeff Immelt walks off stage after being interviewed during the Washington Ideas Forum at the Harmon Center for the Arts September 28, 2016 in Washington, DC. A proud Republican, Immelt said it would hurt the United States and cripple President Barack Obama — and the next president of the U.S. — not to agree to trade deals like theTrans Pacific Partnership (Photo by Chip Somodevilla/Getty Images)

Readers of this column know I’m not a fan of General Electric’s CEO, Jeffrey Immelt.  In May, 2012 I listed CEO Immelt as the 4th worst CEO of a large publicly traded American company.  Unfortunately, his continued tenure since then did nothing to help make GE a stronger, or more valuable company.  GE’s lead director says this is the culmination of a transition plan first developed in 2011.  One can only wonder why it took the board so incredibly long to replace the feckless CEO, and why they allowed GE’s leadership to continue destroying shareholder value.

The longer back you look, the worse Immelt’s performance appears.

Few company analysts can say they’ve followed a company for 3 years. Fewer yet can say 5 years.  Nearly none can say a decade.  Yet, CEO Immelt was in his job for 16 years – much longer than almost all business analysts or writers have followed GE.  Therefore, their lack of long-term memory often leaves them unable to give a proper overview of the company’s fortunes under the long-lived CEO.

I have followed GE closely for almost 35 years.  Ever since I graduated from HBS class of 1982 along with Mr. Immelt. Several fellow alumni worked at GE, and a large number of my BCG (Boston Consulting Group) colleagues joined GE in senior positions during the mid-1980s as GE grew exponentially. I have followed several of these alumni as the years passed allowing me to take the “long view” on GE’s performance, during Welch’s leadership and more recently since Mr. Immelt took the top job.

I was very pleased to include a positive case study of GE’s business practices in my book “Create Marketplace Distruption – How to Stay Ahead of the Competition” (Financial Times Press, 2007.)  CEO Welch used a number of internal processes to help GE leaders identify disruptive opportunities to change industries – whether markets where GE already competed or new markets.  He relentlessly encouraged entering new businesses where GE could bring something new to the game, and he put GE’s money to good use growing revenues, and market cap, enormously.  No other CEO in American history made as much value for shareholders as Jack Welch.  His leadership pushed GE to the top position in most industries, and his relentless focus on growth helped even rank-and-file employees build million dollar IRAs to go with well funded pension and retiree benefit plans.

GE’s performance could not have changed more dramatically than it has under Mr. Immelt. But there are now a number of apologists who would say GE’s smaller size, and lower valuation, are due to market conditions which were out of Mr. Immelt’s control.  They contend CEO Immelt was a good steward of the company during difficult market conditions, and the results of his tenure – notably lower revenues, lower valuation, fewer markets, fewer employees and lower community involvement – are not his fault.  They argue he did a good job, all things considered.

Balderdash. Immelt was a terrible CEO

There is an overall reluctance to say bad things about any huge American icon, and its CEO. After all, columnists and analysts who are non-congratulatory don’t usually get called by the company to be consultants, or advisors.  Or to be on the board.  And publishers of columnists who say negative things about big companies and their execs risk having ad dollars moved to more favorable journals, and often unfriendly relationships with their ad departments and agencies.  So it is far easier, and more acceptable, to sugar coat bad strategy, bad leadership and bad results.

But we should move beyond that bias. Mr. Immelt was the CEO of the ONLY company on the Dow Jones Industrial Average (DJIA) to have been on that list since it was created.  He inherited the most successful company at creating shareholder value during the 1980s and 1990s.  He surely should be held to the highest of comparative bars.

Those who say CEO Immelt was “set up to fail” are somehow making the case that Immelt would have been more successful if he had inherited a company with a bad brand image, weak history, and inadequate performance.  They are rewriting history to say Jack Welch was not a good CEO, and his outsized gains destined GE to do poorly under his successor.  That simply defies the facts – and logic.

Looking at the last 16 years of “difficult times,” when GE has struggled under Immelt’s leadership, one should ask “why did so many other companies do so well?”  After all, the DJIA has more than doubled.  The S&P 500 has almost doubled.  The Russell 2000 has almost tripled. Overall, far more companies have gone up in value than down.  Why were Immelt’s circumstances so difficult that all of those CEOs did so much better?  They dealt with the same financial meltdown, same Great Recession, same increase in regulations, same federal reserve, same government administration – yet they were able to adapt their companies, grow and increase value.

Yes, GE was huge in financial services when Immelt took the reigns, and financial services saw a major crash. But look at the performance of JPMorganChase under CEO Jamie Dimon (also a classmate of Mr. Immelt.)  JPM is stronger today than ever, growing and gaining market share and increasing its value to shareholders.  Prior to the crash, in spring 2007, GE was trading at $41/share, and now it is $29 – a decline of ~30%. Back then JPM was trading at $53, and now it is $93 – a gain of ~75%.  There obviously was a strategy to adapt to market conditions and do well.  Just not at GE.

Immelt reacted to market events, poorly, rather than having a prepared, proactive strategy

Let’s not rewrite history.  Prior to the banking crash CEO Immelt was more than happy for GE to be in the “easy money” world of finance.  Welch had created GE Capital, and Immelt had furthered its growth when lending was easy and profitable.  And he supported the enormous growth in GE’s real estate division.  When this industry faced the crash, GE faced a near-bankruptcy not because of Welch, but because of Immelt’s leadership during the over 6 years he had been CEO.  If there were risks in the system CEO Immelt had ample time to re-arrange the portfolio, reduce lending, offload financial assets and reduce exposure to real estate and mortgages.  But Immelt did not do those things.  He did not prepare for a reversal in the markets, and he did not prepare the balance sheet for a significant change of events.  It was his leadership that left GE exposed.

As GE shares fell to $7  Immelt made a famous deal with Berkshire Hathaway’s CEO Warren Buffet to increase GE’s capital base in order to stave off demise. And this deal saved GE.  But this was an extremely sweet deal for Buffett, giving Berkshire very good interest (10%) on the preferred shares and warrants allowing Buffett to buy future shares of GE at a fixed price.  Berkshire made a profit, over and above the interest, of $260M on the deal, and overall at least $1.2B.  By being prepared Buffett saved GE and made a lot of money. GE’s investors paid the price for a CEO that was unprepared.

But the changes brought about by the crash, and Dodd-Frank, were more than CEO Immelt could manage.  Thus GE exited the business selling many assets at fire sale prices.  This “turn tale and run” strategy was sold to the public as a way for GE to “focus” on its “core manufacturing business.”  Rather, it was a failure of leadership to understand how to manage this business to future success in changed markets.  Where Welch’s GE had grasped for disruption as opportunity, Immelt’s GE gasped at disruption and fled, destroying billions in GE value.

Immelt could not grow GE’s businesses, so he divested GE of many.

GE was to be the “industrial internet giant.”  GE was to be a leader in the internet-of-things (IoT) where sensors, the cloud and remote devices created greater productivity.  And, to be sure, companies like Apple,  Google and Samsung have made huge gains in this market.  Even small companies, like Nest, were able to jump on this technology shift with new products for the residential market.  But name one market where GE is the dominant IoT player.  During 16 years the internet and remote services markets have exploded, yet GE is not the market leader.  Rather it is barely recognized.

Rather than growing GE with disruptive innovations and visionary products in emerging technology markets, Immelt’s GE was primarily shrinking via divestitures. In dismantling GE Capital he eliminated the lending and real estate operations.  After decades as a leader in appliances, that division was sold. Welch built the extremely successful entertainment division around NBC/Universal, which Immelt sold. 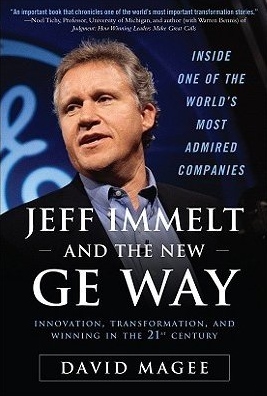 The water business that was to be a world leader under Immelt’s vision, likewise sold – and largely to make sure GE could close the deal on selling its oil & gas unit.  Even the famed electrical distribution business, going back to the start of GE, is now close to being sold.

And what happened to all this money?  Well, about $50B went into share buybacks – which ostensibly would help shareholders.  Only it didn’t, because GE is still worth less than when buybacks started. So the money just disappeared.  At least Immelt could have paid it to shareholders as a dividend – but then that would not have boosted his bonuses.

GE’s website says Mr. Immelt wanted to create a “simpler, more valuable industrial company.”  Mr. Immelt is definitely leaving behind a simpler, much smaller and weaker company.  The brand is gone from consumer products, and severely tarnished in commercial products.  GE lacks a great product pipeline, and even a strong development pipeline due to the rampant divestitures.  When Mr. Flannery takes over as CEO he will not inherit a powerhouse company.  He will inherit a company that is shrinking and rudderless, and disconnected from most growth markets with almost no product, technology or brand advantages.  And he will report to the Chairman that created this mess, Mr. Immelt.

The most likely outcome is that Mr. Peltz and his firm, Trian Partners, will buy more GE shares and seek directorships on the board.  Then, in a move not unlike the deaths of DuPont and Dow, there will be a massive cost cutting effort to bring expenses in-line with the shrunken GE business.  R&D will be discontinued, as will product development.  Support groups will be shredded.  Customer service will be downsized.  Then the remaining pieces will be sold off to buyers, or taken public, leaving GE a dismantled piece of history.

While that may work for the capital markets, and some short-term investors will share in the higher valuation, what about the people?  People who dedicated their careers to GE, and are pensioners or current employees?  What about cities and counties where GE has been a major employer, and civic contributor?  What about customers that bought GE industrial products, only to see those products dropped due to low profitability, or little growth opportunity?  What about suppliers that invested in developing new technologies or products for GE to take to market?  What will happen to the people who once relied on GE as America’s largest diversified industrial company?

These people all have an ax to grind with the very wealthy, and now departing, CEO Immelt.  He inherited what may well have been the most successful company on earth.  He leaves behind a far weaker company that may not survive.