Apple’s Installed Base – Foundation for Success, or Curse? 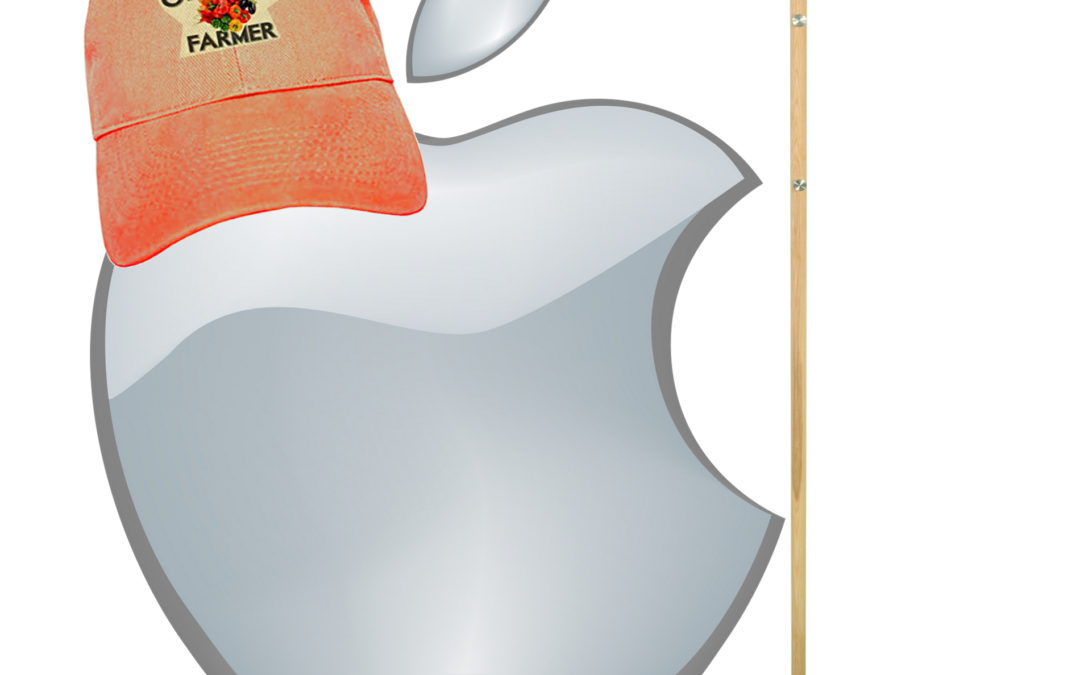 The last few quarters sales growth has not been as good for Apple as it once was. The iPhone X didn’t sell as fast as they hoped, and while the Apple Watch outsells the entire Swiss watch industry it does not generate the volumes of an iPhone. And other new products like Apple Pay and iBeacon just have not taken off.

Amidst this slowness, the big winner has been “Apple Services” revenue. This is largely sales of music, videos and apps from iTunes and the App store. In Q2, 2018 revenues reached $9.2B, 15% of total revenues and second only to iPhone sales. Although Apple does not have a majority of smartphone users, the user base it has spends a lot of money on things for Apple devices. A lot of money. 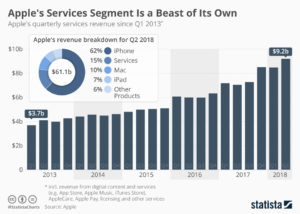 In a bit of “get them the razor so they will buy the razor blades” CEO Tim Cook’s Apple is increasingly relying upon farming the “installed base” of users to drive additional revenues. Leveraging the “installed base” of users is now THE primary theme for growing Apple sales. And even old-tech guys like Warren Buffett at Berkshire Hathaway love it, as they gobble up Apple shares. As do many analysts, and investors. Apple has paid out over $100B to developers for its services, and generated over $40B in revenues for itself – and with such a large base willing to buy things developers are likely to keep providing more products and working to grow sales.

But the risks here should not be taken lightly. At one time Apple’s Macintosh was the #1 selling PC. But it was “closed” and required users buy their applications from Apple. Microsoft offered its “open architecture” and suddenly lots of new applications were available for PCs, which were also cheaper than Macs. Over a few years that “installed base” strategy backfired for Apple as PC sales exploded and Mac sales shrank until it became a niche product with under 10% market share.

Today, Android phones are the #1 smartphone market share platform, and Android devices (like the PC) are much cheaper. Even cheaper are Chinese made products. Although there are problems, the risk exists that someday apps, etc for Android and/or other platforms could become more standard and the larger Android base could “flip” the market.

The history of companies relying on an installed base to grow their company has not gone well. Going back 30 years, AM Multigraphics an ABDick sold small printing presses to schools, government agencies and businesses. After the equipment sale these companies made most of their growth on the printing supplies these presses used. But competitors whacked away at those sales, and eventually new technologies displaced the small presses. The installed base shrank, and both companies disappeared.

Xerox would literally give companies a copier if they would just pay a “per click” charge for service on the machine, and use Xerox toner. Xerox grew like the proverbial weed. Their service and toner revenue built the company. But then people started using much cheaper copiers they could buy, and supply with cheaper consumables. And desktop publishing solutions caused copier use to decline. So much for Xerox growth – and the company rapidly lost relevance. Now Xerox is on the verge of disappearing into Fuji.

HP loved to sell customers cheap ink-jet printer so they bought the ink. But now images are mostly transferred as .jpg, .png or .pdf files and not printed at all. The installed base of HP printers drove growth, until the need for any printing started disappearing.

The point? It is very risky to rely on your installed platform base for your growth. Why? Because competitors with cheaper platforms can come along and offer cheaper consumables, making your expensive platform hard to keep forefront in the market. That’s the classic “innovator’s dilemma” – someone comes along with a less-good solution but it’s cheaper and people say “that’s good enough” thus switching to the cheaper platform. This leaves the innovator stuck trying to defend their expensive platform and aftermarket sales as the market switches to ever better, cheaper solutions.

It’s great that Apple is milking its installed base. That’s smart. But it is not a viable long-term strategy. That base will, someday, be overtaken by a competitor or a new technology. Like, maybe, smart speakers. They are becoming ubiquitous. Yes, today Siri is the #1 voice assistant. But as Echo and Google speaker sales proliferate, can they do to smartphones what smartphones did to PCs? What if one of these companies cooperates with Microsoft to incorporate Cortana, and link everything on the network into the Windows infrastructure? If these scenarios prevail, Apple could/will be in big trouble.

I pointed out in October, 2016 that Apple hit a Growth Stall. When that happens, maintaining 2% growth long-term happens only 7% of the time. I warned investors to be wary of Apple. Why? Because a Growth Stall is an early indicator of an innovation gap developing between the company’s products and emerging products. In this case, it could be a gap between ever enhanced (beyond user needs) mobile devices and really cheap voice activated assistant devices in homes, cars, offices, everywhere. Apple can milk that installed base for a goodly while, but eventually it needs “the next big thing” if it is going to continue being a long-term winner.