The No. 1 Lesson From Hurricane Matthew And Brexit: Scenario Planning Is Crucial

As I write this in 2016, Hurricane Matthew is crashing into Daytona Beach. It is a monster storm, and far from over. But there already is a great lesson we can learn.

Shockingly, after passing nearly half of Florida, including densely populated areas like Miami, Fort Lauderdale and Palm Beach, only one person has died. Even as northeastern Florida awaits Matthew’s fury, damage assessments are underway in south Florida. Even though 600,000 homes are without power, utility companies are already restoring power to over 50,000 homes, and that number is growing. The Florida highway system is open, with all roads passable and people are able to reach safety, while realistically expecting they may soon be able to return to their homes. By all accounts, damage is considerable. Yet, few lives were lost and repair is already underway – long before the storm is ending.

The lesson here is that scenario planning is incredibly valuable. Florida’s leaders have been preparing for this storm for years. The many agencies, federal, state, county and municipal, built their scenarios, and prepared action plans. They talked about “what if” various things happened, and thought through the impacts – and actions they would take.

The result is a remarkable demonstration of capability and leadership. Even as the storm progresses, continuing to put more people in harm’s way, the leaders are simultaneously helping those folks prepare and beginning the recovery for those dealing with Matthew’s aftermath.

Then, there’s Brexit. The British currency has fallen to 30-plus year lows. This morning a “flash crash” happened with the currency falling 10% in minutes. Even though the pound recovered much of that loss, the crash left traders and those who do international business shaken. This was just the latest reaction to the British vote to exit the EU.

This week people in all parts of the international business community were trying to figure out how to react to Prime Minister May’s speech saying Britain would seek a “hard exit.” This seems to imply a faster, more drastic break from Europe. But as David Buik, market commentator at Panmure Gordon & Co. said, “The media decided very quickly what interpretation to put on the term ‘hard Brexit,’ when most of us are none the wiser as to what Brexit means yet.”

The key word here is “reacting.” It is clear that almost nobody had any plans for undertaking Britain’s departure from the EU, even as the effort to create a vote, and implement a vote, occurred. While there was a lot of talk, nobody in government or business had a plan for what to do if the vote to leave actually passed. Now everyone is reacting, and the consequences are significant fear, uncertainty and doubt (FUD), and wild swings in everything from currency values to equity values and even real estate. 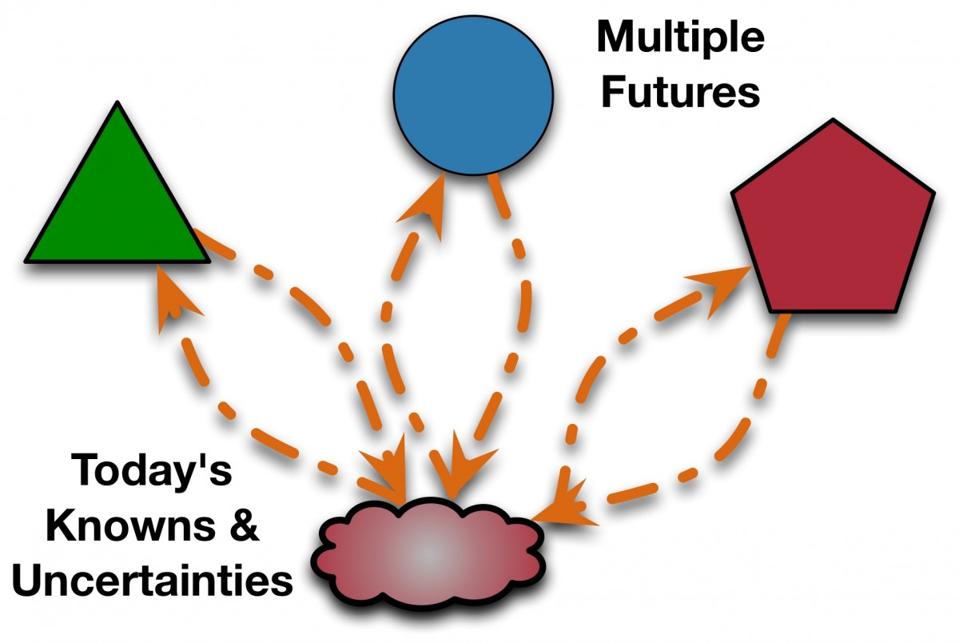 Proper scenario planning separates leaders from wanna-bes, and winners from losers. Those who consider what might happen, and prepare for events, inevitably do far, far better than those who react.  Lacking a preparedness plan, based on careful consideration of “what-ifs,” it is impossible to implement good decision-making, because you have no idea what markers, or metrics, to watch – and no idea of what actions to take as those metrics vary.

I observed a scenario-planning meeting where the head of planning was asking questions – “what-if…regulations go in this direction…technology accomplishes this level of performance…customer adoption of a substitute increase.” After a series of these propositions were discussed, the CEO said “This seems to be a waste of time. We don’t know what will happen. What if pigs could fly?” Given a lack of facts about the future, he proposed building a future plan based upon the market as it existed at the time, and reacting to changes only after they occurred.

The planning lead responded, “Whether or not pigs will fly has very little to do with the future performance of our company. And that is why we aren’t discussing flying pigs. These variables in the scenarios could have a major impact on future performance, and if we prepare for them we most likely will improve competitiveness, sales and profits.”

Scenario planning is not a wild exercise of imaginary happenings. Scenario planning uses known trends to identify key variables which can be measured. By looking forward on the trend, it is possible to predict possible outcomes – and prepare.

For example, famously, the leadership of Apple in 2000 looked at the trend toward high-speed internet implementation, including WiFi. They started tracking high-speed implementation, and realized that as bandwidth expanded and improved the desire to work on-line would grow as well. They began preparing products for much greater on-line use (iMac) and products based on widely available, low cost internet access. The result was a shift from near bankruptcy to the most valuable traded equity in America in just one decade.

Planning systems are biased toward using historical data, and do not consider big changes. Leadership must constantly fight the urge to assume the future will look like the past, and invest time building scenario plans. Building the skill to predict the future, using trends to build scenarios and plans, is a hallmark of the most successful companies.

Florida’s leaders could have assumed another big hurricane would not hit their state, and simply waited to react when it happened. By thinking through possible outcomes, they have shown an amazing level of preparedness. In contrast, Britain’s leaders did not think through the impact of a British exit, pushed for a vote prematurely, and now are lurching from point to point, reacting to events, unprepared for any outcome – and trying to create and implement a plan “on the fly.”

How prepared is your company? How often do you discuss future scenarios, and actually plan for them? Or do you plan based on history, hoping the future will look like the past? Are you going to use scenarios to be effective in future markets?

Or are you going to wait for events to unfold, react and hope you don’t drown?