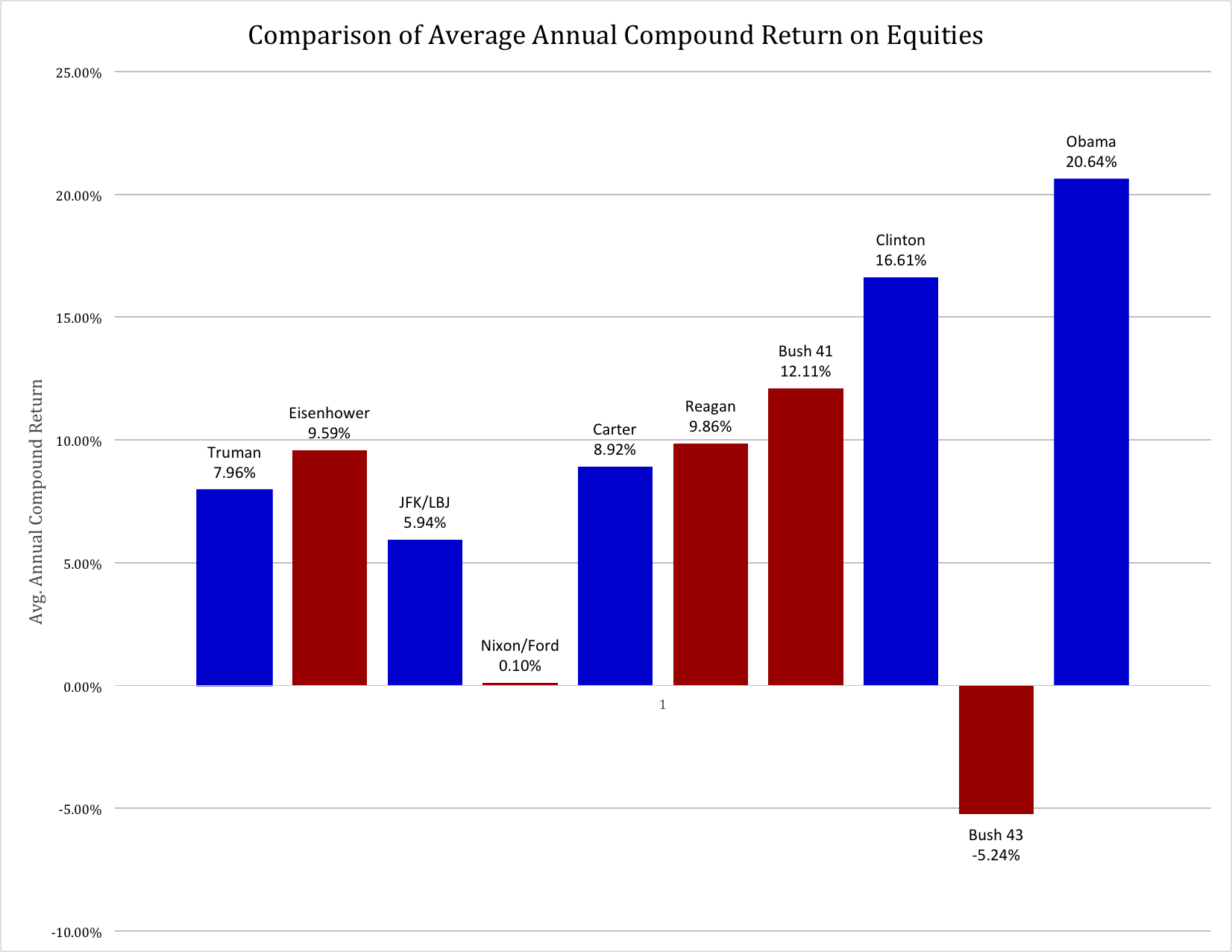 This week marks the 6th anniversary of the stock market’s bull run, with the S&P up 206%.  Only 3 other times since WWII have equities had such a prolonged, sustained growth series.  Simultaneously, last week saw yet another month with over 200,000 non-farm jobs created, making the current rate of jobs growth the best in 15 years.  And, in a move that has taken some by surprise, the U.S. dollar is hitting highs against foreign currencies that have not been seen in over 12 years.

It is a rare economic trifecta, and demonstrates America is doing better than all other developed countries.

It seemed an appropriate time to re-interview Bob Deitrick, Managing Director of Polaris Financial Partners, and author of “Bulls, Bears and the Ballot Box” to obtain his take on the economy.  Mr. Deitrick’s book reviewed America’s economic performance under each President since the creation of the Federal Reserve, and in direct opposition to conventional wisdom concluded presidents from the Democratic party were better economic stewards than Republican presidents.  When published in 2012 Mr. Deitrick predicted that the economy would continue to do well under President Obama, and so far he’s been proven correct. 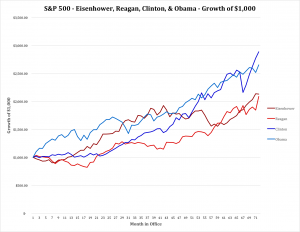 AH: Since we discussed “Obama’s Miracle Market” in January, 2014 stocks have continued to rise.  Has this bull run surprised you, and do you think it will continue?

Bob Deitrick: No it has not surprised us.  Looking across  history since Hoover, Democrats in the White House have generally presided over good stock market gains.  Since Clinton was elected, Democratic administrations have done remarkably well, with both Clinton and Obama outperforming the best Republican presidents which were Eisenhower and Reagan.

Looking at the S&P 500, Clinton and Obama have performed about the same with about a 17% annual rate of return through the first 62 months of office.  Which is 70% better than the approximate 10% return of Republicans. 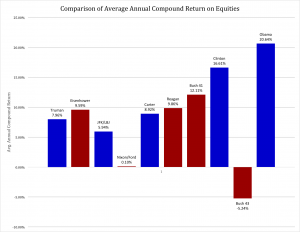 It is worth noting that when we take a broader gauge of equities (which we used in the book,) including the more volatile NASDAQ index and the highly selective Dow Jones Industrial Average, then the market’s performance during the Obama administration is unchallenged.  The last 6 years generated compound annual returns of 22.5% (including dividend reinvestment) which is the best improvement in equities of all time.

It is also worth noting that the collapse of equities has happened 3 times since 1900, and all under Republican administrations – Hoover, Nixon/Ford, Bush 43.  Even Carter had a rising equities market, and the Clinton + Obama years were unparalleled.

We agree with many other analysts that this bull market is not complete.  We think the stock markets are only at the half way point in a secular bull cycle which will last, in total, 8 to 12 years.

AH: It was 6 months ago when you pointed out that President Obama outperformed President Reagan on jobs growth.  At that time there were many, many naysayers.  Yet, August’s numbers were later revised upward to over 200,000 and every month since has continued with strong jobs growth – some nearly 300,000.  Are you surprised by the strength in jobs creation, and do you think it will stall?

Bob Deitrick: Both Reagan and Obama inherited a bad jobs marketplace.  Both of them saw unemployment spike into double digits early in their presidencies.  And both created jobs programs that brought down the percentage of people unemployed.  Obama had a lesser spike than Reagan, and during the last 5 years unemployment rate fell faster than it did under Reagan. 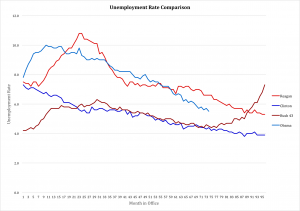 It is also worth noting that when comparing Obama and Reagan, Reagan undertook the largest increase in non-wartime deficit spending ever.  He essentially used a form of “New Deal” debt spending on infrastructure and defense to stimulate jobs production.  President Obama has been able to reduce the size of the annual deficit every year since taking office, in reality shrinking the amount of money spent by the government while simultaneously creating these new jobs.  The only other president to accomplish this feat was Clinton, who actually balanced the budget during his presidency.

We believe the economy is very strong, and along with other analysts think the jobs recovery will remain intact.  With less war spending, lower oil prices, more people covered by insurance, and higher minimum wages consumers will continue to spend and the economy will grow.  New technology products will bring more people into the workforce, and manufacturing will continue its renaissance.  We expect that unemployment will continue falling toward 4.4% by summer of 2016, returning the economy to non-wartime full employment.

AH: For years many talk show hosts and guests have been declaring that the Fed was flooding the markets with cash and setting the stage for rampant inflation which would ruin the dollar and the U.S. economy.  But in the last few months the dollar has rallied to rates we haven’t seen since the 1990s.  Did this surprise you, and do you think the dollar will remain strong?

Bob Deitrick: We were not surprised.  Ben Bernanke ranks right up there with the first ever Federal Reserve Chairman Marriner Eccles at knowing what to do to keep the American economy from collapsing in the wake of the country’s second depression.  Only by re-inflating the economy with more cash, and keeping interest rates low, did America avoid a horrible repeat of the 1930s. 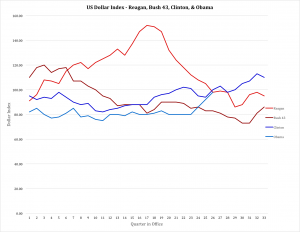 As a result of Democratic policies America re-invested in growth, which allowed companies to invest in plant and equipment and create new jobs, while lowering the deficit.  This happened simultaneously with opposite policies being implemented in Europe and Japan (so called “austerity”) which has caused their economies to weaken.  And slowed demand from Europe has reduced growth rates in China and India, all leading global investors to return to the U.S. dollar as a safe haven.  It is because of our economic strength that the dollar is returning to rates we have not seen since the Clinton presidency. 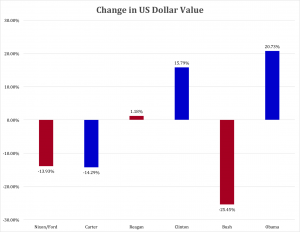 Many people recall the huge increase in the dollar’s value toward the middle of the Reagan presidency.  However, as the U.S. deficits, and total debt, skyrocketed the dollar plummeted.  By the time Reagan left office the dollar was worth almost the same as when he entered office.

And the combination of lower taxes plus costs for waging war in the middle east sent the U.S. debt exploding again under Bush 43.  What had been a balanced budget under Clinton, which had pushed the dollar almost back to post-war highs, was destroyed causing the dollar to plummet 25%.

The dollar is now up 21% against a basket of world currencies.  Given ongoing European weakness and the never-ending fight over austerity we see no reason to think the Euro will make a comeback any time soon. Rather, we predict the strong U.S. economy, especially with oil prices likely to remain low (and priced in dollars,) the U.S. dollar will continue to rally.  It could well go back to Clinton-era highs and possibly approach the values during Reagan’s presidency.  Should this happen it would be a record improvement in the dollar by any modern administration.

Bob Deitrick: I have voted for both Republicans and Democrats, and think of myself as a centrist.  Most people, by definition, are centrists.  I long believed that the GOP was the party which was best for the economy.  But I could tell something wasn’t adding up during the Bush 43 presidency, so I chose to research the performance of both parties.

The GOP has created an illusion that it is a better economic steward by promoting itself as the party with the better business acumen, frequently touting elected officials from business schools and with MBAs rather than law degrees.  The GOP, and the media leaders who identify with the GOP, tell Americans every chance they can that Republicans are the party of financial acuity and have the policies to create economic prowess.  Yet we found through our research that these claims were little more than myth.  In the modern era, post Great Depression and with a strong Federal Reserve in place, Democratic administrations have been far better stewards of the economy and caretakers of the government’s wallet.

We have coached investors to be in this equity market, and remain long, since early in the Obama administration.  We have continued to remain long, and coach investors that in our opinion this remains the best course.  We see the economy growing due to a balanced approach to jobs creation, spending and taxation. Were there less partisanship, such as occurred during the Reagan era when the Democrat party controlled the Congress while Republicans controlled the administration, it might be possible for the economy to grow even more quickly.