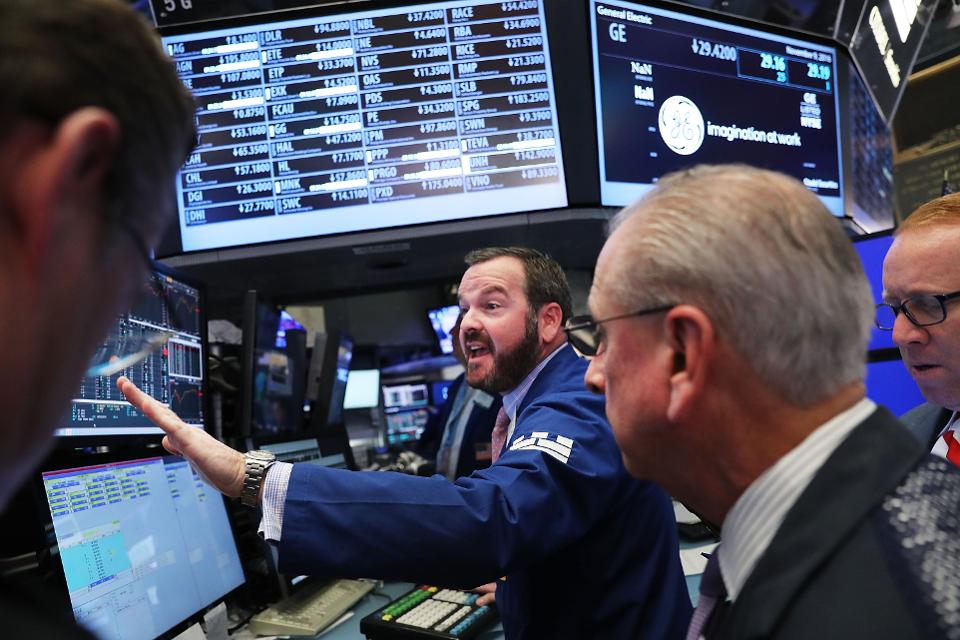 Traders work on the floor of the NYSE the morning after Donald Trump
won a major upset in the presidential election. (Photo by Spencer Platt/Getty Images)

Since election day there has been an enormous shift in the U.S. stock market. The Dow (Dow Jones Industrial Average – DJIA) has hit new highs. But simultaneously the NASDAQ 100 is falling. In short, most tech stocks have been creamed, while out-of-favor laggards have been bid up.

I 100% favor long-term investing. Anyone who tries to be a trader, or otherwise time the markets, is most likely going to get burned. If you want to share in the growth of America’s economy the best way is to buy stocks in good, growing companies and hold them a long time. As Warren Buffett said after the election, the American economy will be bigger, and stocks will be worth more, in 10, 20, 30 years regardless who is president.

Traders make decisions on the smallest bit of information. Often information that is nothing more than an unproven thought.  Looking into the future they try to have a crystal ball, but they rarely use trend information and often use guesses.

So, after the election, the trader theory goes that tech companies will be burned. Trump apparently doesn’t use a computer, so he doesn’t use the Internet. And he doesn’t actually tweet, or use social media, he just blurts things out and someone else enters the blurts. So his lack of interest in technology is bad for tech companies. Further, his trade policies will create havoc with tech company supply chains that rely on manufacturing across Asia, and much on China, dramatically raising costs. Additionally these policies will cause foreign markets to purchase less tech products, damaging tech sales.

As a result, rapidly, big, successful tech stocks have been massacred:

Yet, nothing has happened. These companies are still doing exactly the same thing they did a month ago. Apple is still the no. 1 maker and seller of mobile devices. Facebook still dominates social media, has a huge lead in social media advertising, and continues to launch additional functionality to make its site sticky for users. Netflix is still the leader in streaming and developing new original content outside of networks. Google is still the  king of search and no. 1 in search advertising. And Amazon still leads all competitors in online commerce, and will have another great holiday season the next six weeks.

None of these businesses have been destroyed by the election. And the trends that drove their long-term growth remain in place. People will continue to use mobile devices for more applications, turn to social media for communicating with friends and finding information, download movies and other shows via the web, search for answers to most of their questions via search engines and buy more and more stuff online. These trends will not change, as there is pretty much no way Donald Trump or Congress can stop them.

Meanwhile, valuations of long-time laggard companies are suddenly hitting new highs. Somehow the trend to globalization will be ended, budget problems will be immediately resolved leading to greater spending capability by Congress and concerns about long-term debt build-up will disappear encouraging massive new investments in traditional infrastructure like roads and bridges. New trends will suddenly emerge that will return the basics of the U.S. economy, the sector balances, to something akin to 1984.

Thus, traders have bid up prices of old-line manufacturers. Despite exiting financial services as well as its oil and gas business, making GE much smaller than it was a decade ago, GE has jumped from $28.25 to $30.50, a gain of 8%. Caterpillar Tractor has had five straight years of revenue declines, yet it also rose from $28.25 to $30.50 for a similar 8% gain.

Remarkably GE’s P/E (price/earnings multiple) is now 24! Cat’s is an even more remarkable 53! Companies that rely on manufacturing are being priced like tech stocks – or even greater! Apple’s P/E has fallento 13, Google’s is 27 (about the same as GE) and Facebook’s P/E of 46 is lower than Caterpillar’s.

Really? In one day major, global trends have reversed course, steering the economy back to the days when Jack Welch ran GE, and Caterpillar was selling gear to a booming U.S. forestry business as well as massive volumes to China and India for building their fledgling infrastructures? People will stop buying smartphones and give up their reliance on the internet for a vast array of daily tasks? And droves of young workers trained for tech jobs are going to staff up a massive rebuilding of U.S. manufacturing plants? Displaced workers, trained on equipment now wildly antiquated and uneconomic, will be retrained overnight to operate plants with far fewer employees and lots more high-tech equipment? And boomers will quit retiring and undertake retraining – not for tech jobs but for manufacturing or equipment operator jobs?

Trends propel forward, and take people to greater productivity and a higher quality of life.  All those people who voted for Donald Trump are not tech avoiders. They are mobile, socially active people who are as linked to the trends as everyone who voted for Hillary Clinton. They don’t want to return to a pre-information economy lacking in technology that has made their lives better.  They still want technology in their lives, and they want that technology to become better, faster and cheaper.

And no manufacturer is going to go back to labor-intensive manufacturing. Whether they make things in the U.S. or offshore, state-of-the-art equipment means manufacturing simply uses fewer people. And the growth of e-commerce will not stop, thus continuing the trend of declining demand for retail workers.  These trends may alter slightly due to tax and trade policies, but they won’t reverse.

Smart investors don’t lose sight of long-term trends. They invest in companies where the opportunity exists to grow revenues and profits because demand for those company’s products and innovations are growing. With shares of the technology leaders beaten down, one should really consider if this is a time to sell, or buy. And with shares of companies that have terrible growth records, and stagnated earnings, bid up to extraordinarily high P/E multiples one should consider if this is the time to buy or sell.