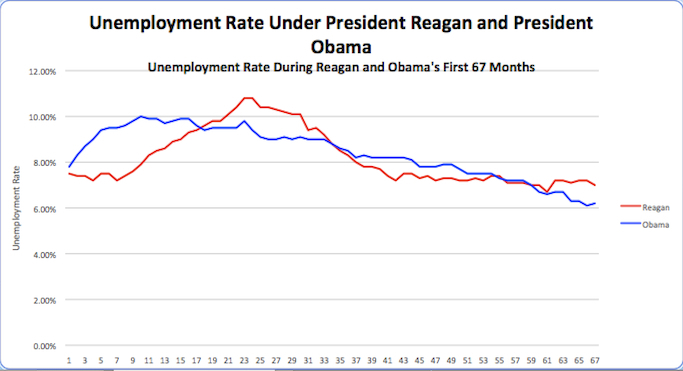 The Bureau of Labor Statistics (BLS) just issued America’s latest jobs report covering August.  And it’s a disappointment.  The economy created an additional 142,000 jobs last month. After 6 consecutive months over 200,000, most pundits expected the string to continue, including ADP which just yesterday said 204,000 jobs were created in August. So, despite the lower than expected August jobs number, America will create about 2.5 million new jobs in 2014.

One month variation does not change a trend

Even thought the plus-200k monthly string was broken (unless revised upward at a future date,) unemployment did continue to decline and is now reported at only 6.1%.  Jobless claims were just over 300k; lowest since 2007.  And that is great news.

Back in May, 2013 (15 months ago) the Dow was out of its recession doldrums and hitting new highs. I asked readers if Obama could, economically, be the best modern President?  Through discussion of that question, the #1 issue raised by readers was whether the stock market was a good economic barometer for judging “best.”  Many complained that the measure they were watching was jobs – and that too many people were still looking for work.

To put this week’s jobs report in economic perspective I reached out to Bob Deitrick, CEO of Polaris Financial Partners and author of “Bulls, Bears and the Ballot Box” (which I profiled in October, 2012 just before the election) for some explanation.  Since then Polaris’ investor newsletters have consistently been the best predictor of economic performance. Better than all the major investment houses. 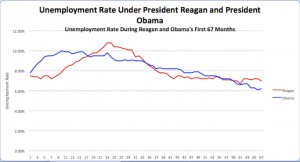 Bob Deitrick – “President Reagan has long been considered the best modern economic President.  So we compared his performance dealing with the oil-induced recession of the 1980s with that of President Obama and his performance during this ‘Great Recession.’

We forecast unemployment will fall to around 5.4% by summer, 2015.  A rate President Reagan was unable to achieve during his two terms.”

What about the Labor Participation Rate?

Much has been made about the poor results of the labor participation rate, which has shown more stubborn recalcitrance as this rate remains higher even as jobs have grown. 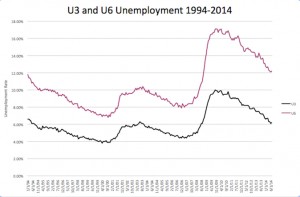 Bob Deitrick: “The labor participation rate adds in jobless part time workers and those in marginal work situations with those seeking full time work.  This is not a “hidden” unemployment.  It is a measure tracked since 1900 and called ‘U6.’ today by the BLS.

As this chart shows, the difference between reported unemployment and all unemployment – including those on the fringe of the workforce – has remained pretty constant since 1994. 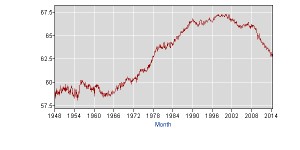 Labor participation is affected much less by short-term job creation, and much more by long-term demographic trends. As this chart from the BLS shows, as the Baby Boomers entered the workforce and societal acceptance of women working changed labor participation grew.

Now that ‘Boomers’ are retiring we are seeing the percentage of those seeking employment decline.  This has nothing to do with job availability, and everything to do with a highly predictable aging demographic.

What’s now clear is that the Obama administration policies have outperformed the Reagan administration policies for job creation and unemployment reduction.  Even though Reagan had the benefit of a growing Boomer class to ignite economic growth, while Obama has been forced to deal with a retiring workforce developing special needs. During the 8 years preceding Obama there was a net reduction in jobs in America.  We now are rapidly moving toward higher, sustainable jobs growth.”

When President Obama took office America was gripped in an offshoring boom, started years earlier, pushing jobs to the developed world.  Manufacturing was declining, and plants were closing across the nation.

This week the Institute for Supply Management (ISM) released its manufacturing report, and it surprised nearly everyone.  The latest Purchasing Managers Index (PMI) scored 59, 2 points higher than July and about that much higher than prognosticators expected.  This represents 63 straight months of economic expansion, and 25 consecutive months of manufacturing expansion.

New orders were up 3.3 points to 66.7, with 15 consecutive months of improvement and reaching the highest level since April, 2004 – 5 years prior to Obama becoming President.  Not surprisingly, this economic growth provided for 14 consecutive months of improvement in the employment index.  Meaning that the “grass roots” economy made its turn for the better just as the DJIA was reaching those highs back in 2013 – demonstrating that index is still the leading indicator for jobs that it has famously always been.

As the last 15 months have proven, jobs and economy are improving, and investors are benefiting

The stock market has converted the long-term growth in jobs and GDP into additional gains for investors.  Recently the S&P has crested 2,000 – reaching new all time highs.  Gains made by investors earlier in the Obama administration have further grown, helping businesses  raise capital and improving the nest eggs of almost all Americans.  And laying the foundation for recent, and prolonged job growth. 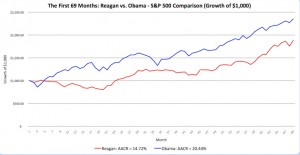 Bob Deitrick: While most Americans think they are not involved with the stock market, truthfully they are.  Via their 401K, pension plan and employer savings accounts 2/3 of Americans have a clear vested interest in stock performance.

As this chart shows, over the first 67 months of their presidencies there is a clear “winner” from an investor’s viewpoint. A dollar invested when Reagan assumed the presidency would have yielded a staggering 190% return.  Such returns were unheard of prior to his leadership.

However, it is undeniable that President Obama has surpassed the previous president.  Investors have gained a remarkable 220% gain over the last 5.5 years!  This level of investor growth is unprecedented by any administration, and has proven quite beneficial for everyone.

In 2009, with pension funds underfunded and most private retirement accounts savaged by the financial meltdown and Wall Street losses, Boomers and Seniors were resigned to never retiring.  The nest egg appeared gone, leaving the ‘chickens’ to keep working.  But now that the coffers have been reloaded increasingly people age 55 – 70 are happily discovering they can quit their old jobs and spend time with family, relax, enjoy hobbies or start new at-home businesses from their laptops or tablets.  It is due to a skyrocketing stock market that people can now pursue these dreams and reduce the labor participation rates for ‘better pastures.”

There is another election in just 8 weeks.  Statistics will be bandied about.  Monthly data points will be hotly contested.  There will be a lot of rhetoric by candidates on all sides.  But, understanding the prevailing trends is critical.  Recognizing that first the economy, then the stock market and now jobs are all trending upward is important – even as all 3 measures will have short-term disappointments.

Although economic performance has long been a trademark issue for Republican candidates, there was once a Democratic candidate that won the presidency by focusing on the economy and jobs (Clinton,) and his popularity has never been higher! President Obama’s popularity is not high, and seems to fall daily.  This seems incongruous with his incredible performance on the economy and jobs, which has outperformed his party predecessor – and every other modern President.

There are a lot of reasons voters elect a candidate.  Jobs and the economy are just one category of factors.  But, for those who place a high priority on jobs, economic performance and the markets the data clearly demonstrates which presidential administration has performed best.  And shows a very clear trend one can expect to continue into 2015.

Economically, President Obama’s administration has outperformed President Reagan’s in all commonly watched categories.  Simultaneously the current administration has reduced the debt, which skyrocketed under Reagan.  Additionally, Obama has reduced federal employment, which grew under Reagan (especially when including military personnel,) and truly delivered a “smaller government.”  Additionally, the current administration has kept inflation low, even during extreme international upheaval, failure of foreign economies (Greece) and a dramatic slowdown in the European economy.