Trump vs. Clinton – Which Party Is Better for the Economy? 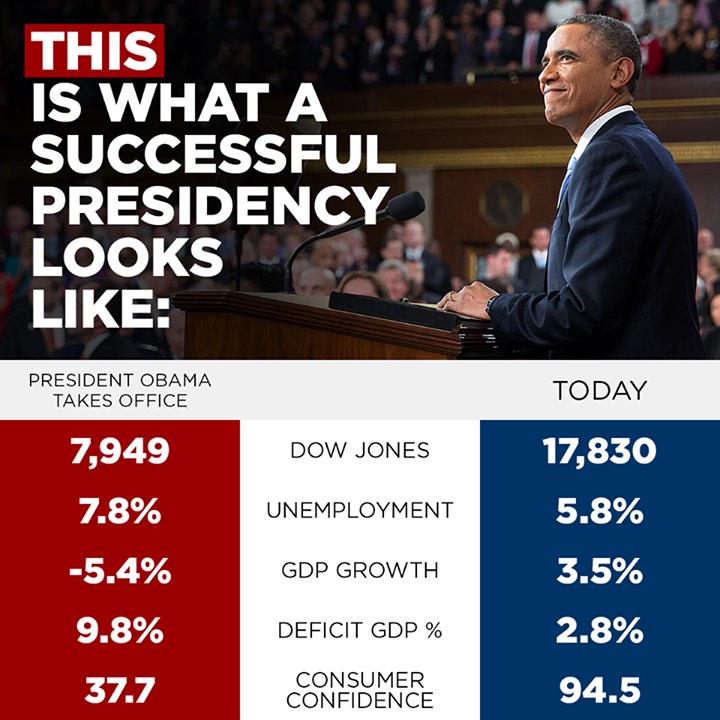 Donald Trump has been campaigning on how poorly America’s economy is doing. Yet, the headlines don’t seem to align with that position. Today we learned that U.S. household net worth climbed by over $1trillion in the second quarter. Rising stock values and rising real estate values made up most of the gain. And owners’ equity in their homes grew to 57.1%, highest in over a decade. Simultaneously this week we learned that middle-class earnings rose for the first time since the Great Recession, and the poverty rate fell by 1.2 percentage points.

Gallup reminded us this month that the percentage of Americans who perceive they are “thriving” has increased consistently the last 8 years, from 48.9% to 55.4%. And Pew informed us that across the globe, respect for Americans has risen the last 8 years, doubling in many countries such as Britain, Germany and France – and reaching as high as 84% favorability in Isreal. 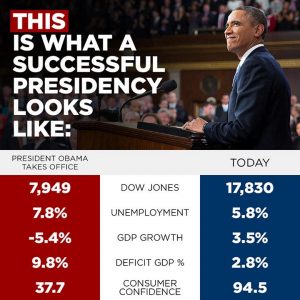 Meanwhile Oxford Economics projected that a Republican/Trump Presidency would knock $1trillion out of America’s economy, and lower the GDP by 5%, mostly due to trade and tax policies. These would be far-reaching globally, likely not only creating a deep recession in America, but quite possibly the first global recession. But a Clinton Presidency should maintain a 1.5%-2.3% annual GDP growth rate.

I thought it would be a good idea to revisit the author of “Bulls, Bears and the Ballot Box,” Bob Deitrick. Bob contributed to my 2012 article on Democrats actually being better for the economy than Republicans, despite popular wisdom to the contrary.

AH – Bob, there are a lot of people saying that the Obama Presidency was bad for the economy. Is that true?

Obama’s administration has recovered all losses from the Bush crash, and gained more. Looking back further, we can see this is a common pattern. All 6 of the major market crashes happened under Republicans – Hoover (1), Nixon (2), Reagan (1) and Bush (2). The worst crash ever was the 58% decline which happened in 17 months of 2007-2009, during the Bush administration. But we’ve had one of the longest bull market runs in Presidential history under Obama. Consistency, stability and predictability have been recent Democratic administration hallmarks, keeping investors enthusiastic.

AH – But what about corporate profits?

AH – What about jobs?

AH – What about the wonkish stuff, like debt creation? Many people are very upset at the large amount of debt added the last 8 years.

Deitrick – All debt has to be compared to the size of the base. Take for example a mortgage. Is a $1million mortgage big? To many it seems huge. But if that mortgage is on a $5million house, it is only 20% of the asset, so not that large. Likewise, if the homeowner makes $500,000 a year it is far less of an issue (2x income) than if the homeowner made $50,000/year (20x income.)

The Reagan administration really started the big debt run-up. During his administration national debt tripled – increased 300%. This was an astounding increase in debt. And the economy was much smaller then than today, so the debt as a percent of GDP doubled – from 31.1% to 62.2%%. This was the greatest peacetime debt increase in American history.

During the Obama administration total debt outstanding increased by 63.5% – which is just 20% of the debt growth created during the Reagan administration. As a percent of GDP the debt has grown by 28% – just about a quarter of the 100% increase during Reagan’s era. Today we have an $18.5trillion economy, 4 to 6 times larger than the $3-$5trillion economy of the 1980s. Thus, the debt number may appear large, but it is nothing at all as important, or an economic drag, as the debt added by Republican Reagan.

Digging into the details of the Obama debt increase (for the wonks,) out of a total of $8.5trillion added 70% was created by 2 policies implemented by Republican Bush. Ongoing costs of the Afghanistan war has accumulated to $3.6trillion, and $2.9trillion came from the Bush tax cuts which continued into 2003. Had these 2 Republican originated policies not added drastically to the country’s operating costs, debt increases would have been paltry compared to the size of the GDP. So it hasn’t been Democratic policies, like ACA (Affordable Care Act), or even the American Reinvestment and Recovery Act which has led to home values returning to pre-crisis levels, that created recent debt, but leftover activities tied to Republican Bush’s foray into Afghanistan and Republican policies of cutting taxes (mostly for the wealthy.)

Since Reagan left office the U.S. economy has grown by $13.5trillion. 2/3 of that (67%) happened during Clinton and Obama (Democrats) with only 1/3 happening during Bush and Bush (Republicans.)

AH – What about public sentiment? Listening to candidate Trump one would think Americans are extremely unhappy with President Obama.

Deitrick – The U.S. Conference Board’s Consumer Confidence Index was at a record high 118.9 when Democrat Clinton left office. Eight years later, ending Republican Bush’s administration, that index was at a record low 26.8. Today that index is at 101.1. Perhaps candidate Trump should be reminded of Senator Daniel Patrick Moynihan’s famous quote “everyone is entitled to his own opinion, but not to his own facts.”

Candidate Trump’s rhetoric makes it sound like Americans live in a crime-filled world – all due to Democrats. But FBI data shows that violent crime has decreased steadily since 1990 – from 750 incidents per 100,000 people to about 390 today. Despite the rhetoric, Americans are much safer today than in the past. Interestingly, however, violent crime declined 10.2% in the second Bush’s 8 year term. But during the Clinton years violent crime dropped 34%, and during the Obama administration violent crime has dropped 17.8%. Democratic policies of adding federal money to states and local communities has definitely made a difference in crime.

Despite the blistering negativity toward ACA, 20million Americans are insured today that weren’t insured previously. That’s almost 6.25% of the population now with health care coverage – a cost that was previously born by taxpayers at hospital emergency rooms.

Deitrick – We predicted that the Obama administration would be a great boon for Americans, and it has. Unfortunately there are a lot of people who obtain media coverage due to antics, loud voices, and access obtained via wealth that have spewed false information. When one looks at the facts, and not just opinions, it is clear that like all administrations the last 90 years Democrats have continued to be far better economic stewards than Republicans.

It is important people know the facts. For example, it would have kept an investor in this great bull market – rather than selling early on misplaced fear. It would have helped people to understand that real estate would regain its lost value. And understand that the added debt is not a great economic burden, especially at the lowest interest rates in American history.

[Author’s note: Bob Deitrick is CEO of Polaris Financial Partners, a private investment firm in suburban Columbus, Ohio. His firm uses economic and political tracking as part of its analysis to determine the best investments for his customers – and is proud to say they have remained long in the stock market throughout the Obama administration gains. For more on their analysis and forecasts contact PolarsFinancial.net]