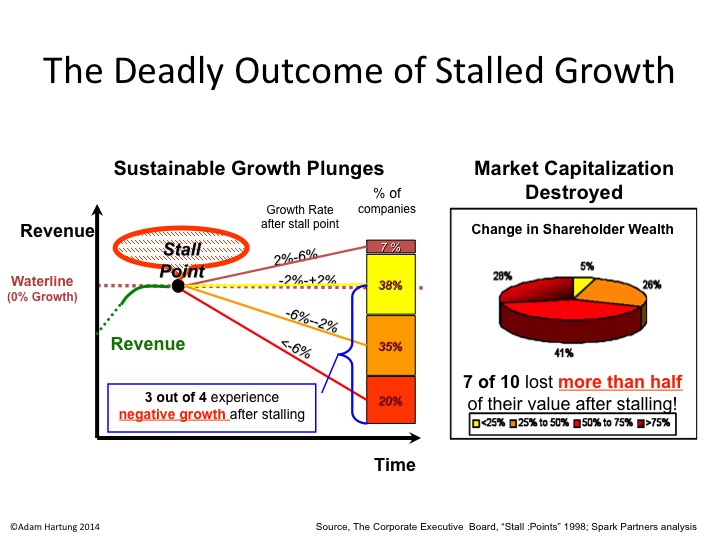 McDonald’s is in a Growth Stall.  Even though the stock is less than 10% off its recent 52 week high (which is about the same high it’s had since the start of 2012,) the odds of McDonald’s equity going down are nearly 10x the odds of it achieving new highs. 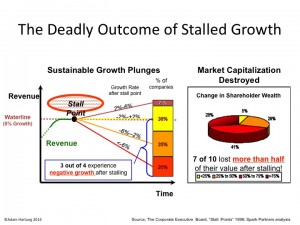 When companies hit a growth Stall, 93% of the time they are unable to maintain even a 2% growth rate. 55% fall into a consistent revenue decline of more than 2%. 1 in 5 drop into a negative 6%/year revenue slide. 69% of Growth Stalled companies will lose at least half their market capitalization in just a few years. 95% will lose more than 25% of their market value.

Back in February, McDonalds sales in USA stores open at least 13 months fell 1.4%.  By May these same stores reported reported their 7th consecutive month (now more than 2 quarters) of declining revenues. And in July McDonald’s reported the worst sales decline in over a decade – with stores globally selling 2.5% less (USA stores were down 3.2% for the month.)  McDonald’s leadership is now warning that annual sales will be weaker than forecast – and could well be a reported decline.

While McDonald’s has been saying that Asian store revenue growth had offset the USA declines, we now can see that the USA drop is the key signal of a stall.  There was no specific program in Asia to indicate that offshore revenues could create a renewed uptick in USA sales.  Now with offshore sales plummeting we can see that McDonald’s American performance is the lead indicator of a company with serious performance issues.

Growth Stalls are a great forecasting tool because they indicate when a company has become “out of step” with its marketplace.  While management, and in fact many analysts, will claim that this performance deficit is a short term aberration which will be repaired in coming months, historical evidence — and a plethora of case stories – tell us that in fact by the time a Growth Stall shows itself (especially in a company as large as McDonald’s) the situation is far more dire (and systemic) than management would like investors to believe.

Something fundamental has happened in the marketplace, and company leadership is busy trying to defend its historical business in the face of a major change that is pulling customers toward substitute solutions.  Frequently this defend & extend approach exacerbates the problems as retrenchment efforts further hurt revenues.

McDonald’s has reached this inflection point as the result of a long string of leadership decisions which have worked to submarine long-term value.

Back in 2006 McDonald’s sold its fast growing Chipotle chain in order to raise additional funds to close some McDonald’s stores, and undertake an overhaul of the supply chain as well as many remaining stores.  This one-time event was initially good for McDonald’s, but it hurt shareholders by letting go of an enormously successful revenue growth machine.

Since that sale Chipotle has outperformed McDonalds by 3x, and it was clear in 2011 that investors were better off with the faster growing Chipotle than the operationally focused McDonald’s.  Desperate for revenues as its products lagged changing customer tastes, by December, 2012 McDonald’s was urging franchisees to stay open on Christmas Day in order to add just a bit more to the top line.  However, such operational tactics cannot overcome a product line that is fat-and-carb-heavy and off current customer food trends, and by this July was ranked the worst burger in the marketplace.  Meanwhile McDonald’s customer service this June ranked dead last in the industry.  All telltale signs of the problems creating the emergent Growth Stall.

Meanwhile, McDonald’s is facing a significant attack on its business model as trends turn toward higher minimum wages.  By August, 2013 the first signs of the trend were clear – and the impact on McDonald’s long-term fortunes were put in question.  By February, 2014 the trend was accelerating, yet McDonald’s continued ignoring the situation.  And this month the issue has become a front-and-center problem for McDonald’s investors as the National Labor Relations Board (NLRB) has said it will not separate McDonald’s from its franchisees in pay and hours disputes – something which opens McDonald’s deep pockets to litigants looking to build on the living wage trend.

The McDonald’s CEO is somewhat “under seige” due to the poor revenue and earnings reports.  Yet, the company continues to ascribe its Growth Stall to short-term problems such as a meat processing scandal in China.  But this inverts the real situation. Such scandals are not the cause of current poor results.  Rather, they are the outcome of actions taken to meet goals set by leadership pushing too hard, trying to achieve too much, by defending and extending an outdated success formula desperately in need of change to meet new competitive market conditions.

Application of Growth Stall analysis has historically been very valuable.  In May, 2009 I reported on the Growth Stall at Motorola which threatened to dramatically lower company value.  Subsequently Motorola spun off its money losing phone business, sold other assets and businesses, and is now a very small remnant of the business prior to its Growth Stall; which was brought on by an overwhelming market shift to smartphones from 2-way radios and traditional cell phones.

In May, 2008 the Growth Stall at AIG portended big problems for the Dow Jones Industrial (DJIA) giant as financial markets continued to shift radically and quickly.  By the end of 2008 AIG stock cratered and the company was forced to wipe out shareholders completely in a government-backed restructuring.

Perhaps the most compelling case has been Microsoft.  By February, 2010 a Growth Stall was impending (and confirmed by May, 2011) warning of big changes for the tech giant.  Mobile device sales exploded, sending Apple and Google stocks soaring, while Microsoft’s primary, core market for PCs (and software for PCs) has fallen into decline.  Windows 8 subsequently had a tepid market acceptance, and gained no traction in mobile devices, causing Microsoft to write-off its investment in the Surface tablet.  Recent announcements about enormous lay-offs, with vast cuts in the acquired Nokia handheld unit, do not bode well for long-term revenue growth at the decaying (yet cash rich) giant.

As the Dow has surged to record highs, it has lifted all boats.  Including those companies which are showing serious problems.  It is easy to look at the ubiquity of McDonald’s stores and expect the chain to remain forever dominant.  But, the company is facing serious strategic problems with its products, service and business model which leadership has shown no sign of addressing.  The recent Growth Stall serves as a key long-term indicator that McDonald’s is facing serious problems which will most likely seriously jeopardize investors’ (as well as employees’, suppliers’ and supporting communities’) potential returns.