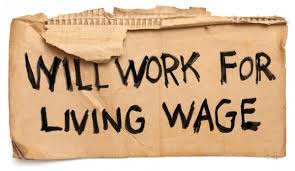 There is a definite trend to raising the minimum wage.  Regardless your political beliefs, the pressure to increase the minimum wage keeps growing.  The important question for business leaders is, “Are we prepared for a $12 or $15 minimum wage?”

President Obama began his push for raising the minimum wage above $10 a year ago in his 2013 State of the Union.  Since then, several articles have been written on income inequality and raising the minimum wage.  Although the case to raise it is not clear cut, there is no doubt it has increased the rhetoric against the top 1% of earners.  And now the President is mandating an increase in the minimum wage for federal workers and contractors to $10.10/hour, despite lack of congressional support and flak from conservatives.

Whether the economic case is provable, it appears that public sentiment is greatly in favor of a much higher minimum wage.  And it will not affect all companies the same.  Those that depend upon low priced labor, such as retailers like Wal-Mart and fast food companies like McDonald’s have a much higher concern.  As should their employees, suppliers and investors.

A recent Federal Reserve report took a specific look at what happens to fast food companies when the minimum wage goes up, such as happened in Illinois, California and New Jersey.  And the results were interesting.  Because they discovered that a higher minimum wage really did hurt McDonald’s, causing stores to close.  But….. and this is a big but…. those closed stores were rapidly replaced by competitors that could pay the  higher wages, leading to no loss of jobs (and an overall increase in pay for labor.)

The implications for businesses that use low-priced labor are clear.  It is time to change the business model – to adapt for a different future.  A higher minimum wage does not doom McDonald’s – but it will force the company to adapt.  If McDonald’s (and Burger King, Wendy’s, Subway, Dominos, Pizza Hut, and others) doesn’t adapt the future will be very ugly for their customers and the company.  But if these companies do adapt there is no reason the minimum wage will hurt them particularly hard.

The chains that replaced McDonald’s closed stores were Five Guys, Chick-fil-A and Chipotle.  You might remember that in 1998 McDonald’s started investing in Chipotle, and by 2001 McDonald’s owned the chain.  And Chipotle’s grew rapidly, from a handful of restaurants to over 500.  But then in 2006 McDonald’s sold all its Chipotle stock as the company went IPO, and used the proceeds to invest in upgrading McDonald’s stores and streamlining the supply chain toward higher profits on the “core” business.

Now, McDonald’s is shrinking while Chipotle is growing.  Bloomberg/BusinessWeek headlined “Chipotle: The One That Got Away From McDonalds” (Oct. 3, 2013.) Investors were well served to trade in McDonald’s stock for Chipotle’s.  And franchisees have suffered through sales problems as they raised prices off the old “dollar menu” while suffering higher food costs creating shrinking margins.  Meanwhile Chipotle’s franchisees have been able to charge more, while keeping customers very happy, and maintain margins while paying higher wages.  In a nutshell, Chipotle’s (and similar competitors) has captured the lost McDonald’s business as trends favor their business.

So McDonald’s obviously made a mistake.  But that does not mean “game over.”  All McDonald’s, Burger King and Wendy’s need to do is adapt.  Fighting the higher minimum wage will lead to a lot of grief.  There is no doubt wages will go up.  So the smart thing to do is figure out what these stores will look like when minimum wages double.  What changes must happen to the menu, to the store look, to the brand image in order for the company to continue attracting customers profitably.

This will undoubtedly include changes to the existing brands.  But, these companies also will benefit from revisiting the kind of strategy McDonald’s used in the 1990s when buying Chipotle’s.  Namely, buying chains with a different brand and value proposition which can flourish in a higher wage economy.  These old-line restaurants don’t have to forever remain dominated by the old brands, but rather can transition along with trends into companies with new brands and new products that are more desirable, and profitable, as trends change the game.  Like The Limited did when selling its stores and converting into L Brands to remain a viable company.

Now is the time to take action.  Waiting until forced to take action will be too late.  If McDonald’s and its brethren (and Wal-Mart and its minimum-wage-paying retail brethren) remain locked-in to the old way of doing business, and do everything possible to defend-and-extend the old success formula, they will follow Howard Johnson’s, Bennigan’s, Circuit City, Sears and a plethora of other companies into brand, and profitability, failure.  Fighting trends is a route to disaster.

However, by embracing the trend and taking action to be successful in a future scenario of higher labor these companies can be very successful.  There is nothing which dictates they have to follow the road to irrelevance while smarter brands take their place.  Rather, they need to begin extensive scenario planning, understand how these competitors succeed and take action to disrupt their old approach in order to create a new, more profitable business that will succeed.

Disruptions happen all the time.  In the 1970s and 1980s gasoline prices skyrocketed, allowing offshore competitors to upend the locked-in Detroit companies that refused to adapt.  On-line services allowed Google Maps to wipe out Rand-McNally, Travelocity to kill OAG and Wikipedia to kill bury Encyclopedia Britannica.  These outcomes were not dictated by events.  Rather, they reflect an inability of an existing leader to adapt to market changes.  An inability to embrace disruptions killed the old competitors, while opening doors for new competitors which embraced the trend.

Now is the time to embrace a higher minimum wage.  Every business will be impacted.  Those who wait to see the impact will struggle.  But those who embrace the trend, develop future scenarios that incorporate the trend and design new business opportunities can turn this disruption into a big win.