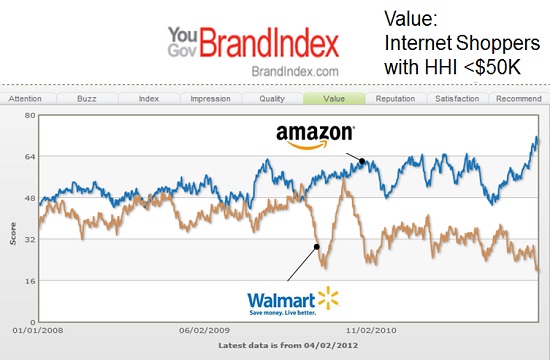 Retail sales fell .9% in December.  Even excluding autos and gasoline, retail sales fell .3%. Further, November retail sales estimates were revised downward from an initial .7% gain to a meager .4%, and October sales advances were revised downward from a .5% gain to a mere .3%.  Sales were down at electronic stores, clothing stores and department stores – all places we anticipated gains due to an improving economy, more jobs and more cash in consumer pockets.

Whoa, what’s happening?  Wasn’t lower gasoline pricing going to free up cash for people to go crazy buying holiday gifts?  Weren’t we all supposed to feel optimistic about our jobs, higher future wages and more money to spend after that horrible Great Recession thus leading us to splurge this holiday?

There were early signals that conventional wisdom was going to be wrong.  Back on Black Friday (so named because it is supposedly the day when retailers turn a profit for the year) we learned sales came in a disappointing 11% lower than 2013.  Barron’s analyzed press releases from Wal-Mart, and discerned that 2014 was a weaker Black Friday than 2013 and probably 2012.  Simply put, fewer people went shopping on Black Friday than before, despite longer store hours, and they bought less.

So was this really a horrible holiday?

Retail store sales are only part of the picture.  Increasingly, people are shopping on-line – and we all know it.  According to ComScore, on-line sales made to users of PCs (this excludes mobile devices) were up 17% on Cyber Monday, in stark contrast to traditional brick-and-mortar.  Exceeding $2B, it was the largest on-line retail day in history.  The Day after Cyber Monday sales were up 27%, and the Green Monday (one week after Cyber Monday) sales were up 15% (all compared to year ago.)  Overall, the week after Thanksgiving on-line sales rose 14%, and on Thanksgiving Day itself sales were up a whopping 32%.  The week before Christmas (16th-21st) on-line sales surged 18%.  According to IBM Digital Analytics the on-line November-December sales were up 13.9% vs. 2013.

The trend has never been more pronounced.  Regardless of how much people are going to spend, they are spending less of it in traditional brick-and-mortar retail, and more of it on-line. 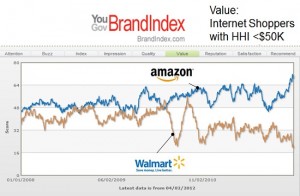 So, what about Wal-Mart?  The chain remains mired in its traditional way of doing business.  Even though same-store sales have been flat-to-down most of the last 2 years, and the number of full-line stores has declined in the USA, the chain remains committed quarter after quarter to defending its outdated success formula.  Even in China, where Alibaba has demonstrated it can grow on-line ecommerce revenues more than 50%/year, Wal-Mart continues to try growing with a physical presence – even though it has been a tough, unsuccessful slog.

Yet, despite its bribery scandal in Mexico undertaken to prop up revenues, lawsuits due to over-worked, stressed truck drivers having accidents on double shifts killing and injuring people, and an inability to grow, Wal-Mart’s stock trades at near all-time highs.  The stock has nearly doubled since 2011, even though the company is at odds with the primary retail, and demographic, trends.

On the other end of the spectrum is Amazon.com.  Amazon is still growing revenues at over 20%/year.  And introducing successful new publishing and internet service businesses, expanding same day delivery (and even one hour delivery) in urban markets like New York City, as well as expansion of its Prime service to include more original programming with famed director Woody Allen after winning the Golden Globe award for its original series Transparent.

However, several analysts were trash talking Amazon in 2014.  20% growth has them worried, given that the company once grew at 40%.  Even though Amazon’s growth is a serious reason companies like Wal-Mart cannot grow.  And there is the perennial lack of profitability – including a larger than expected loss in the second quarter ; a loss which included a $170M write-off on FirePhones which never really found a customer base.  The latter item led to a Fast Company brutal lambasting of CEO Jeff Bezos as a micro-manager out-of-touch with customers.

This lack of analyst support has seriously hurt Amazon.com share performance.  From 2010 to early 2014 the stock quadrupled in value from $100 to $400.  But over the past year the stock has fallen back 25%.  After dropping to $300/share in April, the stock has rallied but then retrenched no less than 3 times, and is now trading very close to its 52 week low.  And, it shows no momentum, trading below its moving average.

Which is why investors in Wal-Mart should sell, and reinvest in Amazon.com.

All the trends point to Wal-Mart being overvalued.  Its revenues show no signs of achieving any substantial growth.  And, despite its sheer size, all retail trends are working against the behemoth.  It has been trying to find a growth engine for 10 years, but nothing has come to fruition – including big investments in offshore markets.  The company keeps trying to defend & extend its old success formula, thus creating a bigger and bigger gap between itself and future market success.

Simultaneously, Amazon.com continues to invest in major developing trends.  From publishing to television programming to cloud/web services and even general retail, everything into which Amazon invests is growing.  And even though this is a company with $100B in revenues, it is still growing at a remarkable 20%.  While some analysts may wish the investment rate would slow, and that Amazon would never make mistakes (like Firephone,) the truth is that Amazon is putting money into projects which have pretty good odds of making sizable money as it helps change the game in  multiple markets.

Think of investing like paddling a canoe.  When you are investing against trends, it’s like paddling up the river.  You can make progress, but it is hard.  And, one little mistake and you easily slip backward.  Lose any momentum at all and you could completely turn around and disappear (like happened to Circuit City, and now both Sears and JCPenney.)  When you invest with the trends it is like paddling down the river.  The trend, like a current, keeps you moving in the right direction.  You can still make mistakes, but the odds are quite a lot higher you will make your destination easily, and with resources to spare.  That’s why the sales results for December are important. The show traditional retailers are paddling up river, while on-line retailers are paddling down-river.

I don’t know if Wal-Mart’s stock value has peaked, but it is hard to understand why anybody would expect it to go higher.  It could continue to rise, but there are ample reasons to expect investors will figure out how tough future profits will be for Wal-Mart and dispose of their positions.  On the other hand, even though Amazon.com could continue to slide down further there are even more reasons to expect it will have great future quarters with revenue gains and – eventually – those long-sought-after profits that some analysts seek.  Meanwhile, Amazon is investing in projects with internal rates of return far higher than most other companies because they are following major trends.  Odds are pretty good that in a few years the trends will make investors happy they own Amazon, and dropped out of Wal-Mart.